Mural painting on the side of EOS Lounge at 500 Anacapa Street (Photo: edhat reader)

Local artists are painting a new mural on the side of EOS Lounge to honor George Floyd and the Black Lives Matter movement.

The art piece was designed by Griffin Lounsbury, a multi-media artist in Santa Barbara, and assisted by local tattoo artist Chad Green. It's located in the 500 block of Anacapa Street and depicts a profile of Floyd with the words "Please, I Can't Breathe."

Floyd, an unarmed 46-year-old Black man, was murdered by four police officers on Thursday. While Floyd was handcuffed and lying face down on a city street during an arrest, a white police officer kept his knee on the right side of Floyd's neck for 8 minutes and 46 seconds. Floyd was unresponsive for the last 2 minutes and 53 seconds.

Several bystanders recorded the event on their phones with one video showing Floyd repeating "Please" and "I can't breathe." The murder sparked outrage in Minneapolis that rapidly spread throughout the United States and eventually overseas with marches, protests, and rallies.

The local chapter of Black Lives Matter held a peaceful rally on Sunday against police brutality with nearly 3,000 attendees. During the march, the Santa Barbara Police Department taped off the 200 block of E. Figueroa Street where the department is located and stationed approximately twenty officers in riot gear near the intersection.

The protest leaders repeatedly stated this was a peaceful demonstration and asked the officers, as well as Mayor Cathy Murillo, to kneel in solidarity. They all declined. 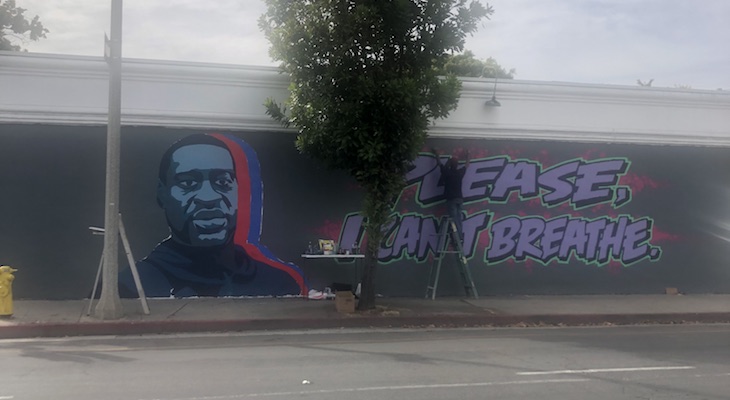 This is awesome. Maybe we can replace the Chromatic Gate with a similar mural.

No building permit or review by the Architectural Board of Review. The City needs to enforce it ordinances and have this and the others painted over. - They were already reported to enforcement months ago. - The only "mural" program in the City is in the Funk Zone. When will people just follow the rules?

You are the new law and order candidate. Someone else recently called himself that, I'm sure you are a big supporter.

10:41 - boo hoo... the "rules" didn't apply to George Floyd, so why should they apply to some paint on a building that reminds us ALL of what atrocities are happening to people of color? Quit your whining, at least you can BREATH.

to clarify - when I say the rules didn't apply, I mean there are no rules that allow a police officer to kneel on a man's throat until he's dead.

Your logic is typical of a sociopathic tweenager. Grow up. What will your next logical progression be ?

Ok Karen. Im sure you can program those hotlines into your phone.

Wonderful art. Now put it somewhere where it is permitted.

Beautiful piece of art, thank you for creating it! If the city is upset by its placement, the people will have something to say.

Nice but his death has nothing to do with SB, please put up something more germane to the local community. Before the hate responses...... I was mortified by his death and believe the cop (s) should be prosecuted to the fullest extent possible. No reason to loot, protesting ok

I think it's in a great place and much needed to remind everyone stop the hating.

Oops, there are deep deep roots of Black history in Santa Barbara and not only has it been ignored, it's been erased. This is a small step to acknowledge that erasure and the ongoing movement of Black people's rights. This has nothing to do with looting, the majority of protests are peaceful, it's the police that are initiating violence.

If you don't think that this national event has anything to do with Santa Barbara, maybe that is because we are primarily Caucasian and Latino here and don't have much understanding for racial problems in the US. The Indy ran an article on one of the black doctors in town recently and the problems he encountered- you might want to read that article to gain some understanding. Otherwise, keep up with your posts that seem to lack knowledge of reality.

Yeah, that was a good article in the Indy about Dr Horace McMillan.

Ok. So are we going to dedicate all our walls to the injustices of society? Really? This is a bad direction to go. Will this be allowed just because we are afraid of the mob if we don't do it? Let's have walls with rape victims, and child abuse victims and murder victims of other races, and war victims, system abuse victims, and etc. etc.... Ya, we have enough walls. Let's just make this whole town about victimhood. Because we are afraid not to. Hmmmmmm. That's a whole 'nuther kind of victimhood.

Wow. I'd be okay with more mural of survivors (not victims) if they were okay with the publicity. Why not recognize the people in our society who are normally hidden in the shadows? I don't see the sense in your arguments at all.

@ 8:24 - I completely agree and you said it well. That is one of the main messages of a certain segment of our population and what various politicians push on a constant basis, namely, the "I'm a victim because of you."

I don’t see it as a victimhood thing. I see the message as “let’s all figure out how to not let this happen again.”

Agreed maybe if he was local I would feel a little bit better about it.
It was completely wrong what happened to him and I think everyone agrees on that but we really don't need a mural the size of a whole building not to mention I bet its going to cause accidents with the amount of people going to look.

Sure are alot of racist people living here.

..This is America not just Santa Barbara, California we all live in America this was George Floyds home too not just yours...

boy... you are so offended by that. It's uncomfortable, isn't it? Thinking about all of the rape victims, abused children, murder victims, war victims, etc etc. Watching George Floyd die, suffer for 8 minutes is extraordinarily uncomfortable. You would not want to be reminded of it every day, would you? It has nothing to do with Santa Barbara, and how can a person enjoy our beautiful town if everywhere they looked, there was a picture of someone who was a victim. I hate to let the cat out of the bag, but everywhere you look there is a face of someone who has suffered in some capacity. Pretending it doesn't exist makes you culpable, just like the cops who watched George Floyd die and did nothing.

It would be nice if Betsy Green or Neal Graffy would provide some background about the "...deep deep roots of Black history in Santa Barbara" that have been ignored and erased. Possibly the poster who mentioned this can provide us with the details that have been erased?

The Santa Barbara Public Library has a website with historical photos of the Black community on the Central Coast: http://www.luna.blackgold.org/luna/servlet/view/all?sort=

NOT permitted. If it were any other subject they'd be out there whitewashing over it right now...... let's see how much the City bows to political pressure to allow something illegal to stay. You want the city looking like Lompoc, with murals everywhere, then fine, vote for it. But don't allow this.

Other unauthorized murals have taken months to be removed. Like Gator Boy. This one hasn’t gotten any special treatment yet. Stop imagining things.

agreed it should be taken care and get permits if they want to do it all over again.

Yes, but Gator Boy was not in such an in-your-face location. We need to memorialize the unjust death of George Floyd. The manner of his death deserves to be remembered and every major city in the USA should dedicate some form of remembrance to Floyd. This wonderful piece of artwork should be placed somewhere within our City. Putting up an unpermitted mural, however, is not legal and this needs to be removed until permitted and/or be placed elsewhere-----legally.

9:44 - If you feel so strongly, why don't you save the City some work and "whitewash" it yourself? Please let us know when you do, so we can come watch! It would be fun!

Part of the point of art is to elicit emotional response, so this seems to be a successful work of art. I'm sure the building owners will be cited by the City, but the City has to follow a process. I don't think they "allowed" this mural, the mural was installed with no approvals. As the City fights to have it removed, it will get more publicity.

Sure, I understand the commentary given the circumstances, but in terms of that particular spot, I think there should be a permanent memorial there for that poor bartender that got killed by a drunk driver at that same spot several years ago. I think about her every time I drive through that intersection.

Its a great piece of art but I agree with some of the others that it should not have been put up without permits.

I don't agree with what happened but I also don't think we needed this mural the size of a building for someone that's not even local. Why don't we do something like this for locals?

"Floyd, an unarmed 46-year-old Black man, was murdered by four police officers…" ///////////// Actually, only one was charged with murder, and so far he hasn't been found guilty, so I don't think we can call him a murderer just yet. I mean, yeah, of course he did it, but he hasn't been FOUND guilty yet, so he's not "officially" a murder. (Yet).

Rex, you are not able to come to a conclusion about something that we all have seem without our imperfect justice system telling you what to think? He might not be convicted, but he is definitely a murderer. Just like those cops that beat Rodney King were assaulters whether or not the Simi Valley jury agrees.

You're right, Pitmix. I forgot that in this country we're presumed guilty until proven innocent. Regardless of what we know and saw, Chauvin must still be PRESUMED innocent until PROVEN guilty.

Rex, I understand that being an older white man this doesn't affect you. Stay in your white bubble and continue to grumble about broken sidewalks and noisy planes. Let the rest of us learn from the people of color in our community about the inequities they deal with on a daily basis.

Rex, legally he is presumed innocent until he is convicted. This is a legal construct. Morally we all know what he did. So you would argue that the lynch mobs in the south that we deemed innocent by the all-white juries were truly innocent in your eyes? Seems like a corruption of the truth to me.

@12:19 pm: your abject ignorance is staggering.
Learn to read.

A lot of you are showing your white privilege. Anyone saying "this was a horrible event but..." is more concerned with permits than the blatant evidence that Black people are continually killed by the police in this country.