The Rincon Bluffs Preserve, a scenic oceanfront property zoned for a destination resort at the eastern edge of Carpinteria, is slated to be transferred this week to the city and managed forever as public open space.

The city is expected to close escrow on Friday on the 22-acre preserve at the junction of Carpinteria Avenue and Highway 150, purchasing it for $945,000 from the Land Trust for Santa Barbara County, a nonprofit preservationist group.

“This is much more than a local park: this is a regional treasure,” Matt Roberts, Carpinteria’s parks and recreation director, said this week. “It’s a very significant addition to the nature and trail network in Carpinteria.”

On Tuesday, the county Board of Supervisors approved the final $145,000 for the purchase; the money comes from funds that offshore oil and gas projects provide for coastal resource enhancement. The state Coastal Conservancy and Natural Resources Agency contributed the remaining $800,000. 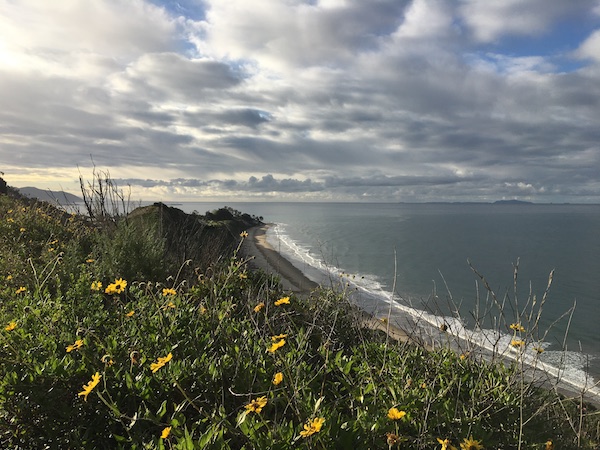 With the Rincon Bluffs in hand, the city hopes to nearly complete a five-mile public trail from the Carpinteria Salt Marsh to Rincon Beach, shown here. Anacapa Island lies to the south (Photo by Melinda Burns)

With the Rincon Bluffs in hand, Roberts said, the city hopes nearly to complete a five-mile public hiking and biking trail from the Carpinteria Salt Marsh Reserve east through the city’s Tar Pits Park and Carpinteria Bluffs Nature Preserve to the county’s Rincon Beach Park.

Ted Rhodes, president of Citizens for the Carpinteria Bluffs, a nonprofit group that was formed in 1996, said he felt fortunate to live in a small town with so much parkland.

“Time and time again, Carpinterians demonstrate how much they value open space and this beautiful natural environment that we live in,” he said. “The community remains very strong about saving more of the bluffs.”

At the close of escrow on Friday, the city will convey a conservation easement to the Land Trust, ensuring that the Rincon Bluffs can never be developed. The trust purchased the property in 2017 for $6 million in county and state grants and local donations. With a conservation easement, the land is worth much less – but to the community, Roberts said, “It’s priceless.”

For decades, Carpinterians fought off developers’ proposals for hotels, business parks, housing tracts and oil refineries on the bluffs. Arturo Tello, a Carpinteria landscape painter and former president of the citizens’ group, recalled this week how more than 3,000 donors, many of them schoolchildren and businesses armed only with collection cans, helped save the 52-acre Bluffs Nature Preserve. The property was purchased by the Land Trust in 1998 for $3.9 million, and the city took ownership in 2000. 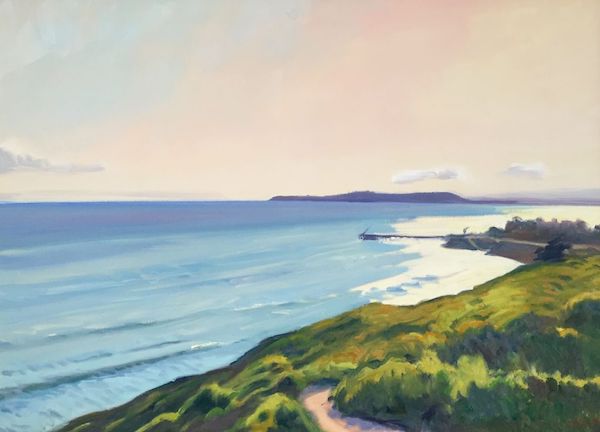 This oil painting by Arturo Tello, a past president of Citizens for the Carpinteria Bluffs, shows the Rincon Bluffs Preserve, looking east toward the Casitas Pier.

More than 1,400 individual donors stepped up to help save the Rincon Bluffs. For Carpinterians, Tello said, it’s all been “like winning the lottery, for sure.”

“Let’s not look at this as an opportunity to own something,” he said. “It’s an opportunity to give ourselves to something sacred. I have a firm belief that we can consecrate a place, and the way we do that is with our attention, our love and our presence.”

Tello said he paints on the bluffs “any day I can get out there,” using the eucalyptus trees and dirt paths as a foreground for the shifting light that plays on the land and the sea.

“This place is brimming with life,” Tello said.

In addition to a trail, the city plans to build a visitor parking lot, restroom, outdoor amphitheater and coastal overlooks at the Rincon Bluffs, Roberts said. Non-native vegetation will be replaced with native plants such as coastal sage and coastal scrub. The Land Trust will monitor and enforce the terms of the conservation easement. A $1 million endowment provided by the trust will help fund the improvements.

In all, the land generally known as the Carpinteria Bluffs covers about 150 acres east of City Hall. Private property there includes a golf driving range, a corporate office campus, and a former Chevron oil and gas processing plant that is being decommissioned.

“There might be opportunities to strengthen this coastal open space network in the future,” Roberts said.

I was one who donated to help keep The Bluffs. This news is a bit disconcerting. Look what Santa Barbara City did with the Wilcox Property. Well do I recall how many of us who worked so hard to protect the Wilcox and keep it as open space later felt regret that The City had possession. Butchering of trees, continual mowing down of weeds that are host plants for butterflies, getting rid of the live-in guardian, removal of dead wood, planting natives which could not be maintained during the drought, creating that useless "buffer zone," and so on. Thankfully, there wasn't the budget for the many other "improvements" proposed by The City. What a s--tshow that would have been. Sounds like Carp is already determined to add concrete and "improve" things at The Bluffs. What a shame.

An amphitheater seems like a bit too much, but it does need some management. I've seen vagrants camping in the brush, surrounded by litter and TP, and motorcycle (dirt bike) tracks on the walking trails. I've seen local office workers walking their dogs off-leash and not picking up doo-doo. I hope the City considers a Park Host setup to help out.

We worked on saving the Wilcox, spent over $3,000 in legal costs when sued by the developers in a slap suit. We worked with the County to design a nature preserve there, much like Carp will do with the bluffs. At the last minute a group came in and demanded that the property be turned into a "dog park". Gone was the preserve, and what came was what is there today. This will not happen to the bluffs with the Land Trust monitoring the preserve.

In reply to: MAR 27, 2020 09:47 AM--------Dog averse people are predictably prone to hyperbole. The DFP is not a "dog park." And saying/writing it is does not make it so. It is a multi-use open space. Go out there and you will see young couples (no dog), Mom's with kids in strollers (no dog), bike riders (no dog), joggers (no dog), paragliders (no dog), bird watchers (no dog), family groups (no dog), senior citizens (no dog). There was no "last minute" group that came in and "demanded" that the property use be mandated off-leash dog walkers only. DogPacSB worked with The City **for years** to make certain that historic off-leash use would be allowed to continue at the Wilcox. /////// Please tell us, who is "We?" I'm curious to know. Did you donate your time to save the space? Did you donate money? Did you work with Sue Higman and S.W.A.P. and other grassroots groups to Save the Wilcox? Did you go door-to-door when the issue of keeping The Wilcox as open space was placed on the ballot? Did you spend hours upon hours at City Council meetings, speak at the podium, talk with the Mayor? Did you meet with City Parks & Rec, and devote hours of your time interacting with Parks officials? Did you go out onto the property and educate users about donating and otherwise helping to Save the Wilcox?/////// Would you like to try and assume a different, more realistic take on the property? Go out and see for yourself who uses the park. Go out to the The Wilcox/DFP next time you are able and see all the people smiling and dogs smiling and everyone getting along. If you *really* don't enjoy being around dogs, last I checked there are 60 Parks within the City of Santa Barbara. And ------- only three of the 60 allow off-leash dogs. One park of the three is so remote and tiny that it gets little use by anyone at all, much less dogwalkers. Please note that at another of those three off-leash parks the dog owners must pay for the privilege of enjoying off-leash recreation. I hope I have helped put things in perspective for you.

Yes to all your questions. One of us was President of the Mesa Association through most of the years the project was considered, and for 20 years before, fighting every residential project that was proposed. The land was zoned for parkland and environmentally sensitive, and we spoke up in many many City Council meetings, along with others in our neighborhood. We were members of SWAP and worked with City Officials. We were in fact sued by developer Wayne Siemens for millions due to our activism and we successfully counter sued and was able to establish the envelope for the park which made their senior living project unfeasible. You are welcome to check on the lawsuit at the Courthouse. Be my guest. We lived on the border of the property for 35 years, until the parking all along our adjacent streets, noise, chaos and danger from the unleashed dogs led us to sell and move to Goleta, 5 years after the DFP was created. One of us was attacked on the property by an unleashed dog. I think the dog park stinks and that it should have been a nature preserve with leashed dogs.

Congrats to the city of Carpinteria! This property is a treasure the public will be able to enjoy!

HIP-HIP HOORAY!!! We need to protect our open spaces and our oceanfront properties from rampant development. I was one who worked to save the Wilcox, and I donated to the Bluffs too. How wonderful that many of us care so much about it to not let it be Orange County here. NO to any paved walkways, please, just let it be a nature preserve!!!

Have you heard about the Carpinteria Rincon Trail Project? Lots of concrete and chain link coming soon, with a bike trail that dumps into Rincon parking lot used by surfers. On the bright side, the blight should slide into the ocean in the next few decades.

Links to Carpinteria officials documentation on the project:
https://ceqanet.opr.ca.gov/2019109097/2

This is fantastic news for everyone. As much as my family I worked to make the Wilcox property "happen," we are completely saddened to see what it has become. If the City of Carpinteria makes the right decisions, the Carp Bluffs will NOT become another "Douglas Preserve" overrun by dog owners who don't mind their dogs (not all, but a high enough percentage to ruin it for many others).

Who will pay for the upkeep and monitoring? There needs to be some sort of support.

Oh my goodness, yet another

Bristol Farms to Open Next Week

The problem with Grocery

It's possible Harry was on a

Your emphasis on the skimpy

Your emphasis on the skimpy

Maybe it's Harry. Welcome to

Personally I'm fine with them

Tune in to the NAC meeting on