As a world-class and industry-leading performance facility, THE LAB has offered cryotherapy as one of its fundamental services since opening for business four years ago. Now, it has partnered with CRYO-ScienceTM—the world’s leading innovator and manufacturer of all cryogenic applications—to introduce the most technologically advanced cryotherapy machine in existence to the Santa Barbara community.

The team at THE LAB has installed CRYO-Science’sTM CRYO ArcticTM chamber, replacing its original cryosauna with the safest, coldest and most effective machine on the market. The CRYO ArcticTM is also the only true whole-body cryotherapy machine on the market—meaning the user’s head, neck and shoulders are incorporated into a full-body treatment. The CRYO ArcticTM is built using state-of-the art technology, adheres to the highest safety standards, was created to ensure that the user is never in direct contact with nitrogen vapors and has the ability to maintain minus 220 degrees Fahrenheit throughout an entire three-minute session. It also comes equipped with a music system, Bluetooth capability, Wi-Fi connectivity and multiple treatment options that give the user choice.

“CRYO-ScienceTM is the first to innovate within its industry in a long time, and it’s also the first cryo company to specifically develop scalable, single-person cryo chambers,” said THE LAB Operations Manager Bentley Nunes. “The CRYO ArcticTM is hands down the best machine because it’s made by cryogenic engineers focused on making the best machines they can.”

CRYO-Science’sTM chamber operates with much less pressure on its nitrogen tank than other machines on the market, resulting in a far colder sustained temperature. Additionally, the truly whole-body chamber places the user in an air-flow-controlled environment. Both of these features make for a dramatically improved experience, as observed by Nunes and THE LAB General Manager Ruth Loomer during their respective test sessions in the CRYO ArcticTM that ultimately led to their decision to purchase the chamber for their business.

“It feels much colder,” Nunes said. “It’s minus 220 degrees Fahrenheit the entire time that you’re in the chamber, and it’s a much smoother experience. Having all of the body completely exposed to the cool temperature creates more of a response to the cold and, therefore, a greater response to decreasing inflammation. I got to see firsthand how the CRYO ArcticTM delivers a much more effective treatment.”

THE LAB made for an ideal buyer of the CRYO ArcticTM for a variety of different reasons, according to CRYO-ScienceTM CEO Amir Amirsadeghi. Namely, THE LAB combines cryotherapy with numerous other services, such as NormaTec recovery systems and an AlterG anti-gravity treadmill. As the premier facility of its kind in Southern California, THE LAB also conducts its own research on the science behind cryotherapy.

Cryotherapy involves the use of low-temperature gases to expose the body to ultra-low temperatures for a short period of time, which has been shown to increase performance and decrease recovery time. The majority of the industry’s research surrounding the practice has been devoted to recovery and performance in athletics and pain management of arthritis. Other areas of research include treatment of depression, anxiety, insomnia, multiple sclerosis, psoriasis, fibromyalgia, ankylosing spondylitis, enhancement of immune function and improved cardiovascular function.

“Our commitment to science and innovation allows us to offer cryotherapy equipment that is consistently trustworthy, and the possibilities with CRYO-ScienceTM are endless,” Amirsadeghi said. “We see a strategic partnership with THE LAB, which in turn sees the tremendous possibilities of cryotherapy applied to its fitness, health and wellness industries.”

Nunes said he believes the CRYO ArcticTM and the partnership with CRYO-ScienceTM will further THE LAB’s mission of helping members and clients maximize their athletic performance potential and recover from both injuries and surgeries. He also invited those who have not yet tried cryotherapy to test its benefits at THE LAB.

“We’re looking forward to delivering this far superior cryotherapy experience to our clients with all of our other modalities included, and the cost will remain the same as it’s always been,” he said. “You’ve got to come give it a try. It’s proven to work. We’re doing research to show other ways that it affects the body, and we’ve seen it change lives. That is only going to increase with a more effective machine.”

ABOUT THE LAB
Located in the “Funk Zone” of Santa Barbara, THE LAB is a collaboration of best-in-class physical performance and wellness professionals focused on improving human performance by using cutting-edge research and techniques related to both athletic performance and individual wellness. THE LAB places an emphasis on building, restoring and regenerating the human body. At THE LAB, clients of all levels and abilities have access to the tools they need to improve, recover and perform at their full potential. Additional information about THE LAB is available at www.TheLabSB.com

ABOUT CRYO-SCIENCETM
CRYO-ScienceTM is a world-class equipment innovator and solution provider for all cryogenic applications. The
company has mastered the science of using low-temperature gases to deliver healing, preserving and longevity benefits to
the human body. CRYO-ScienceTM focuses on delivering innovative solutions in Cryotherapy and other customized installations with the single objective of allowing clients and users to thrive in their respective industries, including health care, sports and beauty. The North American headquarters are located in Houston, Texas with manufacturing facilities in Wrocław, Poland. Additional information about CRYO-ScienceTM can be found on www.cryosc.com

ABOUT CRYOTHERAPY
Additional information about the science of Cryotherapy and the medical research behind it can be found at both www.thelabsb.com/services/?act=17 and www.cryosc.com/cryogenic-science

SOURCES:
THE LAB and CRYO-ScienceTM 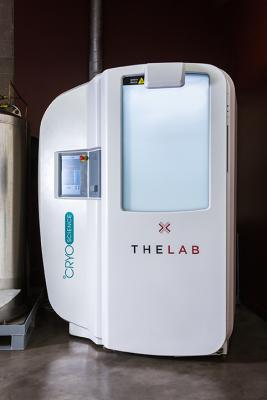