The Santa Barbara Symphony is pleased to announce its 2022/23 70th anniversary season. The Symphony, under the leadership of Music & Artistic Director Nir Kabaretti, an internationally recognized conductor who lives in Santa Barbara, has curated an expansive season that weaves community, collaboration, and cultural traditions into a nine-month musical journey that is uniquely Santa Barbara.

The Symphony’s 70th anniversary season highlights include the return of Carmina Burana, a world premiere of an Elmer Bernstein score, a tribute to the legendary John Williams, creative artistic collaborations with the Ensemble Theatre Company and the Santa Ynez Band of Chumash Indians, in addition to a stellar lineup of internationally renowned musicians scheduled to appear with the orchestra.

“It has been an honor to help define and shape the Santa Barbara Symphony over the past sixteen years of our history when we have worked with passion and enthusiasm to reflect and draw upon the treasures of our community,” shared Kabaretti. “Now more than ever, traditional symphonic music is inspired and influenced by diversity, culture, and an expansive range of contemporary musical genres. Jazz, Latin, pop, film scores, theater, and even the spoken word art form of Chumash descent are integrated into this season’s repertoire while celebrating The Symphony’s traditional essence. I can’t wait to share this journey with you!”

“The Symphony employs some of the most sought-after orchestral musicians on the West Coast, draws from a deep pool of globally recognized composers and guest artists, and nurtures rich, meaningful collaborations with fellow leading arts organizations,” Kathryn R Martin, President, and CEO of the Santa Barbara Symphony. “As we enter this milestone year, the Symphony’s purpose is stronger than ever as we deliver on our mission to create joy, connection, and impact through symphonic music for the next 70 years!”

Celebrate the Symphony’s 70th anniversary this season! All performances will take place live, in person at the Granada Theatre. Season subscriptions are on sale now with packages starting as low as $112 for a four-concert package, and $184 for a full seven-concert package. Two “One-Night-Only” events are available for subscribers to purchase: “New Year’s Eve with The Symphony” and “An Evening with Sinatra.” Single tickets go on sale on September 1, 2022. For subscriptions and ticket information visit www.TheSymphony.org or call 805-898-9386.

In a spectacular tour-de-force Season Opening, the Symphony continues its impactful tradition of performing arts collaboration to create new experiences for the community. More than 150 performers from State Street Ballet, Santa Barbara Choral Society, Quire of Voyces, and the Music Academy’s Sing! Children's Chorus join the Symphony on stage in a program that features a new ballet to Gabrielle Faure’s s pensive Pavane, a wildly decadent ode to wine and fertility with Camille Saint-Saëns’ Danse Bacchanale from the opera Samson and Delilah and concludes with Carl Orff’s beloved and powerful Carmina Burana.

Honoring the past in an intersection of connection, community, and culture, this program offers a symphonic and visual homage to the region’s centuries of Chumash heritage from local composer and preservationist Cody Westheimer, paired with Robert Schumann’s romantic musical gift to his future wife, the Piano Concerto in A minor, featuring world-renowned pianist and Santa Barbara favorite, Alessio Bax, Jean Sibelius’ Valse Triste, and Mozart’s inimitable masterpiece, Symphony No. 40.

A celebration of the influences of the music of the Americas - with local ties to Santa Barbara, includes Uruguayan-born, Grammy© nominated American composer Miguel del Aguila’s Concerto for Violin and Orchestra, Op. 94, The Journey of a Lifetime (El viaje de una vida), with violin soloist Guillermo Figueroa, and the world premiere of American composer and former Ojai resident, Elmer Bernstein’s Toccata for Toy Trains - his score for an animated film by Ray Charles Eames, orchestrated especially for the Santa Barbara Symphony by the composer’s son, Peter. Antonin Dvorak’s magnificent Symphony No. 9, From the New World, will round out the program.

This fascinating program will examine the mystery of transformation, from Maurice Ravel’s compelling Bolero, which begins small and ends like a tidal wave, to Richard Strauss’ Death and Transfiguration, about human transitioning. Symphony pianist Natasha Kislenko will join the orchestra to illuminate Dohnanyi’s Variations on Nursery Song, Op. 25, and Jazz at Lincoln Center’s saxophonist Ted Nash’s Transformation for Symphony Orchestra and Narrator, based on the composer’s personal journey, will feature Nash and his trio as soloists with the Symphony.

John Williams: A Cinematic Celebration
A multi-media tribute to John Williams, presented in partnership with The Granada Theatre
Saturday, March 18, 2023, at 7:30 pm, and Sunday, March 19, 2023, at 3 pm

“E.T.”, “Star Wars”, ''Jaws” — Five-time Oscar and 12-time Grammy-Award winner John Williams has been composing film scores for Hollywood’s blockbusters for more than 50 years. His collaborations with directors Stephen Spielberg and George Lucas, whose movies attained cult status, not least because of his unmistakable music, are legendary. Hear and watch these powerful cinematic moments come to life through the magic of live orchestral accompaniment.

This all-Beethoven and Beethoven-influenced program renews our enduring collaborative relationship with Ensemble Theatre Company’s Artistic Director, Jonathan Fox, who will direct the West Coast premiere of Ella Milch-Sheriff’s staged monodrama, The Eternal Stranger (based on a dream by Beethoven). Beethoven’s mighty Piano Concerto No. 5, Emperor, and the composer’s genial Symphony No. 4 concludes the program.

This platinum anniversary concert shines the spotlight on The Symphony’s brilliant principal players in Concerto Grosso, by American composer Jonathon Leshnoff, which was previously commissioned for the Symphony’s 60th anniversary. Violín soloist and multi-Grammy© nominee Philippe Quint brings his imaginative approach to Mendelssohn’s gorgeous Violin Concerto in E minor, Op. 64, one of the most prominent and highly regarded works in the concerto repertoire for violín, while Johannes Brahms’ monumental Symphony No. 1 in C minor, Op. 68 - which took the composer 21 years of revisions to declare ready for public performance in 1876 - will bring the evening - and the 70th Anniversary Season - to a triumphant close.

Few events evoke as many emotional, nostalgic and visceral responses as New Year’s Eve with The Symphony. Fan-favorite Bob Bernhardt returns to guest conduct a rousing program of glitz, glamor, and symphonic joy. This program sells out quickly; reserve your seats early!

Frank Sinatra was one of a kind — an iconoclast whose musical legacy and style are as enduring as was his charm. Relive the magical moments of ‘40s, ‘50s, ‘60s and beyond as critically acclaimed singer/pianist Tony DeSare takes us on a journey back to a time when swing was king and crooners ruled. Dress to impress and plan for an evening as unforgettable as “ol’ blue eyes” himself!

About the Santa Barbara Symphony

Celebrating its 70th Anniversary, The Santa Barbara Symphony delivers artistic excellence, outstanding music education stewardship and programming, and community collaboration - all through symphonic music. Under the artistic leadership of Maestro Nir Kabaretti as Music & Artistic Director since 2006, The Symphony is one of the region's premier cultural institutions. Through his charismatic leadership, this globally admired conductor and Santa Barbara resident invigorates audiences and musicians alike through his passion, creativity and vast experience. As the only music education program tied to a symphony orchestra in the region, The Symphony serves more than 10,000 students annually throughout Santa Barbara County. While The Symphony continues to evolve, its mission to bring joy, engagement, and connection remain steadfast pillars and were evident in the organization's ability to thrive during the pandemic including the historic announcement that board chair Janet Garufis and President & CEO Kathryn R Martin join Nir Kabaretti in making a five-year commitment to serve in their roles. For more information, visit TheSymphony.org. 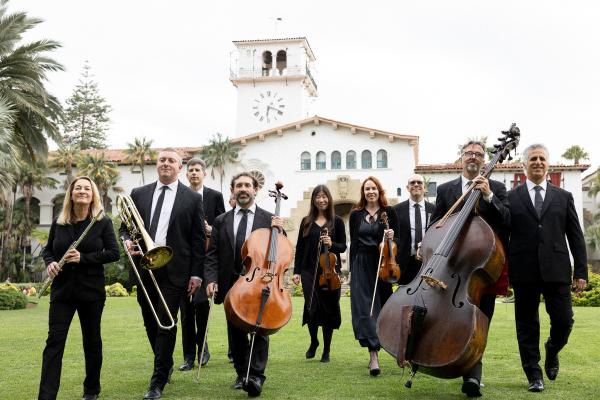 Yeah, the design change is

I'm so happy to see two

I know all the ultra

Das is a total sell out/empty