Amirah with her mother Audrey

The Santa Barbara Zoo will soon bid farewell to Amirah, their almost two-year-old female Masai giraffe, and Wyatt, their seven-year-old male Amur leopard, as part of their ongoing work to support two of the Association of Zoos and Aquariums’s (AZA) Species Survival Plans. The Species Survival Plan (SSP) was developed in 1981 by the AZA to help ensure the survival of selected species in zoos and aquariums, many of which are threatened or endangered in the wild.

Amirah, born at the Santa Barbara Zoo on March 14, 2018 to Audrey and Michael, will depart on March 10, 2020 (just shy of her second birthday) for the Sacramento Zoo. Giraffes typically become independent of their mothers around two years old and become mature enough to breed at three or four years old.

"Over the last few months as we’ve prepared for her departure, we’ve really noticed her personality come alive, and she has become more independent and brave, trying new things without her mom nearby,” shared Cassie Moews, Senior Keeper.

While she is still too young to breed right now, Amirah will have a breeding recommendation in the future. Amirah’s father Michael is the most genetically valuable Masai giraffe in the AZA North America population. Every calf of his serves a very important role in the SSP, as they will go on to have calves of their own and help maintain a healthy genetic diversity for the population. The Zoo is preparing for the birth of two giraffe calves, expected by Adia sometime in April and by Audrey sometime in July. 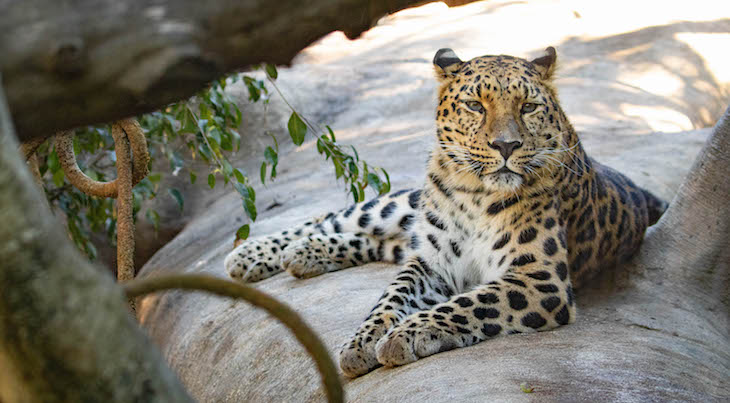 “Since Michael’s genes are the most valuable in North America, it’s critical for the genetic diversity of the AZA population that he continues to sire offspring, which is why we move calves to other zoos to make room for more offspring,” explains Rachel Ritchason, Director of Animal Collections at the Santa Barbara Zoo.

The Zoo is also preparing to say farewell to Wyatt, their male Amur leopard. Wyatt was born on April 25, 2012 at the Denver Zoo and arrived at the Santa Barbara Zoo on July 15, 2013. He will depart on March 10, 2020 for Fort Wayne Children’s Zoo in Indiana.

Wyatt and Ajax, the Zoo’s female Amur leopard, have been together for the past four years and despite efforts to breed for over three years, including artificial insemination, they have not been successful. As part of the SSP, Wyatt will move to another zoo to be paired with a different female, and the Zoo will soon welcome Kasha, a new male Amur leopard as a mate for Ajax.

Kasha is a nine-and-a-half-year-old Amur leopard coming from the Brookfield Zoo in Chicago, IL.  He was born in Nesles, France at Le Parc des Felins.  He was imported to the Brookfield Zoo in 2013, where he sired two litters in 2016 and 2018. Kasha will be in quarantine for a 30-day period, and will then be introduced to Ajax and meet the public.

Ajax, born on May 22, 2014 at Marwell Zoo in Hampshire, England, arrived at the Santa Barbara Zoo in 2016. “Her genetics are unrepresented in North American AZA zoos and aquariums, so Ajax has an important role of diversifying the gene pool of Amur leopards in North America for the overall health of the population,” explained Ritchason. “It’s important for her to breed and pass on her genes.”

The public is encouraged to visit the Santa Barbara Zoo and say goodbye to Amirah and Wyatt before they both depart on March 10 (Wyatt will only be out on Sunday, March 8). The Zoo thanks the Hutton Parker Foundation and the Wyatt family for sponsoring Amirah and Wyatt. To learn more about how to support the Zoo as an animal sponsor, please visit https://sbzoo.pivvit.com/foster-feeder.

On July 11, 2019, the International Union for Conservation of Nature announced that Masai giraffes are now endangered, primarily because of poaching and changes in land use. Of the nine subspecies of giraffes, Masai (the largest) and reticulated giraffes are endangered, and Nubian and Kordofan (KOR-doh-fan) giraffes are critically endangered. Find more information at www.iucnredlist.org/species/88421036/88421121

There are an estimated 35,000 Masai giraffes currently, but their population has fallen by nearly 50% in the last three decades. Africa’s overall giraffe population has decreased by up to 40% in that same timeframe.

Amur leopards are the most endangered big cats in the world. They have also been called the Korean leopard, Far East leopard, and Manchurian leopard, which echoes their historic range, spanning the Korean Peninsula into northeast China’s Jilin and Heilongjiang Provinces, and across the border into the Russian Far East and Amur River basin, from which the species now takes its name.

According to the Amur Leopard & Tiger Alliance (ALTA), there are fewer than 40 individuals left in the wild. The World Wildlife Fund cites 57. It is difficult to get an accurate count, as the animals are solitary and now live in rugged and remote areas.

The cats that remain are in a small area of Primorsky Kraiin Russia, between Vladivostok and the Chinese border. A few scattered individuals are estimated to exist in adjacent China. Are there any “Korean leopards” in Korea? Researchers think it is possible they may cross the border from China or Russian into Northern Korea, but “reliable information is lacking,” per ALTA. The last Amur leopard in South Korea was captured on the slopes of Odo Mountain in 1969. Their threats include poaching, forest fires, development, and, at this point, inbreeding.

Approximately 200 Amur leopards are in captivity, primarily in zoos in North America, Europe, and countries of the former Soviet Union, and are part of managed conservation breeding programs.

The Santa Barbara Zoo is one of the more than 200 accredited zoos and aquariums that participate in Species Survival Plans, a cooperative conservation program of the Association of Zoos and Aquariums.

Nearly 500 different species are managed, aimed at maintaining genetic diversity within captive populations, sustaining these captive populations, and guarding against extinction. But not every individual SSP animal breeds. Some may be too old, for example, or on exhibit by themselves. Others may not have the genetic makeup needed for diversity. Breeding decisions are made as part of both long and short term plans for what is needed within the captive population.

About The Santa Barbara Zoo
The Santa Barbara Zoo is open daily from 10 AM to 5 PM; general admission is $19.95 for adults, $11.95 for children 2-12, and free for children under 2. Parking is $11. The Santa Barbara Zoo is accredited by the Association of Zoos and Aquariums (AZA).  AZA zoos are dedicated to providing excellent care for animals, a great visitor experience, and a better future for all living things. With its more than 200 accredited members, AZA is a leader in global wildlife conservation and is the public’s link to helping animals in their native habitats. Visit www.sbzoo.org.
Please Login or Register to comment on this.

I have said it before here,

Vaccines and medications are

You mean the opposite of what

Not to mention the original

Lies again. It was not fading

For all those pointing out

Face Covering to Be Required Indoors Regardless of Vaccination Status

Have you read many of GT's

Because kids who have no real