Woman Dies After Vehicle Crashed Into Wall and MTD Bus

On Tuesday, November 29, 2017 at approximately 10:40 A.M. the Santa Barbara Police Department responded to a multi-injury vehicle collision that occurred on Cliff Drive near Montecito Street between an older model two-door Mercedes-Benz and a Santa Barbara Metropolitan Transit District Bus.

Just prior to the accident, a citizen called 911 to report a reckless driver traveling eastbound on Cliff Drive.  Immediately thereafter, multiple callers reported the collision.  From the description, it may be the same vehicle involved in both incidents.

The driver of the sedan appears to have first driven on to the sidewalk, collided with a rock wall on the southeast side of Cliff Drive, then careened fully across the double-yellow lines of the road hitting a safety railing on the opposing side of traffic, then ricocheted into the path of the bus.  The vehicle came to rest on the westbound side of Cliff Drive pinned between the curb line and the bus.  The driver of the bus does not appear at fault.   The bus was carrying 14 passengers none of whom complained of any injuries.

In total, 10 Police Officers, including a Lieutenant and two Sergeants responded to the scene.  Also responding were the Santa Barbara Fire Department and two American Medical Response ambulances.     Cliff Drive was completely closed for several hours to pedestrians and vehicle traffic while officers conducted a thorough collision investigation.  The incident was severe enough to activate a full call-out of the Critical Accident Team, a specialized traffic unit within the Santa Barbara Police Department who will reconstruct what happened.

The collision remains under investigation at this time.  Victim information will be released through the Santa Barbara County Coroner's office after next of kin have been notified.

Police are asking those who witnessed the incident to contact Santa Barbara Police Traffic Collison Investigator Ethan Ragsdale at 805-897-3719.

Fatal traffic collisions in the City of Santa Barbara are few and far between.  The last traffic-related fatality was in February of this year.

Traffic accident at the bottom of Cliff Drive. Two seat Mercedes vs. head on MTD bus. Primetime JP was already on the scene. 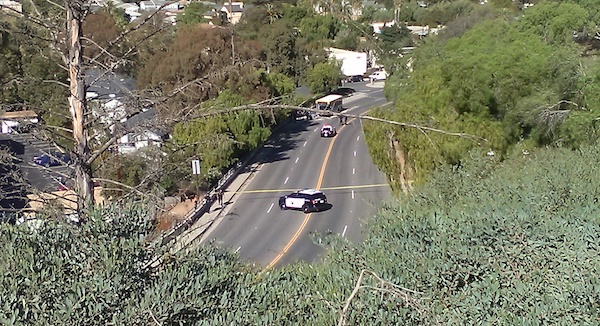 Write the mayor and members

MAC: You said it, the

SHASTA: How long did it take,

Where did you get the number

CSF: if I get my act

Outrageous and sad. This

Nice dodge away from