Of course, the answer to Contest #1, what year was the first historical Fiesta parade, was 1924. We provided quite the hint below stating the parade is in its 94th anniversary. Almost all of you got it right! We selected a winner at random and that was edhat reader LoveMySB! Enjoy the parade's prime seating.

The parade featured a ton of animals, definitely over 600 as promised. But, how many were actual horses and not mules or donkeys? The edhat staff counted 611 horses in this year's parade. An all-time high! There were very few donkeys or mules whereas past parades there seemed to be much more.

Congratulations to edhat reader Lyle Davis who guessed the exact number, 611! Enjoy your passes to the Santa Barbara Museum of Natural History!

Below is the total numbers and history of edhat's counting contests. 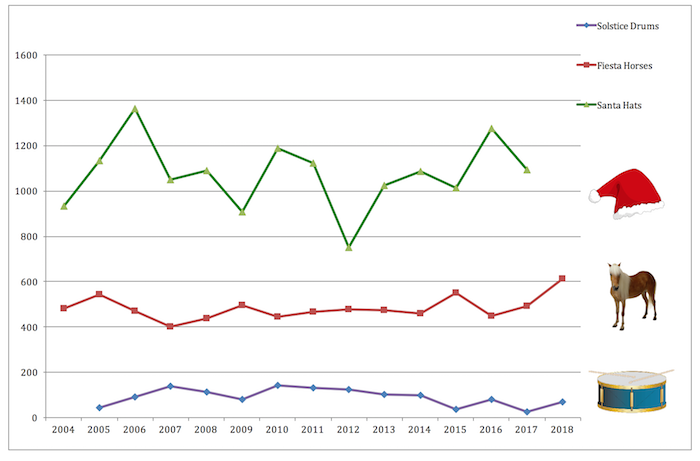 We have two Fiesta contests to announce, that's right two! It's important to read the entire text below as some hints may be included.

This year marks the 94th anniversary of the Fiesta Historical Parade. There will be floats depicting episodes from the history of the California and Santa Barbara. Descendants of local Native Americans, Spanish Pioneers, the Native Sons and Daughters of the Golden West, and local service clubs and organizations all reenact historical scenes. It is one of the nation’s largest equestrian parades that also features many antique carriages, coaches, and wagons.

As we all know, guaranteeing space to watch this popular parade can be a hassle. Edhat has 2 VIP seats and a parking pass that we're passing along to one lucky reader! The seats are located in "Broadcast Corner" at Cabrillo Blvd and State Street. You'll be chilling in covered grandstand seating with refreshing beverages across from the ocean watching the parade in style and relaxation.

How do you win? Enter the correct year when the historical Fiesta parade first began in Santa Barbara. Entry must be received by Thursday, August 2nd at 5:00 p.m. Of the correct entries, a winner will be chosen at random and contacted Thursday evening.

It's our annual horse counting parade! We do it every year, and every year the numbers change. Our edhat staffer will watch the parade in close detail and count how many horses took place in the parade. Keep in mind, we only count horses. Not mules, donkeys, or bulls. Yes, there's sometimes a man riding a bull, it's fun.

What's the prize? Great question! We'll be giving away a family 6-pack of passes that can be used at the Santa Barbara Museum of Natural History or the Sea Center on Stearns Wharf.

The entry date is the same as above. Submit your guess of how many horses will be in this year's parade by Thursday, August 2nd at 5:00 p.m. A winner will be contacted on Friday, August 3rd after the parade has concluded.

Be sure you leave off the