With the Whittier Fire increasingly coming under control, I was surfing the web for more info and came across some stuff about wildfire trends. Relatives had just started out on a Yosemite trip, but the monster fire changed their plans.  That got me wondering what "fire season" is.  I found the government NIFC Predictive Services chart named "Likely Areas of Fire Activity By Month" (aka "Monthly Density") very surprising.  The only month from 1990 to 2010 without many wildfire ignitions in California is February, and the most active season in our region was from May through October. 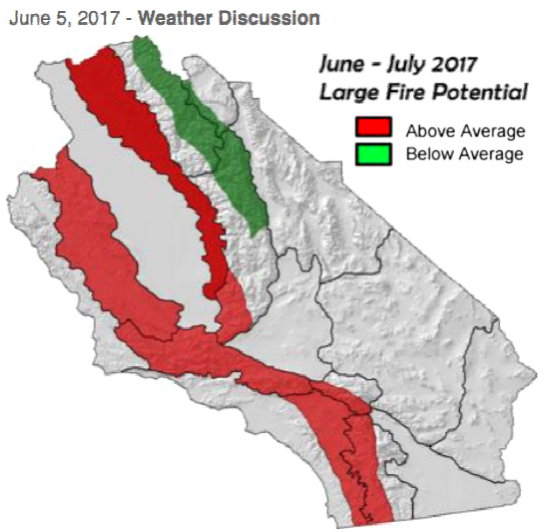 Then I wondered if there's a forecast for fire activity this year, and found a June 5, 2017 "June-July Large Fire Potential" map for SoCal that shows "above average" risk in our area.  A larger version of that map shows the potential for lots of smoke coming our way on the prevailing winds from the North.  Sadly, that prediction has already been proven accurate.  But at least on the latest weekly forecast I found, our local risk is now shown as "low" through the 25th. 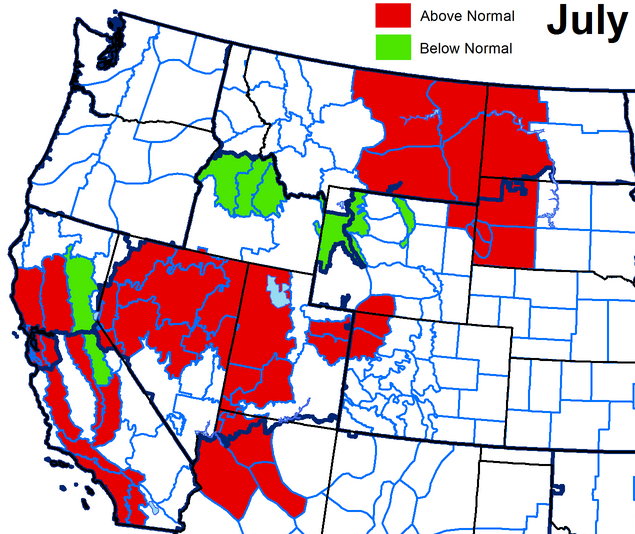 I found a "Proceedings National Academy Sciences" (PNAS) article about how human-started wildfires have increased in recent years.  Here's an excerpt:
"Human ignitions dramatically expanded the wildfire season in the United States, particularly during spring. The length of the human- started wildfire season was more than triple that of the lightning wildfire season, with later (late summer or fall) human-started fires in western ecoregions. The most common day for human-started fires by far was July 4th, with 7,762 fires starting that day over the period 1992 to 2012, whereas, the most common day for lightning-started fires was July 22nd. Of all lightning-ignited fires, 78% occurred in the summer (June– August), 9% in the spring (March–May), and 12% in the fall (September–November). In contrast, human-ignited wildfires were more evenly distributed throughout the year, with 24% in summer, 38% in spring, 19% in fall, and 19% in winter." 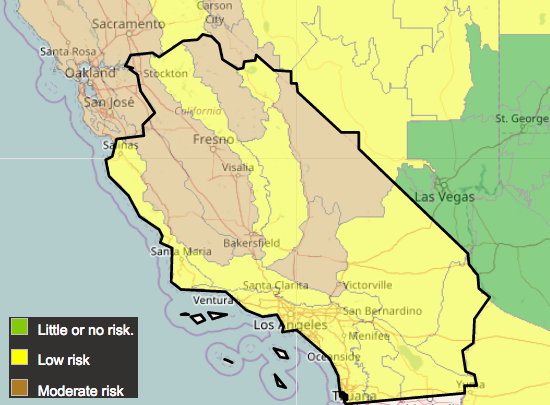 The article's nationwide "Human Ignitions" chart seems to show California uniquely affected among Western states.  Their national chart comparing human vs. lightning ignitions gives perspective on how big a problem Independence Day is for firefighters.  I also inset their California chart in the image. 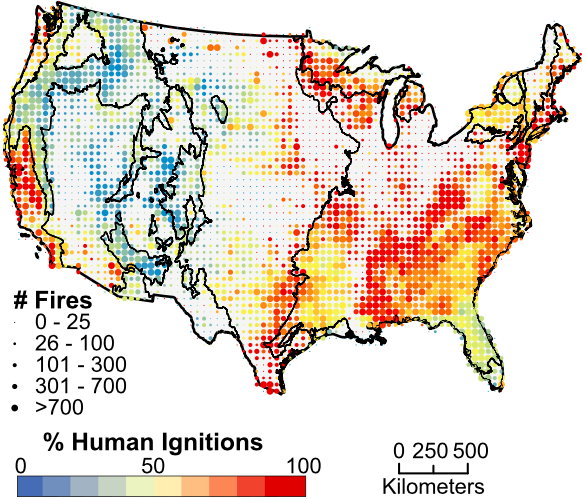 Do you find that fire season has affected your own travel plans?  Would you like to see something done differently to help address this issue? 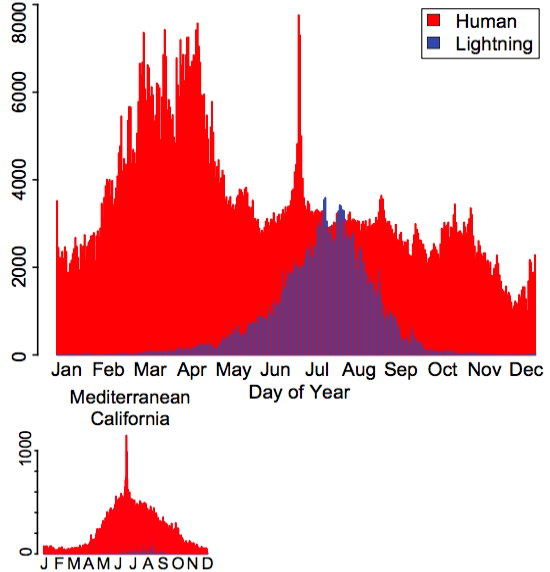 On SBitZ.NET I've posted some clickable links for more details. I haven't yet figured out how to add clickable links here on the new Edhat. I notice that the helicopters have been very active at the Salvar Bridge today, and hopefully that means they're knocking down the last of the "smokers" inside the fire perimeter.

Thanks, John, useful and interesting.

Thanks John, I had no idea there were so many human-started fires. It's also interesting to fires are not as random as it may seem, that there are specific historical trends. This must be helpful for those planning where resources will likely be needed over time. Lots of valuable resources you have given. :)

Thanks, John. There was a time, 50 or more years ago, when Forest Service firefighters got paid overtime so they would keep the fires going as long as possible. I learned that from a couple of Forest Service personal.

John, I appreciate your work!

There have been headlines for several years now stating that CA fire season is now year-round.

Literally the opposite, they

I've been unsupportive of the

Indy did a write up on it:

And how does "vacation" equal

Yup. I won't be attending any

Thanks for reminding me of

The new property owners will