Get up-close-and-personal with an endangered California condor chick on a live-streaming nest cam direct from the remote mountains near Hopper Mountain National Wildlife Refuge.

That's about 30 miles, as the condor flies, from the Santa Barbara Zoo, which is collaborating with the U.S. Fish & Wildlife Service and Cornell Lab of Ornithology to bring this real-time video feed to the public. 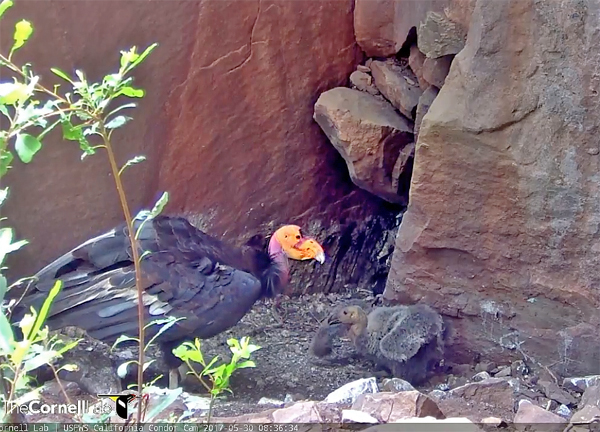 The pair raising California condor chick #871 is eight-year-old female condor #513 and 18-year-old male condor #206. The pair used this same nest site in 2015 and this is their third attempt at nesting together. This is their first year to be featured on the livestreaming nest camera. The nest has been nicknamed "Devils Gate Nest" for the rugged area where it is located.

“Webcam viewers will see the rich social interactions of these intelligent birds, such as the two adults sharing parental duties, and their interactions with each other and the chick,” said Dr. Estelle Sandhaus,  the Zoo's director of conservation and research.  “Condor chicks actually engage in ‘play,’ by pouncing on and grabbing feathers and sticks, for instance. It’s a thrill to watch the chick grow, learn, and play under the watchful eyes of its dedicated parents.”

“Nest cameras like this one were first used as a management tool to help biologists monitor the nests for problems, like lead poising and micro trash ingestion, so that we could intervene on behalf of the chicks if needed,” said Joseph Brandt, supervisory wildlife biologist with the U.S. Fish and Wildlife Service’s (USFWS) Hopper Mountain NWR. "The livestreaming nest camera allows people from around the world to personally connect with these magnificent and endangered birds, and learn what is needed to save them.”

In 1982 there were only 22 of these awe-inspiring birds with massive 9.5 foot wingspans left on the planet. Now there are more than 400, with more than half flying free and nesting in the wild!

But California condors are still endangered, and every chick is vitally important to the survival of the species.