“It appears that Jari’s head became tangled in a net that was in the exhibit for enrichment, and she was not breathing when her keeper got to her,” said Dr. Julie Barnes, Vice President of Animal
Care & Health. “This happened shortly after Jari went out on exhibit this morning. I was on the scene within minutes of her being found by her keeper. We rushed Jari to the Animal Hospital and attempted to revive her, but we were unsuccessful.”

This kind of net is common enrichment for primates who climb, like gibbons, and had been in the Zoo’s exhibit for several months. Similar netting, called “cargo nets,” are also used in human play
structures. 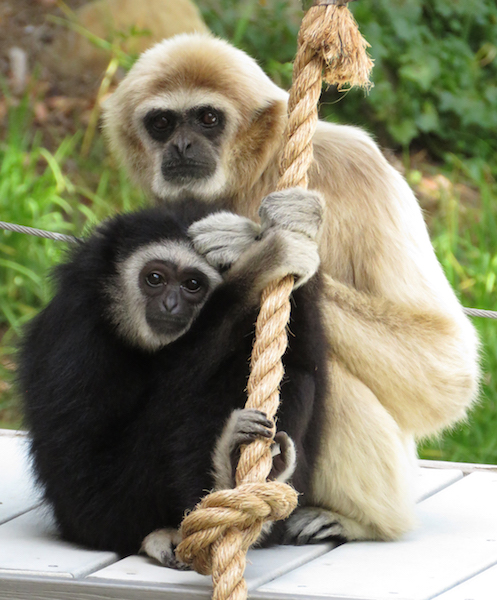 “We assess the potential safety risks of everything we put in our animals’ exhibits, but there was no way to anticipate this,” adds Dr. Barnes. “It appears to have been a very unfortunate accident. We will investigate this tragedy and send reports to the U.S. Department of Agriculture, which oversees licensed exhibitors that hold animals, and to the Association of Zoos &amp; Aquariums’ Accreditation Commission.”

Jari, who had dark fur, was born in November 2013, at the Jackson Zoo in Mississippi. Abandoned by her mother, she was hand-raised by keepers. In October 2014, Jari went to live with an elderly female named Kimmy at the Henson Robison Zoo in Springfield, Illinois. After Kimmy passed away in January 2017, Jari was paired with the Santa Barbara Zoo’s elderly female Jasmine, who lost her longtime mate in July 2016.

“The two got along immediately and Jari has been an absolute joy for both our staff and visitors,” added Dr. Barnes. “As you can imagine, her keepers and the entire Zoo family are incredibly upset. She was an amazing young gibbon who was doing so well being fostered by Jasmine.”

White-handed gibbons stay with their mothers for five to six years, and depend on them to learn how to vocalize, groom, play, and be independent. Jari’s moves were recommended as part of a Species Survival Plan of the Association of Zoos and Aquariums (AZA) which has an ape surrogacy program for youngsters like Jari who need a mother figure. After reviewing the database of white- handed gibbons in AZA-accredited zoos, the program coordinator identified companions to help further Jari’s gibbon “education.”

“Jasmine, who is 41 years old, remains at the Zoo and we will be talking to the AZA in coming days about finding a suitable companion for her. But for now we are mourning Jari.” said Dr. Barnes.

WHAT KIND OF PERSON would downvote a comment that merely says "Oh, how sad."? There must be some real animal haters in our community. Sad indeed. The lowest of the low is a person who hates animals. We are all animals. Some might argue that the four-legged variety are smarter than those of us who walk upright.

I have tried to justify zoos in that they provide exposure of humans to animals that they'd otherwise not encounter, in hopes that they'd subsequently respect and protect the free members of those animal families on a global scale. But with death after death after death at this zoo, I can no longer defend the imprisonment of these helpless creatures. Perhaps it's time to use these enclosures to only support disabled animals that could not survive in their native habitats.

I'm wondering what the tenor of the comments would be if the animal that died was a dog. Fewer jokes, I bet. Even those who felt like making jokes would hold back, knowing how a joke would be judged. This little guy's death makes me sad.

Thank you. It also makes me sad. “He who is cruel to animals becomes hard also in his dealings with men. We can judge the heart of a man by his treatment of animals.” ― Emmanuel Kant. Cruelty in word is only a step away from callousness and cruelty. Unfortunately, we have not moved far in the more than 150 years since Lincoln said, “I am in favor of animal rights as well as human rights. That is the way of a whole human being.”

Who assessed the risk of the enrichment net ( death net) a monkey?

Why do we have to have caged animals for the enjoyment of humans?

AMEN to that! Save habitat, don't incarcerate innocent animals! Habitat is the real issue around the globe. Too many humans, not enough habitat. We are destroying everything.

I used to feel the same way (hated zoos), but since many animals are on the verge of extinction in the wild due to human encroachment, illegal hunting, etc, zoos are helping to restore populations through careful breeding programs. Zoos also help educate those who will never get a chance to see these animals in the wild and, hopefully, will gain an understanding of why it is so important to protect them. My thoughts go out to the keepers for their loss.

have you ever watch congress?

It would seem in about 10 years the zoo will only have some turtles. They won’t replace the lions, snow leopards, elephants, primates and realistically it’s is a pretty sad sight to see these critters penned up and stir crazy. Times have changed and zoos are out of date. Downvote me if you like.

There's a really good argument that the local zoo should concentrate on local animals, those injured that can not survive in the wild and yet would be adaptable to a zoo -- and on the condor exhibit, hopefully helping in the preserving and re-introduction. It would not be so glamorous for people, but the land is essentially free (rented at nominal price from the City, I believe - please correct me if I am wrong.) Oh, my, indeed, about lions and tigers and elephants in such a small space ...and even a gibbon, except to provide company for the unfortunate Jasmine now left again alone. With virtual reality technology, children now can become knowledgeable about other animals, even as, most Great Apes and elephants and even giraffes, plus many, many others are sliding towards extinction. Three cheers for turtles who also deserve respect and a healthy habitat!

Way cool. Thank you for the

Well done as always TMO! I

This is exactly the type of