In the vegan food world, word travels fast. I heard of Wandering Pie a few months ago before I even knew who they were. Instagram was my insight to vegan food that wasn’t available to me in Santa Barbara.

Historically (in my humble opinion), pizza is one of the more challenging foods to recreate without animal products. I can do without meat, but melty, creamy, nutty, stretchy plant-based cheese is hard to find. Enter: Wandering Pie Pizza. Based in Oxnard, Wandering Pie Pizza is a pizza pop-up, traveling throughout Ventura and Santa Barbara County. 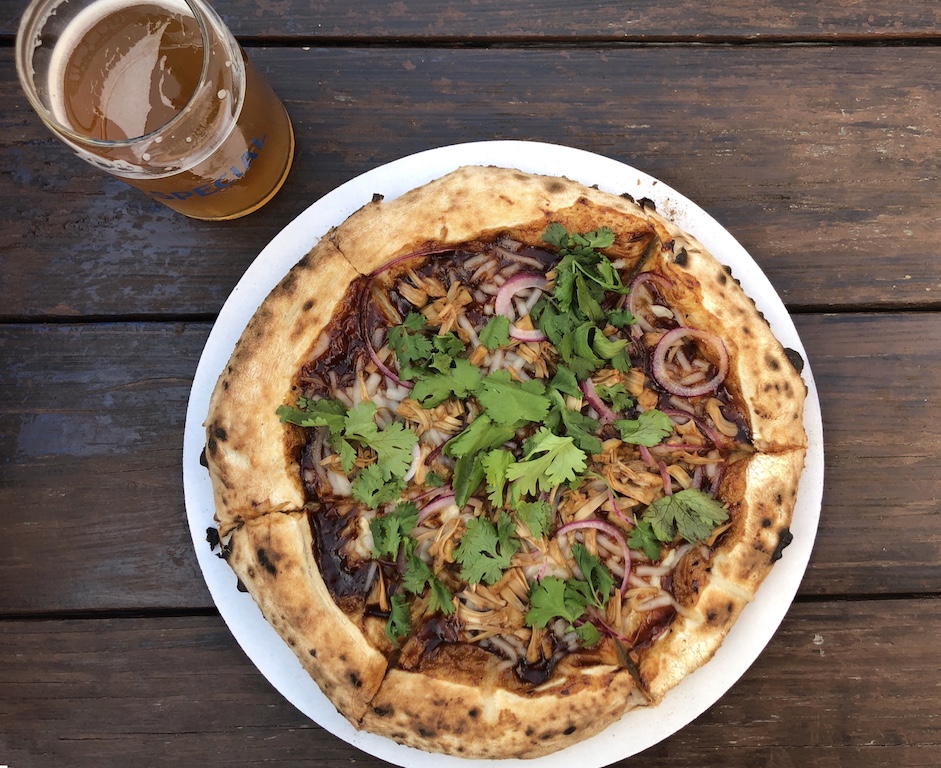 On Saturday, M. Special celebrated their 3rd Anniversary, which brings us to today’s food adventure. The celebration was filled with live music, delicious craft lemonade by Los Olivos Lemons, who provided flavorful and fun cold beverages for the sober crowd (me & mostly children, I think --- also, shout out to Grant!) and Disfruta, a food truck that sells Mexican food and one of my favorite spicy, fruity treats, mangoneada. 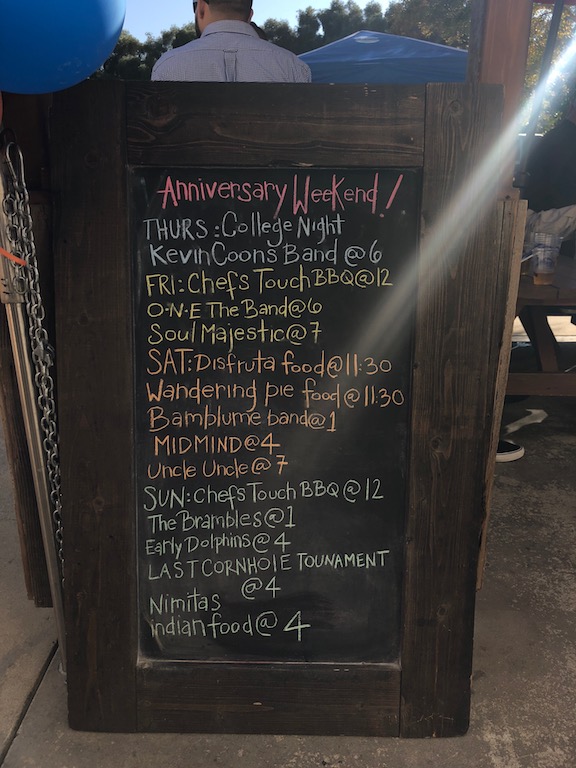 When I arrived at M. Special, the band was jamming and the inside and patio were packed out. After making my way through the crowd, I arrived at Wandering Pie. They had a seven-item menu -- four of the pies are able to be made vegan: The Margherita, The Vanna (a personal favorite), the Fifth Street Sausage, and BBQ Jack. In the past, I have also seen two dessert pizza options, with flavors that include blueberry and hazelnut.

I had the privilege of speaking with Jamie of Wandering Pie at their pop-up location on Saturday. He explained their dedication to procuring local, seasonal ingredients and going fully top-shelf for their vegan menu items, which is admirable in the eyes of a self-identified plant-based eater like myself. The crew is majority vegan but serves carnivores, omnivores, and herbivores alike. Currently, Wandering Pie is completely mobile, and according to Jamie, they plan on staying that way for some time. I personally love it, because pizza comes to me and I don’t need to travel. It also gives the business owners the flexibility to go to their target demographics. 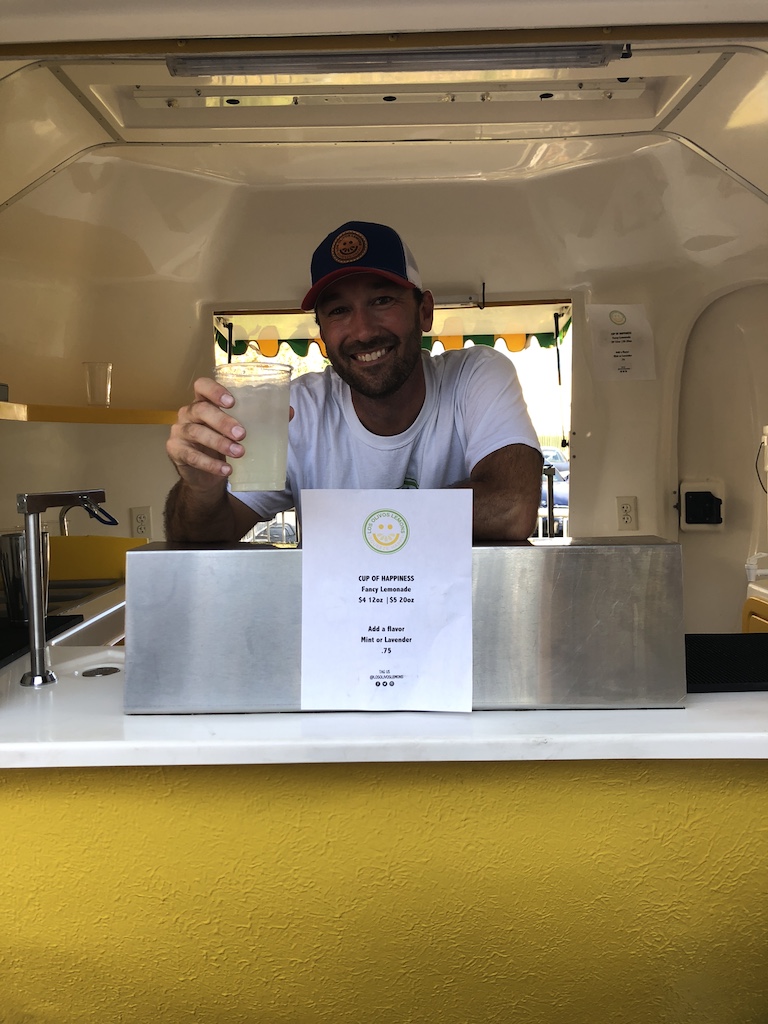 I blessed my palate with The Vanna and the BBQ Jackfruit. Each pizza is made to order, so the wait can be 10-15 minutes, which is on par with many traditional (non-pop-up) pizza places. The Vanna is unlike any pizza I’ve ever had before. It’s sweet, but not in a sugary way. It is topped with lemon zest, which gives the pie a unique citrus flavor that allows the sweet and acidic flavors to coexist in a way I didn’t think I would like but realized I loved. The rosemary also adds herbal complexity and slight bitterness.

I do not like garlic, but somehow feel like this pie would be incomplete without it. In truth, the harsh garlic flavor that causes me to run is not overbearing, it simply compliments the pizza in a way that works -- doesn’t blend in, but doesn’t stand out. It’s just right. The crust reminds me of making homemade flour tortillas with my grandmother as a child. It’s comforting. 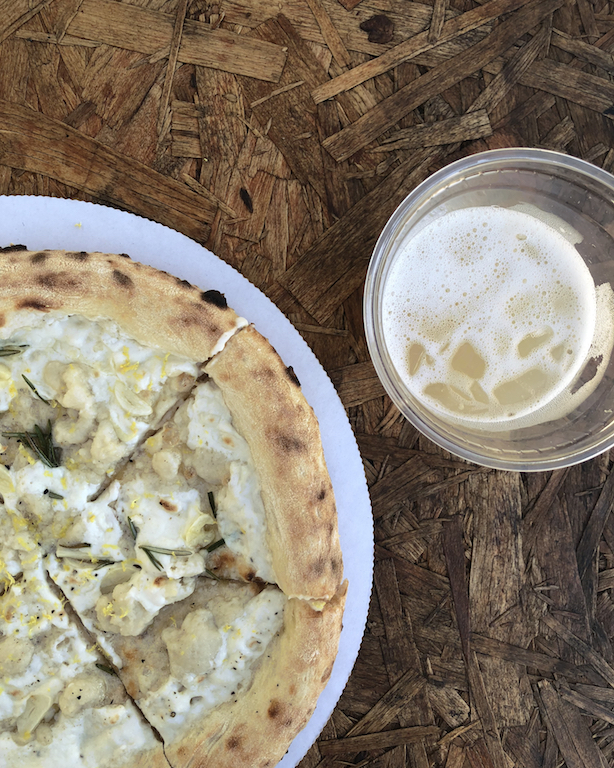 As for the BBQ Jack: if you are not vegan or vegetarian, please do not write off trying the veggie version. Jackfruit is an incredibly versatile ingredient. I am weary of trying jackfruit as a meat substitute because there are so many ways it can go terribly, horribly wrong. On the BBQ Jack, it is so totally right. The jackfruit is tender and flavorful, not dry in the slightest. It’s tangy with a great mouthfeel. The BBQ sauce is sweet and tangy without the thickness of a typical store-bought sauce. The cilantro adds another dimension, I would recommend keeping it (unless you are one of the folks who taste soap instead, then omit). As one who does not like red onions due to the aggressiveness and inability to ever get the scent out of my mouth and hands, I happily eat it when it is on the BBQ Jack.

Last but not least, it would be remiss of me to not mention the cheese on these pies. As I mentioned before, cheese is notoriously difficult to replicate without casein. The vegan cheese on these pies currently alternates between Parmela Creamery and Myikos, depending on availability.

Overall, I would rate Wandering Pie 9/10. The pizza is creative and flavorful, the owners are among some of the kindest people I’ve met, and the prices are reasonable for a fresh personal pizza with artisan and locally sourced ingredients ($11-$15 per pie). If Wandering Pie Pizza comes back to M. Special (or any place in Santa Barbara County), you can count me in. I literally put their pop-up dates in my calendar and set a reminder. You should too, you don’t want to miss this.

Alyssa Rendon is a writer for edhat and local vegan. You can follow her vegan food adventures in Santa Barbara, and surrounding counties, on Instagram @plantbasedsb.

You can also follow M. Special @mspecialbrewco on Instagram or visit their taproom from Sunday-Thursday 11:30 am - 9 pm and Friday-Saturday from 11:30 am- 10 pm. You can follow The Wandering Pie on Instagram @wanderingpiepizza for pop-up dates or book them for your event at facebook.com/wanderingpiepizza. Also follow @losolivoslemons on Instagram and visit them from Thursday - Sunday 12 pm - 5 pm in downtown Los Olivos.

Toggle Comments (Show)
Wandering Pie Serves Vegan Specialties
In ten years when Global Warming has destroyed our current agricultural system that affords the luxuries of veganism, we will be fighting in the street for a Soylent Green pizza.
Please Login or Register to comment on this.

Aren't you the lucky one.