The Santa Barbara Police Department has identified the driver of the fatal traffic collision that occurred on December 11, 2021, as 27-year-old Santa Barbara resident, Luis A. Najera.
The cause of this collision is still under investigation.

On December 11, 2021, just after midnight, the Santa Barbara Police Combined Communication Center received a report of a serious traffic collision involving a single vehicle that collided with a large palm tree in the 700 block of Shoreline Drive. Multiple Officers, Harbor Patrol Officers, Fire Department personnel, and AMR Paramedics responded to the scene.

Approximately three hours after the collision, the 27-year-old male driver died, succumbing to his injuries sustained during the accident.

The Critical Accident Reconstruction Team responded to the scene to investigate this fatal collision further. The exact cause of the collision is unknown at this time. It is not known if alcohol or drugs played any role.

The name of the deceased male driver is being withheld pending notification of family. There is no other information available for release currently. 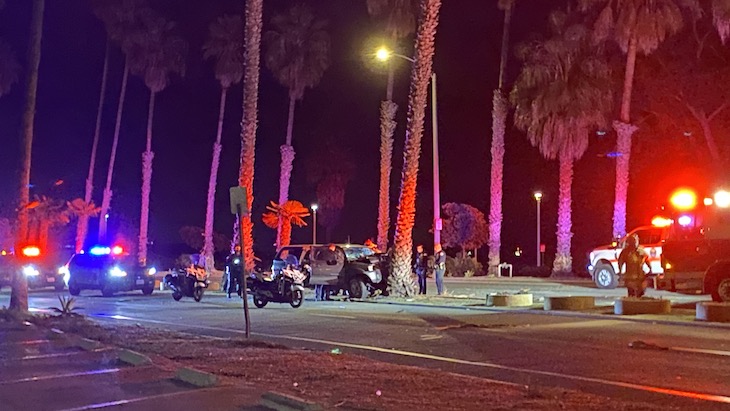 Were you there, and do you know what happened? Pure speculation on your part, which is not exactly salve for the grieving. I'm so sorry for the loved ones of this young person.

Hey Seabird- "The truck didn't run into the tree" as reported, the DRIVER drove into the tree... I am just thankful the DRIVER didn't kill another motorist or pedestrian. Yeah- It WAS AVOIDABLE.... last I checked cars and Toyota pickups don't drive themselves into trees... Unfortunately, bad decisions have bad consequences. He paid the ultimate price for personal responsibility- RIP I hope the injured passenger recovers, Unfortunately, she too paid the price for the drivers bad decisions.

He must have been going pretty fast, certainly over the 25 MPH speed limit, to cause that amount of damage.

I don't disagree, but this is just rude. I haven't decided, for myself, how acceptable this public discourse is. Of course I lean toward free speech.

I was there. I was the one who made the call actually. I was sitting in the parking lot parked in a space that was right in front of the palm tree he actually crashed into. There was no screeching noise. I don’t want to say he didn't press on the breaks because I don’t know exactly what happened in that car but I do know the car went straight for the tree. No sound and no sight of actual tire marks on the ground. We ended up opening the door to let out air since there was a lot of smoke in the car (assuming from the airbags) and saw the driver wasn’t wearing his seatbelt and was completely unconscious. A lot more to this that I would rather not go into details to respect the family but Prayers to them and the friends of both the driver and passenger.

Perhaps avoidable by wearing a seat belt. My condolences to the family, always seems more tragic near the holidays.

Love you forever brother. So stubborn sometimes, no seatbelt? Cmon dude, like a 5 minute drive home! You are such a bright light. Can’t believe you’re gone.

I am so sorry for your loss. I hope you can be there to help his family get through this horrible tragedy.

sorry for your loss

My sincere condolences too, for what it's worth from a stranger. I wish healing to the survivors.

Google Street View suggests that the accident occurred in the median strip on Shoreline Drive heading west bound, about 100 feet before you reach Shoreline Beach Cafe / Loma Alta Drive. The road curves there and the driver went straight instead.

35MPH posted... obvious that was not being followed. No mention of DUI?

35mph into a immovable object will and does cause extreme damage and injury leading to death. The sudden stop tears the internal organs apart.

I am so confused. So, this young man with a passenger in his truck, intentionally drove it in to the tree? Or was it an accident that ended by slamming in to the tree? Either way it is extremely sad.

I don't see what's confusing about simply not knowing the answer yet.

I dont see where it said intentional anywhere.

why does this site thrive on assumptions. especially about things they really would not know anything about unless they were there.

if you clip a curb, and arent holding the wheel. you will be "veered" in directions you dont want. accidents are sometimes........ ACCIDENTS

no skid marks on the pavement... RIP

Regardless of the cause, which we do not know yet, these seemingly senseless accidents are getting truly terrifying. It seems like at least once a week people are killed on 35mph roads around here. I don't really get what is going on.

It isn't our imagination that these accidents are going up. Traffic fatalities in the last year nationwide are up 25% despite road traffic being down 13%. People are apparently losing their ability to drive or their will to drive safely and sanely due to various aspects of living through COVID. I personally have witnessed more insane driving on the road in the last year or so than ever before and I was pretty sure it was not my imagination but was confirmed when I read the stats.

If you have a heart at all, speculation and especially judgement is better kept to yourself when a tragedy like this occurs. This is devastating to his friends and family. Sincere condolences to all who knew him, may he rest in peace.

Anyone who drives around without wearing a seat belt is asking for trouble. And no one just drives into a tree without something being seriously wrong with them.