A Ventura County man was charged [Thursday] in a superseding indictment that alleges he illegally imported into the United States more than 1,700 reptiles – including 60 reptiles found hidden in his clothes last month at the United States-Mexico border.

Jose Manuel Perez, a.k.a. “Julio Rodriguez,” 30, of Oxnard, is charged with one count of conspiracy, nine counts of smuggling goods into the United States and two counts of wildlife trafficking. He is expected to be arraigned on March 28 in United States District Court in Los Angeles.

His sister, Stephany Perez, 25, also of Oxnard, is also charged in the indictment with conspiracy and will be directed to appear for an arraignment in the coming weeks.

The superseding indictment returned today adds allegations to an indictment originally filed on February 24. The new allegations include 14 overt acts in the conspiracy charge, including some accusing Jose Perez of crossing into the U.S. from Mexico by car at the San Ysidro Port of Entry on February 25 with approximately 60 reptiles – including dozens of lizards and four snakes – concealed inside his jacket pockets, pants pockets, groin area, and pant legs. After initially denying to customs officials that he had anything to declare, Perez later told them that “the animals were his pets,” the indictment alleges.

According to the indictment, from January 2016 to February 2022, the Perez siblings and their co-conspirators used social media to buy and to negotiate the terms of the sale and delivery of wildlife in the United States. The defendants allegedly advertised for sale on social media the animals smuggled from Mexico into the United States, posting photos and video that depicted the animals being collected from the wild.

The animals – which included Yucatan box turtles, Mexican box turtles, baby crocodiles and Mexican beaded lizards – allegedly were imported into the United States from Mexico and Hong Kong without obtaining permits required by an international treaty known as the Convention on the International Trade of Endangered Species of Wild Fauna and Flora (CITES).

For the animals allegedly smuggled from Mexico, co-conspirators would retrieve the wildlife from Cuidad Juarez International Airport in Mexico and eventually ship the animals by car to El Paso, Texas. Jose Perez paid his co-conspirators a “crossing fee” for each border crossing – the amount of which depended on the number of animals transported, the size of the package, and the risk of being detected by the authorities. 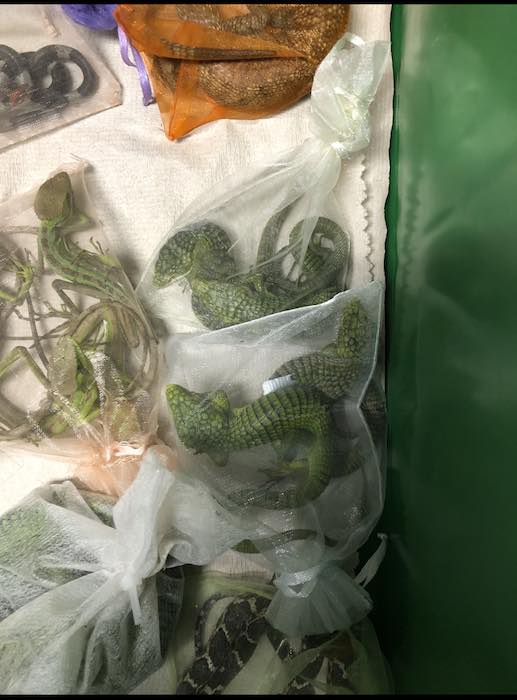 On other occasions, Jose Perez and a co-conspirator traveled to Mexico to purchase additional live animals that had been taken from the wild so that the animals could be smuggled into the United States, according to the indictment.

Once the animals had been shipped to the United States, they allegedly were transported to Perez’s then-residence in Missouri. But after he moved to California, the wildlife was shipped to his residence in Ventura County.

Stephany Perez allegedly assisted in the illegal wildlife smuggling business, particularly during two extended periods when her brother was incarcerated in the United States.

An indictment contains allegations that a defendant has committed a crime. Every defendant is presumed innocent until and unless proven guilty beyond a reasonable doubt.

Who takes over the care of all these poor animals?

Is that a baby croc in your underwear? Too bad they don't have bigger teeth.

Good thing the Mexican Beaded Lizards didn't get riled in transit. Along with the Gila Monster, they are the only known venomous lizards.

Wow, imagine stashing all that on your body - yikes!! That’s frickin’ creepy. Looks like he’s getting serious prison time.

Greed and selfishness is the essence of what is wrong with society. This guy's values are no different than those of Trump or Putin. Get what you can and to hell with anyone else's interests. Good bust.