Firefighters have stopped the forward progress of a brush fire on Vandenberg Air Force Base (VAFB) that grew to 110 acres on Wednesday.

VAFB firefighters supported by Santa Barbara County firefighters responded around 12:40 p.m. off Highway 1 near San Antonio Road. Initial reports stated the fire was around one acre and produced a lot of smoke with visible flames.

Air support was called in to assist with the fire, now called the San Antonio Fire, as it continued to grow on the base. There were no structures threatened but some buildings were evacuated out of an abundance of caution.

Fire officials reported 10% containment of the fire and forward progress had been stopped around 5:00 p.m. Wednesday. It's currently estimated to have burned 110 acres.

More information will be added as soon as it's available. 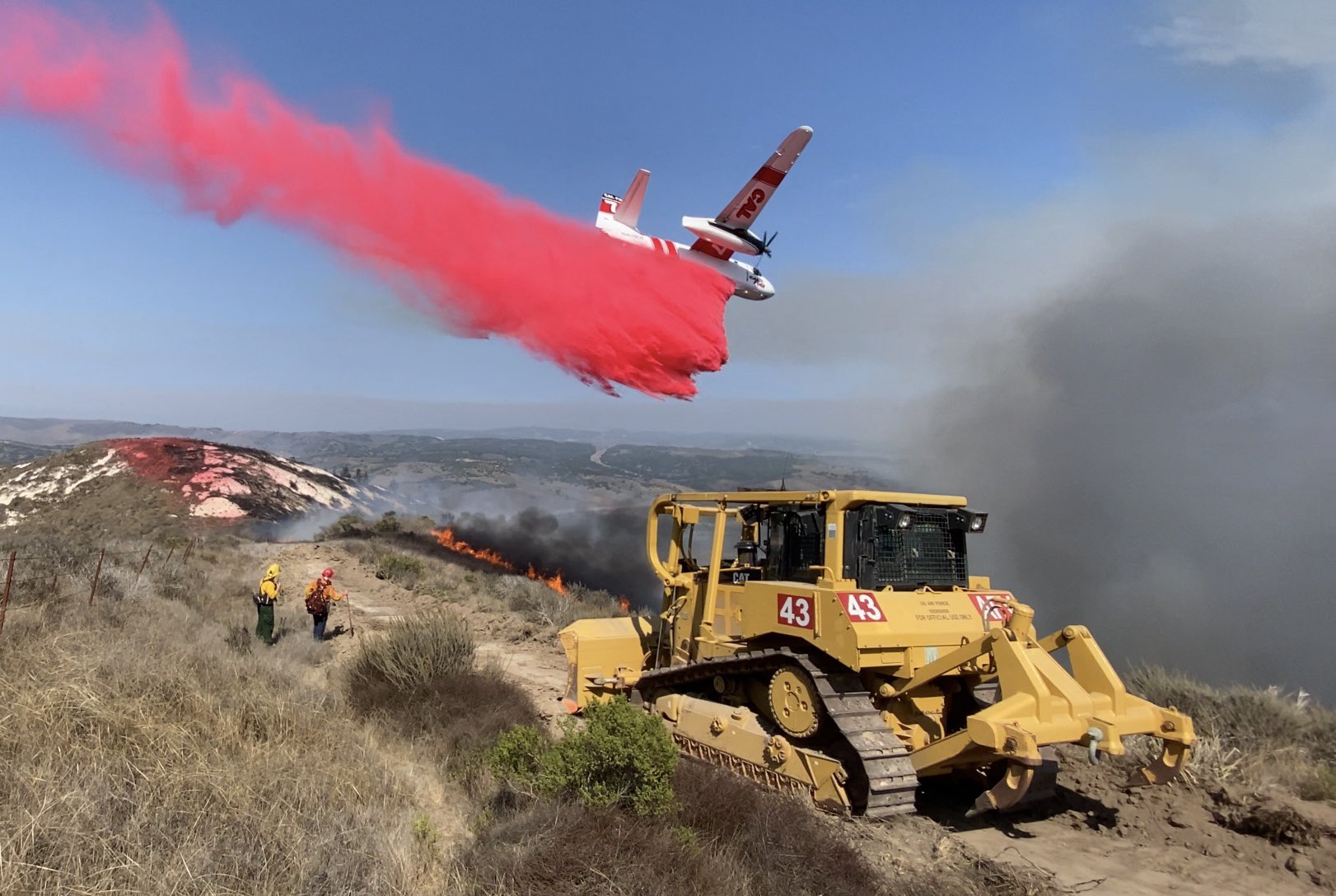 The scanner is reporting another brush fire off Highway 1 at the Vandenberg Air Force Base. The fire is near Highway 1 and Firefighter Road.

A garbage truck is pulled over on the right-hand side of the road with flames nearby. It's unclear if the truck is related to the fire. 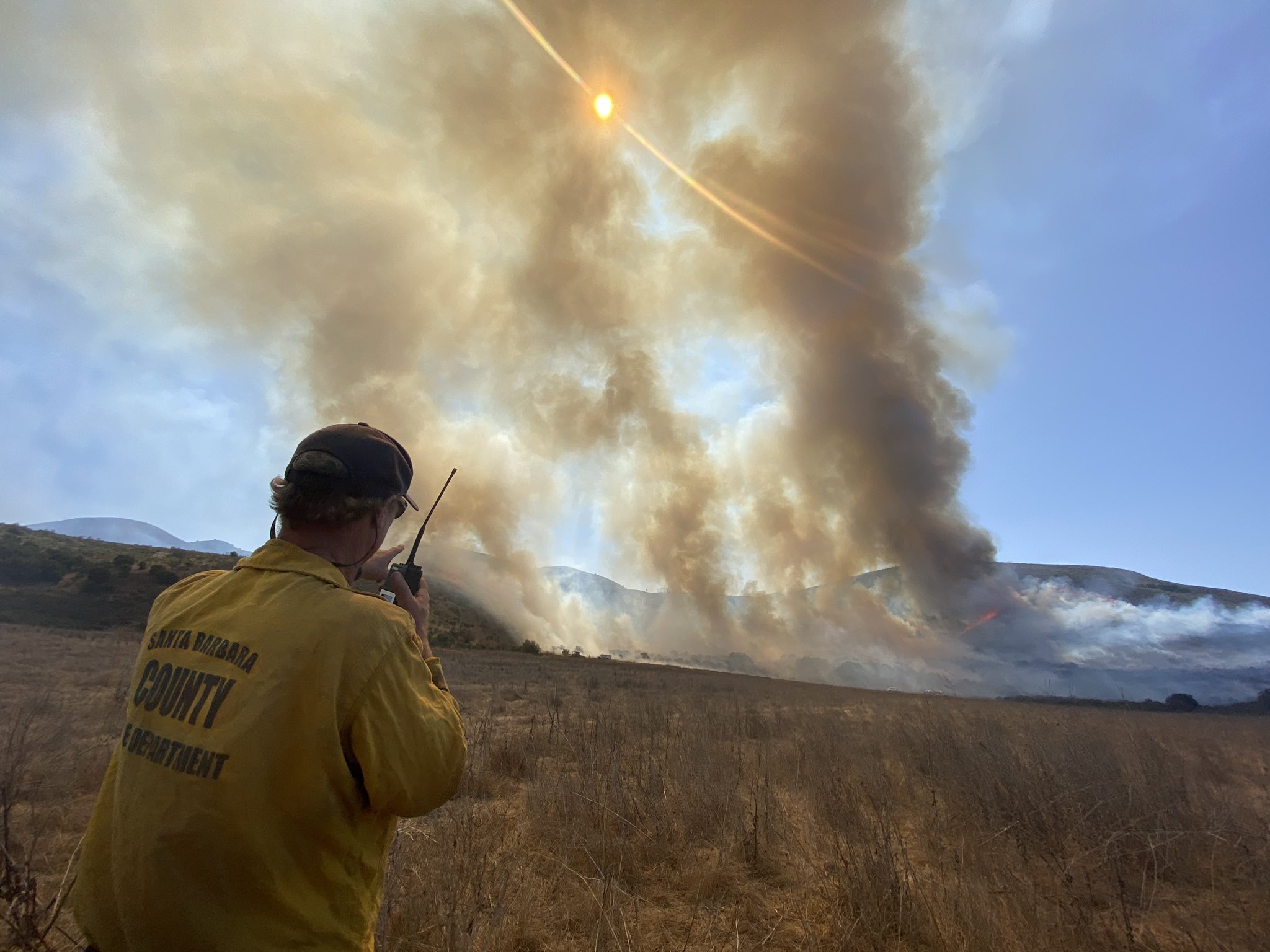 Smelled woody smoke just before 10pm so we closed windows and turned on box fan "air filter," then started looking for sources. Thought maybe it's someone with a fireplace, but then saw fire detections in the VAFB/Lompoc area on two sites. Right now the NOAA site's showing a considerable smoke plume too, if you turn on the stuff below the left column's HRRR category. Guess that fire's still going? Anyone have more info? https://hwp-viz.gsd.esrl.noaa.gov/smoke/

4mi. visibility in haze & smoke at SBA, Lomoc Airport's 200' ceiling 1.5mi. vis. in haze with a gentle breeze from the North. Guess nobody else is noticing this, so I'm back to other stuff. :)

AQI Lompoc uncalibrated sensor on PurpleAir spiked over 150 and is now at 138. Guess the fire's acting up. :(

Air Quality Indicator on the Lompoc calibrated sensor jumped from 54 at 8pm to 71 at 10pm.

Nothing on SBCFD twitter link or their website, but CalFire lists San Antonio Fire as active as of 4pm.

The impressive pictures show a burn that is much larger than 1 acre.

Because two fires have been confused here. The small one with the garbage truck happened yesterday. The larger one happened today.

No structures threatening, expecting to hold the fire around 1 acre.

Highway 1 is shutting down in the area.

UPDATE from SBCounty Fire: Vandenberg fire on scene of a 1 acre brush fire at Hwy 1 and San Antonio Rd with moderate rate of spread uphill. No structures threatened. County type 3s, crew, dozers, and copter 4 are enroute to assist.

A Batallion Chief and engine are en route from SBCounty. VAFB resources should already be on the scene.

Another source says it's closer to San Antonio Road off Highway 1.

The Hallmark Channel's "Adoption Ever After" segment highlighted an adoptable dog from the Santa Barbara County Humane Society this week.

Movies Way Back When: War Brides

Betsy shares historical feelings about the movie "War Brides" that was made over 100 years ago.

An edhat reader snapped a photo of a dolphin swimming in the Santa Barbara Harbor.

Firefighters responded to an early morning fire in a downtown Santa Barbara apartment on Friday.

November is National Alzheimer’s Disease Awareness Month and National Family Caregivers Month. To mark these events, the Alzheimer’s Association is encouraging people to lend a helping hand to more than 1,624,000 California family members and friends serving as Alzheimer’s caregivers.