As families vowed to rebuild their homes following the horrific Montecito mudslides, many were met with another tragedy: finding themselves under insured. Volunteers, community organizations and donors from around the globe have stepped in to help meet this shortfall, and one of the groups that have its boots in the mud is Habitat for Humanity of Southern Santa Barbara County.

Habitat for Humanity is working directly with families for long-term disaster relief and rapidly moving onto providing much-needed home repairs to the most vulnerable populations. To assist in its efforts, United Way of Santa Barbara County’s Long Term Recovery Committee selected Habitat for Humanity as one of 18 community organizations to receive initial disaster relief funding from the United Way Thomas Fire and Flood Fund, a total of $801,000. 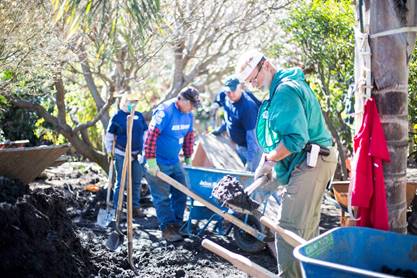 “Thanks to this additional funding, our organization has an expanded capacity to serve families on a long-term basis,” Habitat for Humanity of Southern Santa Barbara County CEO Jon Peterson said of the $50,000 contribution. “The impact of the fire and floods has resulted in much loss, but we feel fortunate to still be able to address the needs of those most affected.”

Marco Farrell and his parents, Jeff and Gabrielle Farrell, are just one of the families whom Habitat for Humanity is serving. Realizing that the Farrell’s insurance would not cover all the damages brought on by the storm, and upon learning that Jeff Farrell served in the U.S. Navy during the Vietnam War, the organization was motivated to start rebuilding the family’s home, brick by brick.

“They were incredible, from day one,” Marco said, adding that his family was surprised that Habitat for Humanity had chosen to help them. “They ended up saving a lot of our valuables. It’s given us hope and internal strength to know that all these people were coming to help and volunteer their own time.”

Marco recalled waking up at 4 a.m. Jan. 9 to torrential rain pounding down on the Montecito home he had grown up in. Seeing the glow of the Thomas Fire through his window, Marco decided to go outside to see if the fire was heading in their direction. But when he went out, he heard the sound of rushing flood waters flowing through their neighborhood.

“I heard this horrendous noise and knew what it was,” Marco said. “I started running yelling, ‘Flash flood, flash flood!’ I ended up running home and telling my mom to wake up my dad. The mud hit the house and broke open the kitchen door and instantly, we had knee-high mud.”

“I did have about five or six seconds of extreme fear, but I kicked into survival mode and knew I had to save my parents,” he recalled. “I just focused on surviving by the second.”

The family waited in the mud for an hour and a half until a firetruck from Santa Maria came to rescue them and their three-legged dog, Lucas.

“The destruction from the Thomas Fire and ensuing flooding is nothing short of staggering, bringing very real consequences for our entire community,” United Way of Santa Barbara County President and CEO Steve Ortiz said. “But throughout the aftermath, we’ve seen amazing people and organizations step forward to help neighbors return to a state of normalcy. We’re proud to support Habitat for Humanity’s work and thank everyone who has contributed to the United Way Thomas Fire and Flood Fund.”

The United Way Thomas Fire and Flood Fund has grown to more than $4.4 million, and the next round of Santa Barbara County disbursements is focusing on individuals and families directly. The phase two distribution is being carried out in partnership with organizations who provide case management for the individuals impacted by the disasters. Every dollar contributed to the United Way Thomas Fire and Flood Fund will be used to fund services that address the needs of the individuals and families affected by the disasters.

For more information about recipient agencies, as well as application materials for individual and family assistance, please visit www.unitedwaysb.org/thomas-recovery.

I've been out digging mud a few times with Habitat for Humanity. Property owners are always so grateful for our help ; it's a nice way for us to say "We care about you." HH is a terrific organization. I'm glad they can help this family.