Students at UC Santa Barbara joined the global climate strike movement on Friday with a poignant protest outside the school's library.

At UCSB, the Global Day of Action event was organized by a local chapter of the Sunrise Movement, a global group that began in 2017 to encourage young people to advocate for their own future and make climate change a priority.

Over 1.4 million students skipped school around the world on March 15 to strike for climate action. Demonstrations were held from Australia to India, the United Kingdom to Argentina, and in our hometown. It's estimated that 2,233 cities in 128 countries held protests.

As demonstrators dressed in black and lied on the ground, the illustrative "die-in" lasted 11 minutes which is symbolic of the estimated 11 years left to curb climate change. The group also remembered those who lost their lives due to climate change-related disasters, specifically those in our own community related to the Thomas Fire and 1/9 Debris Flow in Montecito. 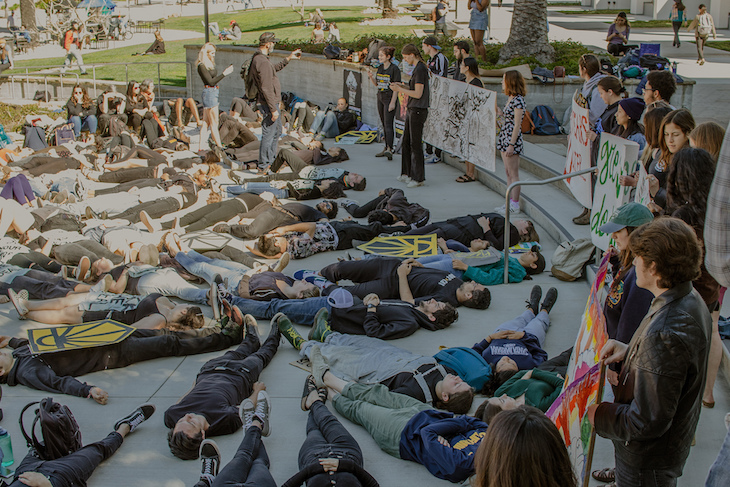 A group of speakers also discussed their encounters with local and national environmental disasters. Mikala, from Paradise, CA, spoke of her experience being at school in Santa Barbara while the Camp Fire destroyed her hometown without having a way to know if her family survived.

The Camp Fire was the deadliest and most destructive wildfire in California history to date, claiming 85 lives. Scientists state disasters like the Camp Fire will happen again due to climate change, and research backs up their findings, proving that climate change makes California's wildfires much worse.

"My peers and I know how hard it can be to stay positive about the future of our world. But we know it doesn't have to be this way and we're willing to fight for it," said student and photographer Reena Nanavati.

The Santa Barbara County Board of Supervisors were called upon by protestors to support the Green New Deal, a new legislative proposal aimed to address climate change and economic inequality, and to halt any investments in fossil fuels.

This global movement was prompted by Greta Thunberg, a 16-year-old Swedish student, who created a solo protest last year advocating for climate change solutions. Three Norwegian lawmakers have nominated Thunberg for the 2019 Nobel Peace Prize for her environmentalism work.

"We proved that it does matter what you do and that no one is too small to make a difference," said Thunberg of the strikes. 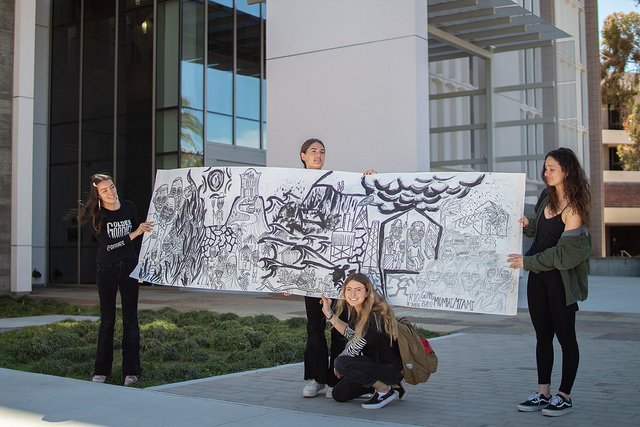 Students hold up a banner made from the protest where environmental disasters are depicted within the banner (Photo: Reena Nanavati)
Login to add Comments