UCSB Graduate Honored as Veteran of the Year

SACRAMENTO — Assemblymember Monique Limón (D-Santa Barbara) has honored Afghanistan veteran and University of California, Santa Barbara student Max Peck as the 2017 Veteran of the Year for the 37th Assembly District. 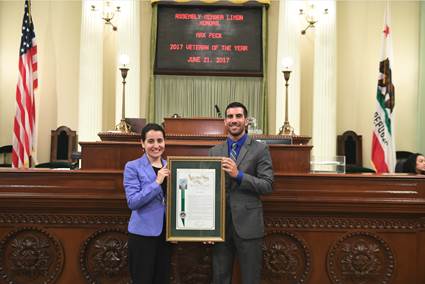 “Max braved improvised explosive devices and enemy fire to provide security for the Afghan people living under the terror of the Taliban, then came back home with a mission to improve the lives of student veterans,” Limón said. “Now, Max is an active leader in the student veteran community and serves on Student Veteran Organizations.”

Peck enlisted in the United States Marine Corps in 2010. He volunteered to join a specialized antiterrorism unit that deployed around the globe to ensure the security of American diplomats. Max then transitioned to an infantry unit, 3rd Battalion 1st Marines in Camp Pendleton, CA. In 2010 he deployed to Helmand Province Afghanistan. Peck received a Navy and Marine Corps Achievement Medal for his exemplary performance during combat operations and was meritoriously promoted to a leadership role as a non-commissioned officer.

A recent graduate of UCSB, Peck will become the interim director of the UCSB Student Veterans Resource Center.

During the annual Veteran of the Year celebration, Veterans from throughout the state – regardless of when and where they served - are honored by their Assemblymember in Sacramento. This year’s ceremony occurred on June 21, 2017.

This is a step in the right

I disagree and didn't care

Motorcyclist Down on Refugio Road

It's easy to believe..

How are things at Initech