Two new restaurants, "SALTY at the Beach" and "CHOMP on the Rocks," plan to open soon at the Santa Barbara Harbor.

Restaurateur Aaron Petersen plans to launch the new restaurant and bar establishments within the next month. He currently owns and operates three Solvang-based eateries CHOMP | Burgers, Fries, Shakes; brekkies by CHOMP; and The Coffee House by CHOMP. Petersen opened the three CHOMP family Solvang businesses between 2013 and 2019 and is also co-owner with his siblings of Solvang’s Mortensen’s Danish Bakery, which celebrates its 45th anniversary next year.

The two eateries are taking over the former homes of Chuck's Waterfront Grill and Endless Summer Bar & Cafe that closed in April. The restaurants are located in the Waterfront Center Building, the former historic Naval Reserve Armory building, which is also home to the Santa Barbara Maritime Museum.

“The history of this building definitely won me over, with its ties to Santa Barbara’s place in naval history,” said Petersen. 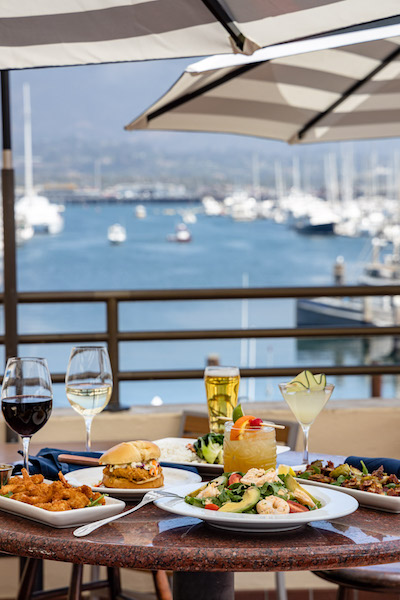 Drink and dining options at SALTY at the Beach (Photo: Matt Dayka)

SALTY at the Beach will be located on the second floor with waterfront views able to host 100 guests on two outdoor patios with seven flat-screen TVs. The owner plans for an "upscale beach setting" focused on California-style tavern cuisine with an award-winning wine list, and cocktails to include the previous-fan-favorite “Endless Summer Mai Tai”.

SALTY at the Beach is also retaining some of the Endless Summer Bar Café staff. It's expected to open later this month.

CHOMP on the Rocks will have alfresco seating for another 50 guests on its lower-level, harbor-front patio designed in a retro-inspired, modern take on a diner with black and white tiles, red leather booths and stool-tops, and additional seating at the shiny aluminum counter. 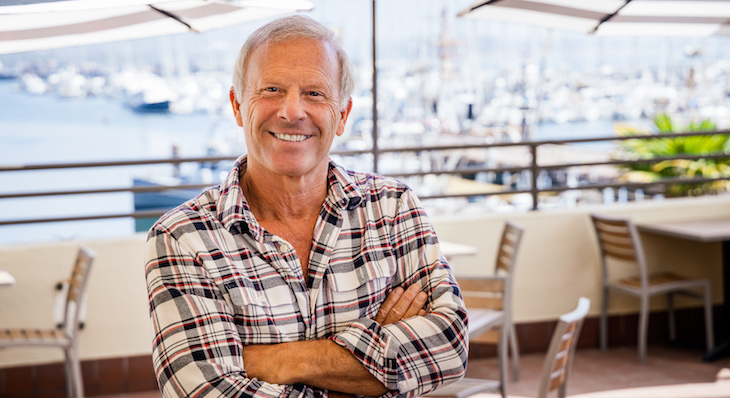 Petersen is joined in the new ventures by Solvang residents Max and Laura Hanberg, who own the 55-year old Solvang Shoe Store, as well as long-time Santa Ynez Valley residents Ken and Ronna Sorenson, owners of 31-year old business Sorenson & Associates. Also joining the team is Southern California native Scott Gold, with a decades-long career in the hospitality industry, and Gold’s family, as well as Petersen’s daughter and son-in-law, both Navy Lieutenants stationed in San Diego.

The restaurants state all COVID-19 safety and sanitation measures will be in place upon opening, and indoor dining will resume once allowed as per Santa Barbara County guidelines.

SALTY at the Beach and CHOMP on the Rocks are located at 113 Harbor Way in Santa Barbara. Both establishments’ initial opening hours will be Sunday through Thursday, 11:30 AM to 9:00 PM; Friday and Saturday, 11:30 AM to 10:00 PM.

As much as I acknowledge that Endless Summer was a local's spot, it could be pretty gross and filled with drunks and sticky tables.. Hoping this new upgrade will class the place up a bit.

Way too many restaurants at the Harbor as it is.

They will definitely bring a new flair to the harbor, but the harbor regulars (often the drunks) will probably return, as Brophys is near impossible to get a seat. Sad to see all the historical photos gone and no more bowls of popcorn.

Solvang Shoe Store is the best. Worth the drive - great selection of hard to find European brands. Welcome to Santa Barbara and wish you success in your new restaurant locations.

Wow three uncool people who didn't 't fit in at Endless. For us real Harbor rats, one of our favorite bars.!!! Hope the new place makes it.

All anyone has done on Edhat for the past five months is whine about all the restaurants closing. “The Sky is falling! The sky is falling! Santa Barbara will never recover!” Here two restaurants are opening and what do they do.....whine.

We love Chomp in Solvang! So happy it’s coming to SB!

Will Salty's continue the tradition to host the Eagles Nest on Sunday mornings for football?? or where is everyone going now that the season began??

Seahawks put an end to the Eagles Nest!

Is Aaron Petersen part of the Petersen family who operated Petersen's Drive-In at State Street & Calle Laureles? Petersen's closed and then reopened in Solvang many years ago. They had spectacular hamburgers.

All this talk about weed...

How in the world does the NRA

if you return the rental and

new roads mean you can drive

no quotes from the verbal

This is the gang thing; they

...what happened to the drugs

You miss the whole point; the