***Update - Further investigation showed Cortes was the party at fault in this fatal traffic collision. Cortes is being booked for 23153 V.C. DUI causing injury and 191.5(a) P.C.- Vehicular Manslaughter.*** 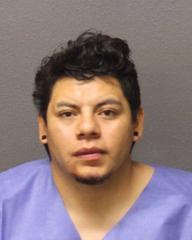 [Saturday] morning just after 3:00 the Santa Maria Police Department was notified of a traffic collision at Donovan Rd. and Miller St. Officers responded and found two vehicles that had been involved in the collision and two occupants of one of the vehicles had been ejected into the roadway. The Santa Maria Fire Department and American Medical Response ambulance service responded to treat and transport those injured in the crash.

As a result of this drug and alcohol related collision, two occupants of one of the vehicles were killed and a third remains in critical condition. The identity of those killed in the collision has not been determined; a release of their names will be pending notification of their families. The sole occupant of the second vehicle, Javier Artemio Cortes Cortes, 27 years old of Santa Maria, was arrested and booked at the Santa Barbara County Jail on DUI charges.

The collision investigation is ongoing. When the collision report is completed it will be forwarded to the Santa Barbara County District Attorney's Office for a review to determine if there will be any additional criminal charges associated with this collision.