Two firefighters were injured while battling the Thomas Fire on Sunday.

Santa Barbara County Sheriff Bill Brown confirmed the injuries at a public meeting on Sunday afternoon. He said both firefighters sustained minor injuries while fighting the blaze. One was airlifted to the hospital due to the remote location, while the other was treated at Incident Command.

According to the Ventura County Aviation Unit, one firefighter was injured Sunday afternoon in Rose Valley, near Ojai. They were responsible for airlifting the injured firefighter out of the hazardous area.

“These firefighters have been battling the Thomas Fire going on weeks now, in very unforgiving wind and terrain,” the Aviation Unit wrote on Twitter. 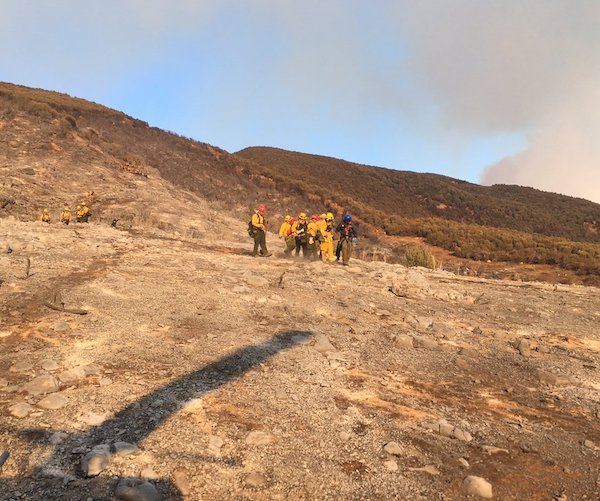 Further details were on the injuries not immediately available.

This adds a total of three reported firefighters injured and one fatality while battling the Thomas Fire. 32-year-old Cory Iverson died from burns and smoke inhalation while on the front lines near Fillmore.

The first reported firefighter injury took place on December 10th at 7:00 a.m. where a firefighter from Redding, CA suffered a fracture to his lower leg. He was transported to the hospital and was reportedly in good spirits before returning home. Below is a video of the rescue operation as he was lifted into a helicopter by the Ventura County Air Unit.

Hoist camera view of the #ThomasFire rescue today. Can't say enough about these heroic firefighters working in this steep and dangerous terrain to battle this fire. pic.twitter.com/1ChVaEEVSr

Speedy recovery to both firefighters. Your services will never be forgotten!! Thank you!

Last night at Harry's about 25 firefighters came in for dinner. As they streamed in, the whole place erupted in cheers and clapping. It was a very good moment.

Also, while on the conversation of gratitude, I looked to edhat.com for the best most current information on the fire. Why don't more people step up and pay the monthly? Edhat is the best community resource we have.

I hope those dining at Harry's picked up the tab for the firefighters! I am evacuated or I would have helped out. Wish I had been there!

All the best to all these guys for a speedy recovery and condolences to the family of the one that died.
Given the thousands working in hazardous conditions and hazardous terrain it's amazing that there haven't been more injuries. Glad about that!!!

Thanks for posting the

Back and forth...we get it.