On Friday, January 8, 2020 at approximately 9:15 P.M., the Santa Barbara Police Department was dispatched to the Amtrak Station on a report of a battery-in-progress.

Officers found a transient male in medical distress and started to provide aid until Santa Barbara Fire and medics arrived.

Police quickly associated another transient male, Steve Laurence Malec, age 50, in connection to the violent assault that had just occurred.

The victim was transported to the hospital to be treated for injuries consistent with a violent battery.

Malec was arrested and charged with assault with force causing great bodily harm, attempted murder and mayhem. He is in Santa Barbara County Jail. Bail is set at over $1M. 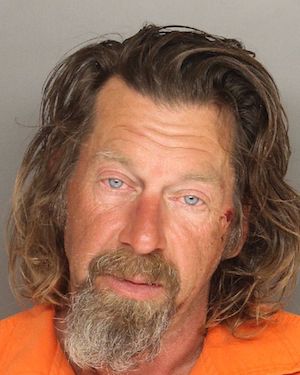 Thank you Chillin’,
For the comprehensive story.
L.E. should not have the additional job of mental health care worker thrown on their plate.

CHILLINGRILLIN, well done. You belong in justice movements. I try explaining that DEFUND the police means REFUND social services to channel that necessary work away from the street and prison--but enabling legislation to PAY for the work never gets the full throated support, does it? You have exposed that pattern: "It's the typical conservative playbook: push problems down to the local level and cut public funding. Then leave a jumble of under-equipped uncoordinated nonprofits to put a bandaid on things so ambitious politicians can say they cut the budget and big bad government and the wealthy can get tax writeoffs and pats on the back for donations". Never stop telling that truth.

So...Time to adopt a new slogan!! Stop saying “defund the police” and start saying “fund social services” if that’s what you are aiming for. Odd concept perhaps, but how about we try and use words that actually mean what we’re trying to say. And as for the homeless, that’s a problem that spans both political parties policies. Locally though, it sure seems like our plan of continually funding and enabling isn’t really working out all that well...

It's confusing to see some people make this political when they don't realize what the roots of the problem are. My uncle was SBPD in the 1960's to late 80's and said the violent homeless people started showing up after Reagan and Republicans shut down the state mental hospitals. Families couldn't or didn't want to take care of the released patients, they couldn't stay sober or keep a job, so they just bumped around between petty crime and jail. There is still nowhere for the violent, mentally ill except jail in our society. Now that mental healthcare doesn't consist of electric shocks and cruel confinement, the state and local governments should consider a better form of institutionalization than having nearly half of county jail populations consist of people with mental problems. In the long term, it would save money and give homeless mentally ill people better lives.

As you know, the letter of a law and its implementation are two very different things. The LPS Act not only ended institutionalization (a good outcome compared to the horror show before) but it put in place a legal right to prompt psychiatric evaluation and treatment. Well, the first step was done because it saved money. The second was swept under the rug and left in the hands of defunded public health agencies or county jails with limited staff and abilities to even begin treating mental health, addiction, or comorbid cases. It's the typical conservative playbook: push problems down to the local level and cut public funding. Then leave a jumble of under-equipped uncoordinated nonprofits to put a bandaid on things so ambitious politicians can say they cut the budget and big bad government and the wealthy can get tax writeoffs and pats on the back for donations. I'm not blaming one party or the other, both corrupt dinosaur herds need to be thrown out.

I see this mistruth a lot. I'm sure you didn't mean to intentionally mislead. But Reagan and "the Republicans" are not responsible for this. A 1972 CA bill called the Lanterman Petris Short Act - sponsored by one Republican and two Democrats - is. Yes, Reagan signed it into law, after it passed legislation with bi-partisan approval. The ACLU also later filed suits which pushed the act further to the place we find ourselves today - we basically can do almost nothing about the endless numbers of druggies and mentally ill people who are seriously in need of help and roaming our streets. If people think that leniency in terms of how these people can be treated with regard to arrest, incarceration, forced participation in rehabilitation programs, and holding in mental institutions (which did seriously need reform, but now hardly exist) is not a draw for bums from all over the place, they are wrong. People know where to flock in order to do their drugs and live a vagrant life on the streets. There is hard data showing that 90% of these people suffer from addiction issues, and usually co-morbid and addiction induced mental illness, and there is hardly a d*mn thing any of us can do about it. No amount of taxation or programs can help people who do not want to help themselves, and according to law, there is nothing we can do to force any of these to try.

Two years ago, I was assaulted by a transient who was camped next to the station. The police arrested the person and several months later I received a notification to the victim (me) that the person had been released. Obviously, I would never go to that station again and avoid downtown.
Pretty sad what the enablers have created here in Santa Barbara

That is awful. I am so sorry you had to go through that. Remarkable someone would downvote your comment.

I have too...maybe 4 nature, Pollyanna, can take them in !

Taking people in is not necessary.
Sponsoring people is an option. Donating is an option. Rich people really need to look at how to help. I've given a lot to SB Foundation/United Way covid funds. At least this is an attempt to prevent homelessness.
https://www.sbfoundation.org/covid-19-response-grants/

Will you can take him in if you like I made that mistake before and had to physically remove people that I had taken in several times. So I don't take people in anymore and with this pandemic the city is losing a battle. There really is nothing that can be done at this point.

Not everyone had the privilege of favorable genetics, money, love, and stability. How about helping them to recover from traumas and other unfortunate problems of life?

No one has pooped in their front yard, have they? LOL

We need help, for all the mental issues...I have encountered so many, in the last few weeks.

He kinda look like one of those guys from that group of thugs who crashed DC I bet alot of those attackers are hiding in the bushes across the states..

It would be interesting to see the cost of public resources (Police, Fire, Medical) Santa Barbara puts into transient/homeless responses. If those funds go to housing/treating the local homeless and shipping transient homeless people out of town we'd be better off. I fear the level of acceptance this city has become accustomed to over the last 12-24 months. The camps are out of control.

We could take everyone living on the streets into custody and treat their addiction and mental health issues. Our community would be cleaner and safer, and pour souls like the fellows described in this article could live in healthy and humane conditions. Of course that will never happen in California. Instead, incidents like this will occur with increasing frequency. The zombie invasion continues...

To be taken into involuntary custody the person must be a danger to themself or others, otherwise the person must agree. Agree or not this should never happen. Every person, voluntary or not, taken into custody for treatment will soon be replaced on the street by another person with similar needs. Any attempt to remove a person for involuntary treatment will likely be met with opposition by civil rights advocates. I believe it was in the 80's cops tried to round up "junkies" and hospitalize them for their addiction. This was opposed by many as it was considered a civil rights violation. They ended up being arrested and jailed.

PITMIX i don't mind paying taxes when there used wisely. When I travel and see the condition of the roads and how clean they are compared to CA I'm quite disappointed. Our gas tax and DMV fees are some of the highest in the nation. Are our road in better condition than the rest of the nation? NO!! Constantly raising Sales tax, Property taxes and bonds to help the schools? I remember the lottery was going to be an end all stream of money for our schools, Now there some of the worst in the nation and they want more money. More money wont fix the homeless mental illness problem. Spending wisely will be a good start.

Thank the ACLU and our political "leaders" who's Party has been in complete control of the State for the last 25 yrs.

Yes, let's raise taxes to pay for this care. I'll bet the non-left on this site will totally be on board with that. They LOVE to pay taxes.

This is getting ridiculous.

Just like those good people who tried to take the capitol dirt bags.

Light fires, assaulting people, stabbing on the Westside last week, attempted murder.... These vargrants (transients) bring so to the community.

You must have a very low

The article says it will be

First of all there was no

I was out back when it

It's akin to George pushing

2 million for that? nice

DUKE - you are dead right. I

down the street from my work