Wednesday's rainstorm brought nearly two inches of rain for some areas as it started in the late afternoon. NWS predicted rates of 0.25-0.50" per hour, with local rates to 0.70" per hour and issued a flood advisory until 11:00 p.m. which was upgraded to a flash flood warning in some areas until almost 9:00 p.m.

Just after 9:30 p.m., NWS issued a Tornado Warning including Carpinteria, Montecito, and Summerland until 10:30 p.m. with the possibility of penny-sized hail. 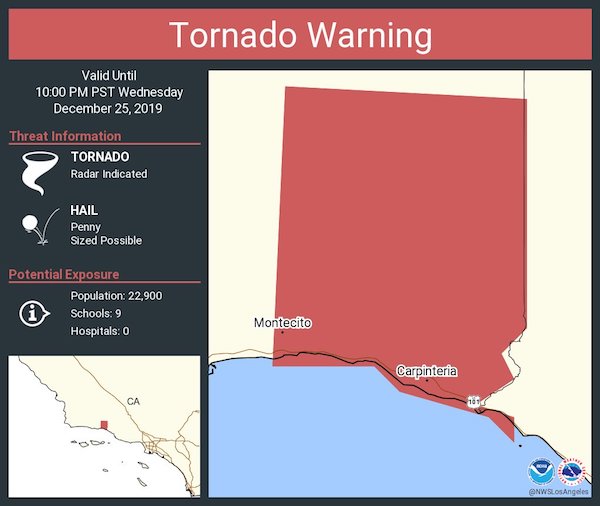 As 10:21 p.m., NWS announced the tornado warning was cancelled. "The Tornado Warning that was in effect for southeastern Santa Barbara County has been CANCELLED as the storm has weakened and does not appear capable of producing a tornado," the alert stated.

Additionally, NWS produced images showing where the tornado was forming and might have landed.However, there were no reports of a tornado or any damage.

Between 9 to 930 pm last evening, a rotating storm cell over the SBA Channel moved north towards Montecito. The red rectangle box indicated where the Tornado Warning was valid. The circulation held together as it reached land, but there were no reports of damage. #cawx #CAstorm pic.twitter.com/ivx425TnEy

Edhat readers reached out to share their shock of such a warning. "Really? Now Tornados?" one subscriber wrote in. Luckily, we were spared from such a rare occurrence.

Ventura County, however, was not so lucky. NWS updated their report and confirmed a narrow EF0 tornado touched down near the Santa Clara River and moved less than 1 mi NNW across the harbor. Damage was limited to trees, roof tiles, and canopies.

This morning we conducted a storm survey for possible tornado damage at @VenturaHarbor. We have confirmed that a narrow EF0 tornado touched down near the Santa Clara River and moved less than 1 mi NNW across the harbor. Damage was limited to trees, roof tiles, and canopies. #CAwx pic.twitter.com/F6ZifTWlOM