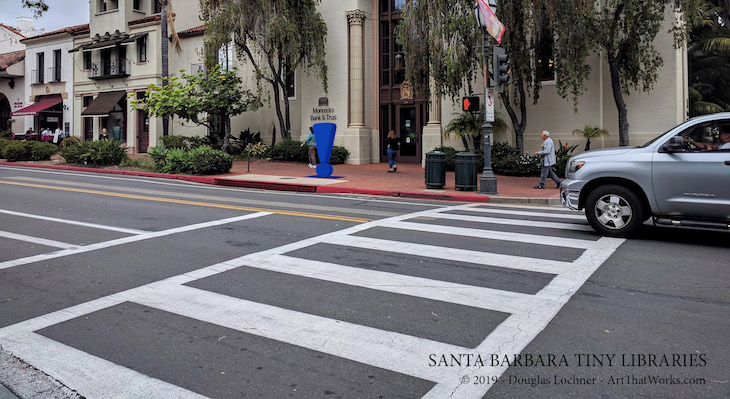 Santa Barbara Mayor Cathy Murillo shared, “These libraries will create the opportunity for people to read for pleasure. How wonderful it will be to lose yourself in a novel or pick up a book because the title or subject sparked your curiosity. I tell the students I mentor that to be a good writer, you must be a good reader. This project will connect us to information, to stories, to ourselves.”

Lochner, whose work has been exhibited along the Central Coast, will receive a stipend of $10,000. Lochner is known locally for his Wings of Honorproject, which is slated to debut at the Santa Barbara Airport in 2020.

Tiny libraries... but NO benches for people to sit on. How thoughtful.

I like this idea and it is a positive thing - but there are so many problems with State Street I don't think this will garner much appreciation. I refused to frequent downtown any longer. I've been harassed on too many occasions by the aggressive homeless that frequent the area. The amount of empty stores makes downtown look like it is in a depression. Too much alcohol drinking going on throughout the day and too many impaired drivers. It's just not fun anymore.

Interesting to see how long those last.

i don't get it...so are we that lazy now that we can't just walk 1/2 block off of State to the actual library...so now we need mini versions on State?

Surprisingly, there are fewer bums on State than camped out in the library...

It's interesting to contrast Murillo's pollyanna speeches with her petty actions on the Council. I'll take right minded action over flowery speech any day. BTW, these books are going straight into a bum's cart...without benches, no one is going to stop and read the Library's cast offs.

Well, you take the books home to read. Who would be sitting on a bench long enough to read a novel?

Flicka, considering that there ARE NO benches on State st. anymore for us good citizens because the city took them all to deter homeless people from using them. A lose/lose for everyone. The cops cannot be bothered to move vagrants along away from benches on State st. so we ALL LOSE.

Eight comments thus far, six of them negative. Par for edhat these days. And BTW, I think the tiny libraries are a terrific idea!

994..
Your comment is also negative..
Towards this forum as well as the commenters with whom you disagree.

“Little Free Libraries” already installed all over Santa Barbara in front of private residences have created an opportunity for people to exchange books with the community. I hope the tiny State street libraries are as successful!

Great idea but the brief from the City was - "We seek artwork that captures the spirit and ideals of Santa Barbara"
How on earth do a series of large punctuation marks fit that brief?
These could go in any city in any country, they say literally nothing about SB.
That said, the meager $10k offered by the City and the artist having to provide all materials and work space all but guaranteed this sort of response.

This a temporary installation like the other sculptures they periodically install on State. I'm not sure I like how these look, but books are always a good addition to any environment.

There's a real double standard in the way these organisations treat art vs. regular construction projects.
If the City had to construct ONE 6ft tall metal question mark they would burn through $10,000 before the plans were approved, it would be a prevailing wage job and all of the craftsman involved would get paid, but call it an art project and they expect the artist to buy materials, provide the labor and work space to make 6 of these things under $10k. Because the artist will benefit from the "exposure"! You would think an office of arts and culture would value artists work at least as much as that of any construction worker. Enough of these bogus "art" competitions that basically ask artists to work for free.