At 11:30 a.m. Thursday, county fire crews responded to a 5-acre fire in Santa Ynez Valley near Highway 101, north of SR-154. Dubbed the Woodchopper fire, this one grew to 21.7 acres and two electrical boom trucks were destroyed. The cause is under investigation.

Not long after, a second fire sparked off 6859 Cat Canyon Road at approximately 2.2 acres, called the Cat Canyon Fire. The cause is under investigation for this fire as well.

Both were contained by county firefighters who were assisted by the US Forest Service, Lompoc Fire, and Santa Maria Fire Departments.

#VegFire-#WoodchopperFire- SBC, USFS,CalFire, tankers/copter on scene for 5 acre fire. 101 north of Hwy 154 in SY Valley. C/T 11:30 Additionally-This is the 2nd fire off 6859 Cat Canyon- 4 acres at this time. Not related, but under same command. **Call Newsline** pic.twitter.com/D8QbdMCKsr

At 2:15 a.m. Friday, County firefighters responded to another reported vegetation fire in the same area of the Woodchopper fire from Thursday, along Highway 101 northbound of the SR-154 exit near Alisos Canyon. However, this new fire was outside the perimeter of Thursday's fire.

Upon arrival, the fire was 1/4 acre in size, but it grew to 24 acres. Called the Woodchopper 2 fire, it took one hour for crews to contain the spot fire. There were no structures threated and no injuries reported.

The cause is under investigation but Public Information Officer Mike Eliason reports there were PG&E trucks in the area working on lines. 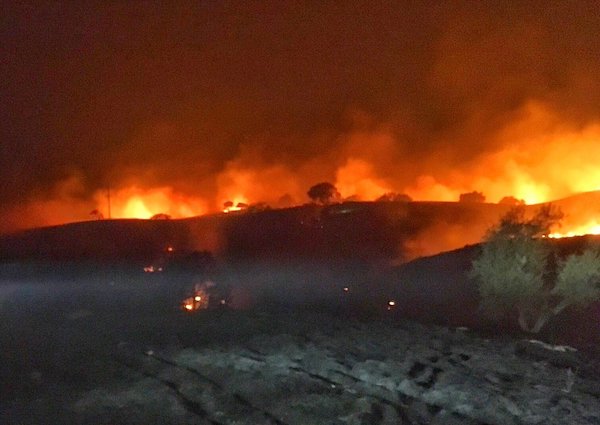 Power lines down in the area...

Sounds like a new start at the location of the 10 acre fire the other day.. There is Air Support on scene hoping to hold it at 5 Acres...

They are hitting this one hard don't want to take any chances..

Just heard a Copter pilot say 10 Acres and it's at Woodchopper...

The Northbound 101 is closed there but they might open one lane with an escort.

Me too got the crap scared out of me this morning could not breathe was having a severe asthma problem bad headache 3 days, raw throat thought this was it. Took acouple aniexty pills and used my inhaler much better now did not have to go to Cottage Thank the Good Dog!

Incoming resources respond to 6965 Cat Canyon Road..According to the CHP Website there is still smoke blowing across the road and that is why it is closed.

Dozers cancelled on this fire sounds like they are going to get a handle on it..Looking into opening one lane Northbound.

Number 2 lane opened about 3:00 pm, will release all but initial engines by 5:00 pm or sooner.

I am not sure how this

They broke into a major water

VOICE - per capita is useful

Zerohawk did, a few times.

"those that say this doesn't