Thomas Maged Corry of Goleta passed away peacefully on May 23rd at his home, two weeks shy of his 93rd birthday. 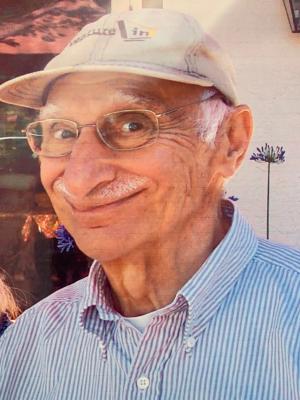 Tom was born in Pittsburgh, PA right before the Great Depression. At the age of 13 he became the man of the family upon his father’s unexpected death. Tom played football in high school and was named MVP. He was a lifelong fan of the Pittsburgh Steelers and Pirates.

Tom served in the Navy during WWII in the Philippines. Tom met his future wife at a USO dance and married Marie in 1951. They were married for 65 years and had four sons, Tom (Colleen), Steve (Marie), Vince and Dan (Lori).

He went to Carnegie Tech. on the GI Bill and received a degree in electrical engineering. Tom worked for Westinghouse in Pittsburgh and then got a job with Delco Electronics and moved to Santa Barbara in 1963. He received many patents for his work. After retiring he created a successful electronics firm which is still  thriving. Tom moved on to poetry, video making, book writing and many other creative pursuits. He volunteered for the Santa Barbara Night Counseling Center,and graduated from the Santa Barbara School of Massage in the early 70’s.

He was always working on something, persisting on whatever it was until it was mastered. Walking in nature, and savoring the life around him were part of his daily routine. He was a quiet man with a wonderful sense of humor. With a profound insight on life, he was a silent benefactor to those in his presence.Tom. He always took a profound honest interest in whoever he was with. He was a caring and devoted husband, father and grandfather. He never missed an activity his children and grandchildren participated in. Tom never wanted to slowdown he truly tried his best to be mentally and physically active till the end.

Tom was preceded in death by his parents, Tom and Helen Corry, his brothers Eugene and George, his grandson Tommy, and his wife Marie. He is survived by his sister Helen,  his four sons, 6 grandchildren and one great grandchild.

The family is very appreciative of the care that he received from his caretakers, Isabel, Pattti, Mercedes and Anabel as well as the Visiting Nurse Hospice and Food from the Heart. The family would also like to recognize some of the people who had a special connection with Tom, including Jen, Clara, Johanna, Donnis, James and Tina, and last but not least, Mr. Neil.

A service will be held on June 28th at 9:00 AM at St Marks Catholic Church followed by a  reception at his home.

Please email his son Daniel at [email protected] if you would like to attend.

Toggle Comments (Show)
Thomas Maged Corry
I'm sad to learn of Tom's passing, even having only enjoyed a few brief times with him some years ago. RIP
Please Login or Register to comment on this.

I'd much rather be called a

It's just west of La Cumbre

I tested this with a pulse

The East Side Fireworks were

Exactly, there were no police

Mountainman - Can you be more

The Mt. View area had some