The Science of Debris Flows

Firefighters look under a bridge at a creek in Montecito that was jammed solid with debris from the deadly rains and mudflow on January 9th. (Photo: Blake Herman/SB County Fire)

As a powerful storm neared the South Coast on Monday, a new mandatory evacuation order for all residents below burn areas conveyed a painful reality: no one knows when or where the next torrent of mud and boulders will come surging down the scorched mountainside into town.

But it’s a good bet that it could happen, given enough rain. According to a recent report by a team of state hydrologists and geologists, 50 out of 138 streams and tributaries in the mountains above Montecito and Carpinteria have a 60 percent or greater likelihood of producing debris flows in the aftermath of the Thomas Fire, based on a rainfall rate of about 1 inch per hour.

The same relatively high odds were reported for Ventura County burn areas. The risks could remain high for two to five years, until the vegetation grows back, scientists said.

“I’ve never seen this degree of hazard, compared to other fires, and I’ve done post-fire hazard assessments for the past 10 years of my career,” said Drew Coe, the Cal Fire hydrologist who headed the state Watershed Emergency Response Team for the Thomas Fire. Twenty-six scientists started work on the report in early January, before the catastrophic debris flow of Jan. 9, and before the fire was contained on Jan. 12. 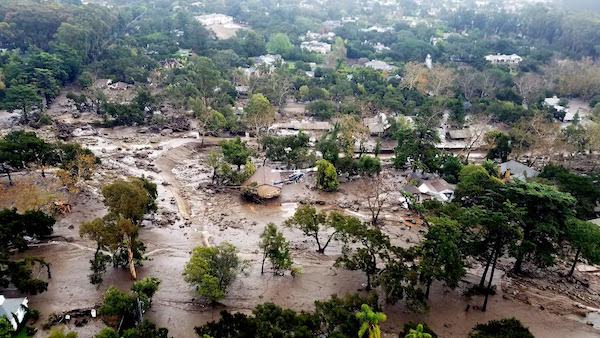 As the Independent has reported, the team rushed a preliminary report to Santa Barbara County officials on Jan. 7, thirty hours before the deluge, highlighting the danger of flooding and debris flows roughly from East Mountain Drive to East Valley Road and a few lower-lying areas in Montecito. Fatefully, the county opted not to order mandatory evacuations for the areas highlighted by the team south of East Valley; in one of those spots, just below the intersection of East Valley and Montecito Creek, 11 people died on Jan. 9.

For Tuesday through Thursday, the National Weather Service is forecasting an “atmospheric river event” that could bring as much as half- to three-quarters of an inch per hour. But forecasters are not ruling out “isolated rainfall rates” as high as one inch per hour, especially as the storm system cold front approaches the area between Wednesday night and Thursday morning. The storm could bring 10 inches of rain to the burn areas, forecasters said. A flash flood watch is in effect.

The post-fire season for communities below the Thomas Fire burn area is uniquely perilous, Coe said, in part because the fire, the largest in modern California history, sat around and baked the ground, creating a water-repellent crust. By contrast, he said, the October fires in Sonoma County, though devastating to life and property, moved through quickly and didn’t alter the soil. Also, Coe said, Sonoma County is not at risk from such steep, easily-eroded slopes as those in the Santa Ynez Mountains above Montecito and Carpinteria, or the Topatopa Mountains above Ojai.

According to the recent report, Montecito is located downslope and downstream of some of some of the highest elevations, steepest slopes and most severely burned terrain within the 440 square-mile footprint of the Thomas Fire, which started in Ventura County last Dec. 4. The creek canyons above Montecito are deeply incised, many of them with side slopes pitched at 45-degree angles. Since Jan. 9, the report said, the debris is piled high within them and “could be mobilized again.”

The prehistoric geology of the place poses yet another danger, scientists found. Much of Montecito is located on debris flows that, during big storms, were deposited at the mouths of canyons over thousands of years. Most of Montecito’s 4,400 homes are built on top of these ancient deposits, called alluvial fans.

Remote sensing imagery, or LIDAR, taken of Montecito by air after Jan. 9, using light from a laser to survey the ground, has revealed several old abandoned channels across these fans – effectively, low spots that future debris flows could migrate to, jumping the creek banks, Coe said. The report noted that “residential development is dense along these channels” and that their debris flow potential was “not verified with the county prior to the development of these areas.”

“The difficulty in Montecito is the degree of unpredictability of where the streams are going to move,” Coe said. “Really, it was the imagery that let us know the alluvial fan hazards we were dealing with. Every one of those moderate-to-large-sized streams has a fan, and they’re all coalescing.”

Carpinteria is equally at risk of post-fire debris flows, scientists found, with the added danger of rockfalls in upper Oil Canyon and the front country north of town, where numerous large boulders can be seen at the base of steep rocky slopes. The mountains behind Carpinteria have experienced landslides and gullies even in the absence of fire. Post-fire, “mass movements should be expected,” the report said.

The danger of flooding in communities under the burn area is heightened, too. In 1969, the report noted, high-intensity rains caused debris flows that blocked culverts, bridges and creeks, causing widespread flooding in Carpinteria. That was five years after the Coyote Fire burned 100 square miles above Santa Barbara, Montecito, Summerland and Carpinteria – the county’s first big urban fire.

Starting on mountain roads and working their way down through the urban areas, the Thomas Fire watershed team identified 178 homes, businesses, parks, golf courses, roads, highways, farm buildings, railroad lines and gas lines in Montecito and Carpinteria with a “high,” “moderate” or “low” risk of “hazard to life” from future debris flows. Most of these structures were near streams, on alluvial fans or in the flood plain, and many were damaged on Jan. 9.

The addresses or approximate location of each of these “values-at-risk” were included in the report, which listed 397 similar values-at-risk in Ventura County, plus 63 that were located in oil fields, including active oil wells, pipelines, tanks and processing plants.

The lists do not represent an official hazard assessment, Coe said; they are the results of a rapid survey and are meant to provide tools for post-fire planning.

As the second big storm of this winter approaches, the U.S. Army Corps of Engineers has nearly finished clearing the last of 11 catch basins on Montecito and Carpinteria creeks that were filled to overflowing on Jan. 9, county officials said. The basin where the cleanup still continues, on Santa Monica Creek, is the largest of the 11; it is believed to have prevented major damage to Carpinteria.

The 11 basins trapped only a small percentage of 2.5 million cubic yards of debris that were estimated to have been deposited on Jan. 9 in Montecito and Carpinteria. But, Coe said, the basins “made a real difference” because they also significantly slowed the torrent of mud and rocks as it approached the urban areas.

“It’s not just the material you’re trapping; you’re reducing the velocity of the flows,” he said.

In preparation for storms such as the one now on the way, the watershed report advises residents “first and foremost” to heed evacuation warnings from local officials.

“Don’t rely on what you’ve seen in past debris flows,” it says. “Debris flows can hit new areas or return to previous areas; they might be smaller – or larger – the next time. Whatever happened before, the next time could be different.”

Agree that we need and can do

Actually, they were shut down

90% of businesses in the

Have these experts taken into

PUG by now you should know

PUG by now you should know

I'm not so great with

The fish rots from the head.

Trophy shops, the scourge of