The Rescue Dogs of the Montecito Mudslides

The edhat staff searched for photos and descriptions containing these four legged heroes. We recognize there are many more involved, but these are just a few of their stories.

#CAstorm- Santa Barbara County Firefighter’s use a search dog to look for victims where multiple homes once stood in Montecito following flooding due to heavy rain. pic.twitter.com/xZcI4PNmej #CAstorm- Just a few of the 29 USAR K9’s helping with the search for the missing are decontaminated from the muddy conditions each day. **Video by Capt. Corey Stowe/Santa Barbara County Fire** pic.twitter.com/idcYmsmIPv

Santa Barbara County Firefighter Tim Wright helps wash a search dog after it searched the mud and debris for the missing in Montecito. 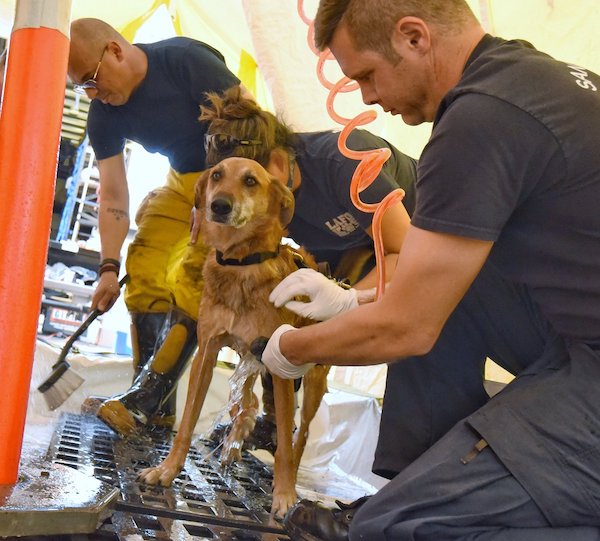 Photo: Mike Eliason
The San Diego Urban Search & Rescue California Task Force 8 canine team was deployed to Montecito on January 10. The next day the team assisted the local fire department by searching structures and vehicles that were impacted by the mudslides. They faced many hazards including natural gas leaks, downed power lines, partially fallen trees, and mud and dirt that can shift at any time onto firefighters. The mud was anywhere from 6 inches to 2 feet deep.
The team used sticks and poles to gauge the depth. There were also many swimming pools in this area which creates a hazard for the dogs and the firefighters where two dogs fell into a pool and were quickly recovered by the team. Fortunately, no one was hurt. 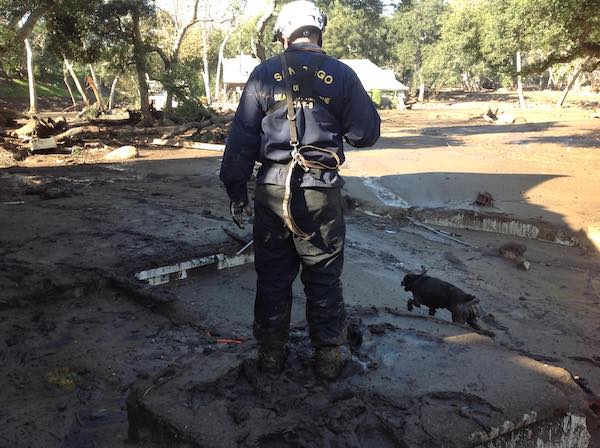 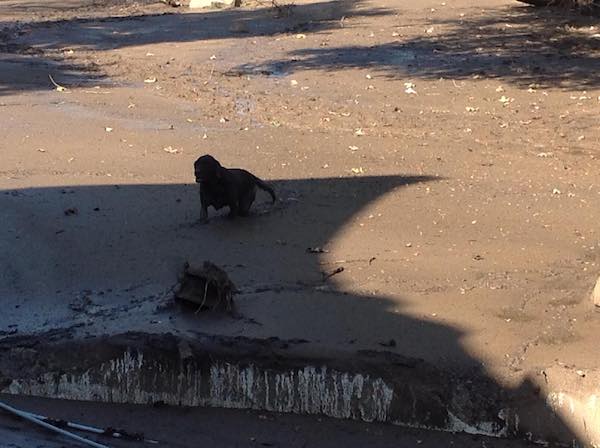 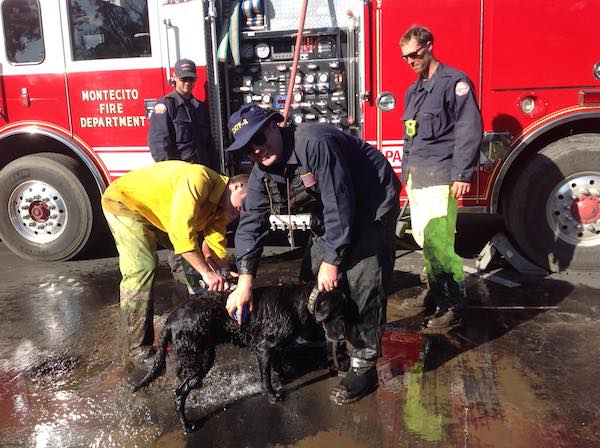 Meet the Dogs of the National Disaster Search Dog Foundation

Asta (Dog) and Sonja (Human)
Sonja Heritage relocated to Santa Paula as the Search Dog Foundation’s Head Canine Trainer and brought her trusted partner Asta. As a civilian member of Virginia Task Force 1 for over fifteen years, Sonja had trained several of her own canines, Asta being the most recently FEMA Certified partner. This is the team’s first deployment with their California teammates. Sadie (dog) and Doug (human)
Sadie was discovered in La Belle, MO in January of 2011. Last year Sadie was paired with veteran Canine Handler, Captain Doug Van Iwaarden of the Orange County Fire Authority. The team achieved Certification in 5 months and this is the team’s fourth deployment. 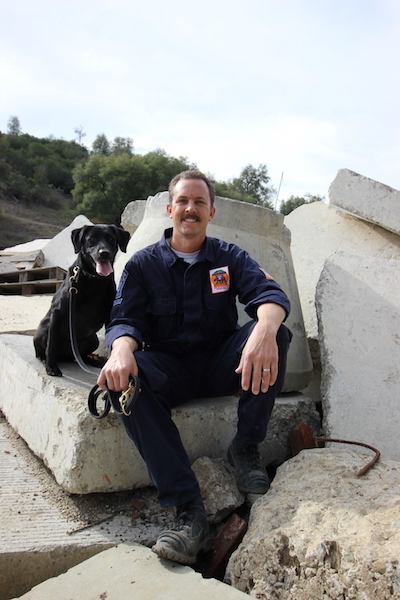 Rocket (dog) and Mike (human)
Due to Rocket's high energy, he was considered unadoptable and placed on the euthanasia list at a shelter before coming to the SPCA. Rocket thrived in training and was partnered with Engineer Mike Stornetta of the Windsor Fire Protection District on August 6, 2014. Mike and Rocket deployed following Hurricanes Harvey and Irma last year - this is now their fourth deployment together. 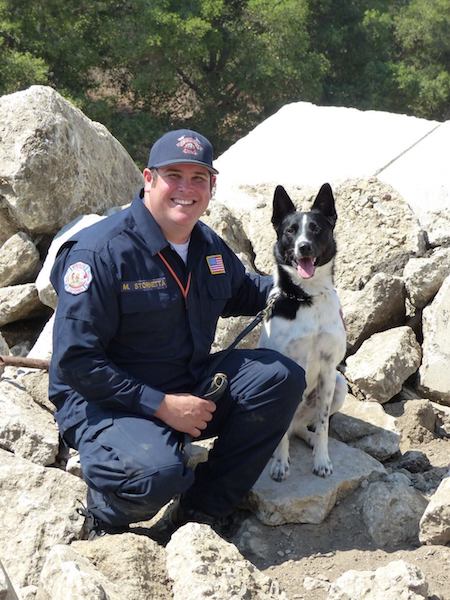 Ollie (dog) and Donovan (human)
Ollie was discovered in South Dakota. He’d been picked up as a stray and no one ever came to claim the happy and energetic mutt. Ollie’s acrobatic abilities that had him climbing fences made him a natural on the rubble pile. On April 1, 2014, Ollie was paired with Firefighter Donovan George of Orange County Fire Authority. They achieved in February 2015 and this is the team’s second major deployment. 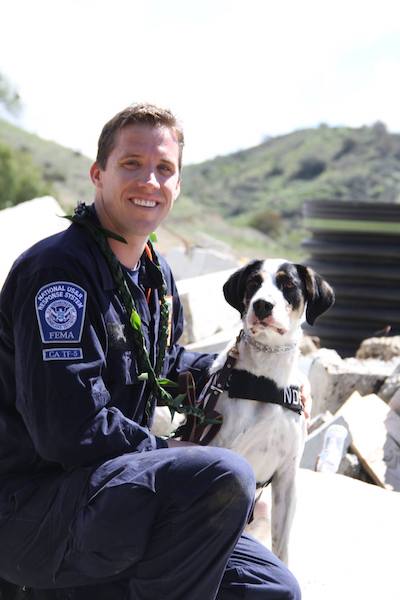 Stella (dog) and Matt (human)
Stella was donated by her in 2009 where she graduated from training and was paired with Handler Matthew Kirk of Heartland Fire & Rescue. The team trained daily as members of San Diego Urban Search & Rescue - California Task Force 8 (CA-TF8) and achieved Certification on June 13, 2010. This is Stella and Matt’s second major deployment. Decker (dog) and Brent (human)
Decker was discovered in South Dakota after spending nearly seven months in a shelter in the hopes of finding a forever home. On June 13, 2014, Decker was partnered with Brent Brainard of San Diego Fire-Rescue Department and the team achieved Certification just five months later. This is Brent & Decker’s fourth deployment. Jake (dog) and Eric (human)
Jake was brought into the Nebraska Humane Society in Omaha after he was found wandering the streets as a stray. When, sadly, no one came to claim him, he was put up for adoption. Jake passed SDF’s evaluation with flying colors and graduated the training program in February of 2015 and was partnered with Eric Lieuwen of Sacramento Airport Fire and California Task Force 7. The team trained daily and in September 2015, achieved Certification. Java (dog) and Eric (human)
Java, a five-year-old Plott Hound mix, was picked up as a stray by the Humboldt County Animal Shelter in McKinleyville, CA. During a routine visit to this shelter to help save canine lives, staff from Bones Pet Rescue of Covelo, CA adopted Java in an attempt to find her a great home before her time was up. She was discovered by SDF supporters and identified as a potential search and rescue candidate. Java spent the next 6 months in Search Dog boot camp and on November 5, 2012, Java was partnered with Eric Ingstad, a Firefighter/Paramedic with Los Angeles FD. After responding to Hurricanes Harvey and Irma last fall, this marks their fourth deployment to search for unaccounted disaster victims. Roxy (dog) and Cynthia (human)
In 2012, this cheerful mutt was surrendered by her owner to the Sacramento SPCA. Having a long-standing professional relationship with SDF, staff at the Sacramento SPCA contacted SDF when they observed that Roxy had characteristics typically desirable in Search Dog candidates. Roxy was accepted immediately and on November 5, 2012, she graduated the canine training program and was partnered with Cynthia Sato, a veteran of the U.S. Forest Service who had spent the past seven years as a firefighter/paramedic with the Los Angeles FD. The team first achieved Certification in 2013 and this is their third deployment. 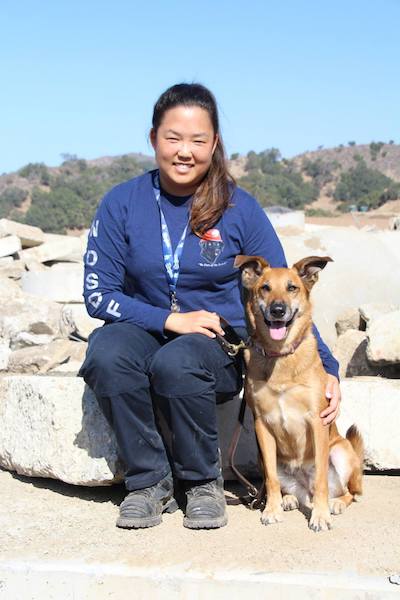 Ty (dog) and Dennis (human)
This huge, handsome Black Lab was rescued by Southern Oregon Humane Society's (SoHumane) “Saving Train” – a converted bus that travels throughout Oregon and California, picking up dogs and cats at shelters where they are destined for euthanasia and transferring them to their shelter in Medford, OR. Sickly from living on the streets, it took several months to nurse Ty back to health, but he was strong as a horse when accepted into SDF’s training program. After many months of professional training at Sundowners Kennels, Ty was paired with Los Angeles County Fire Department Captain Dennis DiMarzio in May of 2011. The team worked intensively with California Task Force 2 to achieve Certification in June of 2012 and they have since deployed four times. 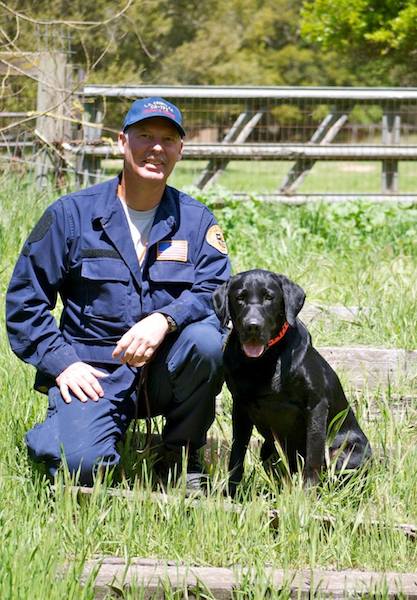 Rugby (Dog) and Dennis (human)
After finding an ad in the local newspaper about this high-energy dog, Rugby was evaluated for SDF. In May of 2011, Rugby was paired with Captain Dennis Clark of the Los Angeles County Fire Department. Since first achieving Certification in 2012, Dennis and Rugby have deployed seven times, to vehicle crashes and missing person searches, as well as internationally following deadly earthquakes in Nepal in 2015 and Mexico City in 2017. 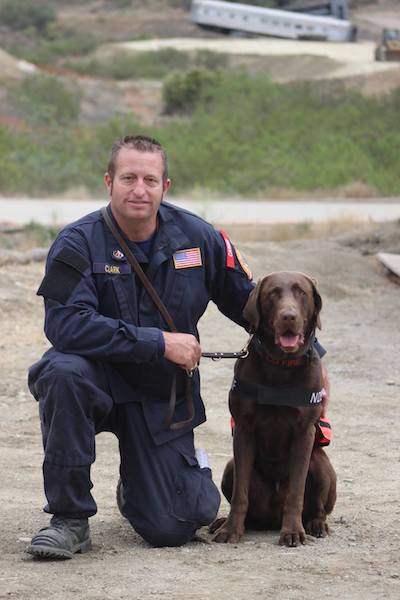 Eva (dog) and Manny (human)
Eva was donated to SDF by a Southern California resident and began training almost immediately after impressing our trainers during her evaluation. Bold and athletic, Eva was quick to learn and graceful on rubble. On January 22, 2016, Eva graduated and was partnered with Captain Manny Sampang of the Los Angeles County Fire Department. The new team achieved Certification in November of 2016 and their first call to duty came one month later when, tragically, a eucalyptus tree collapsed on a wedding party celebrating in a Whittier park, killing one person and injuring seven others. They have since deployed to Mexico City following the deadly earthquake in September 2017 and Manny was recently promoted to the role of their Task Force Canine Coordinator. 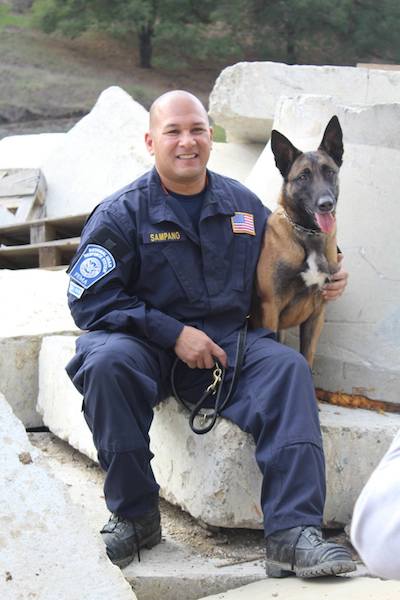 Diva (dog) and Jason (human)
At the beginning of 2015, SDF staff were contacted by a canine trainer from the Salt Lake City, UT area who had been working with a client’s beautiful, yet unruly, Belgian Malinois that she felt was destined for more than life as a pet. The trainer had spoken with the young dog’s owners and they had agreed that if just the right place was found, they would consider transferring ownership of Diva into a working field where she could put her skills to use. Diva proved to be an ideal canine candidate and graduated on January 22, 2016. That day she was partnered with Firefighter/Paramedic Jason Dobbins of the Los Angeles County Fire Department. Diva now lives with Jason’s family in their home, and they work hard to hone their skills as a search team. Their first deployment with California Task Force 2 was the 2017 mission to search for citizens in Mexico City affected by a devastating earthquake. 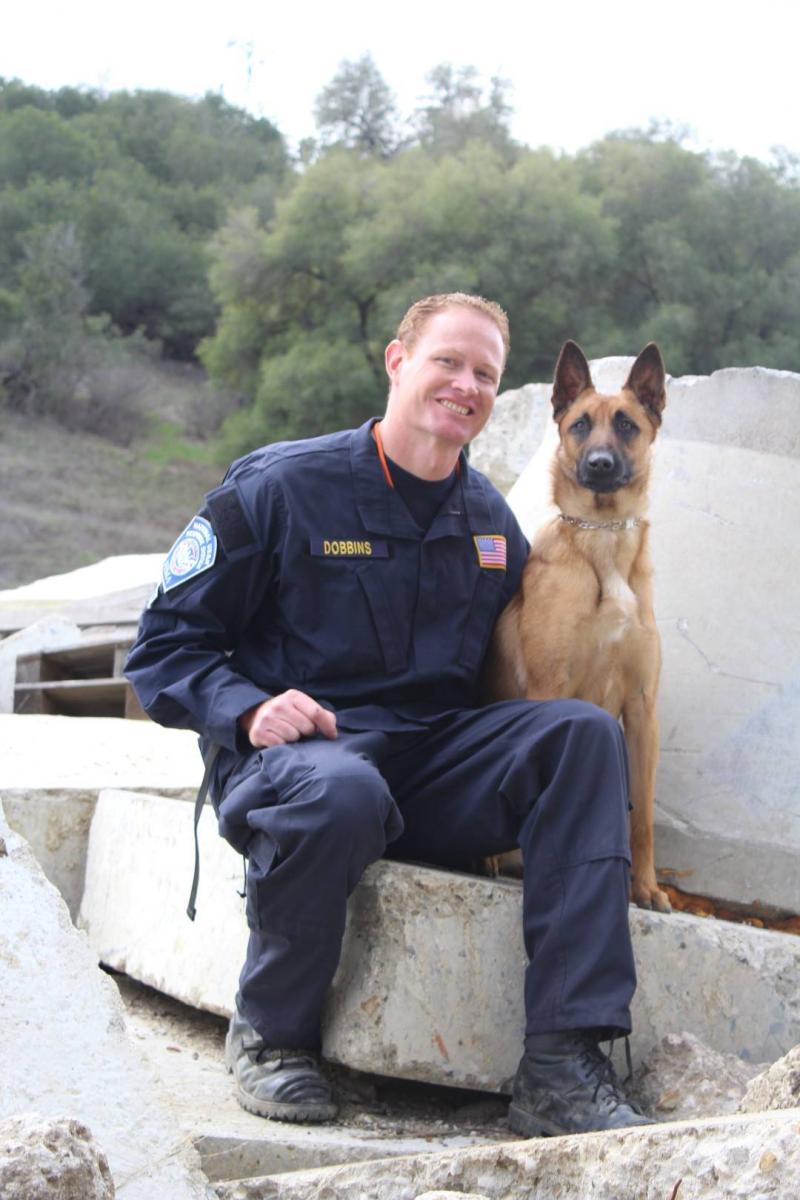 Clancy (dog) and Jake (human)
Clancy was discovered by an SDF volunteer who had seen him advertised online as a high energy dog needing a good home. When the volunteer called to inquire about Clancy, she loved what she heard and immediately wanted to evaluate him for SDF’s program. Originally partnered with another SDF Handler, that Handler’s family situation necessitated a big change and he was unable to continue as a Handler. As Clancy was certainly not ready for retirement, he came back to the National Training Center and was partnered with new Handler, Jake Armendariz of the Los Angeles County Fire Department on September 24, 2015. This is Jake and Clancy’s second deployment together, as they deployed to the Mexico City earthquake in September 2017. 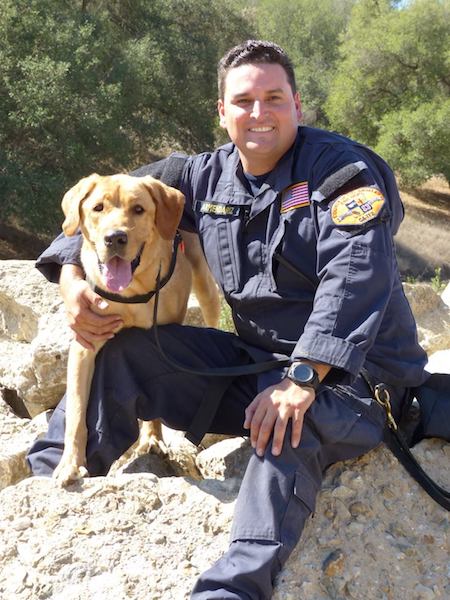 Cajun (dog) and Josh (human)
In 2015, Cajun was donated to SDF and graduated the training program on January 22, 2016 when he was partnered with firefighter Josh Flores of the Los Angeles County Fire Department. The team achieved Certification several months later and are now eligible to deploy anywhere in the world with their Task Force. This is Josh and Cajun’s first deployment in the field! 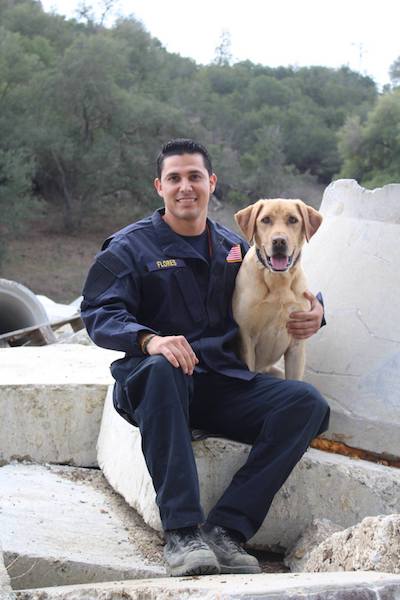 There were many more dogs and handlers involved during the Montecito Mudslide rescue, these are just a few of their stories.