The Laying Down of Blankets: Where Santa Barbara Civility Goes to Die

Some of the more civilized blanket layers with plenty of space

Concerts in the Park is a summer staple in Santa Barbara, but reserving blanket space feels like running with the bulls.

Tonight is the final concert at Chase Palm Park as part of the annual summer series hosted by the Parks & Recreation Department. It's a free event where locals and visitors are welcome to bring a picnic, enjoy music, and dance to their heart's content.

Due to its massive popularity, Parks & Rec decided a while back to prevent people from claiming blanket space until noon on the event day. I'm assuming this was due to the aggressive space claiming that we're all used to during State Street parades.

I've attended these concerts numerous times, but normally I'm happy with showing up when the event starts and enjoying from afar. Today, I organized a group to meet and figured I should try to reserve some space for all of us to be comfortable. 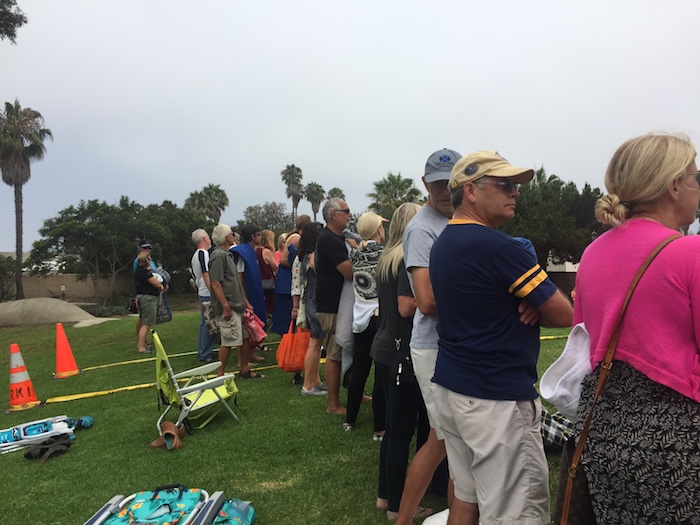 I arrived at Chase Palm Park around 11:40 a.m. and there were already more than 50 people standing at the perimeter of the grass. They were clutching their beach chairs and blankets standing shoulder to shoulder like gladiators entering the Colosseum. Two Parks & Rec officials were holding the crowd at bay as I heard middle-aged adults laugh and joke about tripping and shoving others when the whistle blows.

Scanning the park, I had no idea which spaces were most desirable and which were not. It's a large open grassy field and plenty of space for everyone. I stood behind a few people and scrolled through my phone for 15 minutes until a middle-aged white man shoved through me to get to the front of the line. No apology.

With 5 minutes until noon, a section of people starting to run, immediately being called back by officials. These false starts happened about 3 times before the officials gave up and everyone started sprinting across the grass. Blankets went flying and chairs were being thrown ahead to apparently guard a piece of grass. I saw an elderly man nearly trip a young woman, a middle-aged woman swan dove onto a blanket, and a child froze in place looking terrified.

I stood in the back then walked very slowly when a middle-aged man shoved through me and a woman man boxed me out with her elbows. Again, no apologies. Through it all, I was still able to politely lay my blanket down towards the front of the stage.

I looked around and wondered what was so important that people would throw their civility out the window to have their blanket on a piece of grass? Specifically, a piece of grass that they would be sitting on all evening next to someone they just argued and fought with hours earlier.

For some reason, the center aisle appeared to be highly coveted as I heard a middle-aged man wearing cycling gear yell, "Who's in charge here?! This woman is stealing my blanket space!" Yep. Just as toddlers fight over a precious toy, these two adults were fighting over where their blanket line was. The man was yelling for an official while the woman laid her entire body across the blanket to protect him from moving it.

I captured the very end of the argument on video because that's the world we live in now, and it was that ridiculous. Eventually, the woman agreed to get off the blanket and space was made.

While I was pleased with the space I claimed, I'm left wondering, why is any of this necessary? And when did Santa Barbarans become so entitled that arguing over blankets being too close is acceptable behavior? For an event that promotes community friendliness, it was disheartening to watch.

For those who enjoy a more civilized environment, come with your blanket before 6:00 p.m. and find any space to sit and enjoy the music. Tonight's entertainment is "The Blue Breeze Band" featuring the best of Motown and R&B.

Lauren is a member of the edhat staff who enjoys Motown classics and prefers love, not blanket war.

Lauren, Based on your

Alex, The original crime was

There are black racists

What a bummer. I looked at

In cities where anarchy and

I think it's a great idea. I

ERICL - your comments are