The Fire Next Time

When the weather cooled down last week, offering relief from record 100-degree heat, Eric Peterson, the county fire chief, hiked into the foothills of Goleta to the spot where the Holiday Fire was halted on July 6 near the national forest boundary.

At about 10 p.m. that night off North Fairview Avenue, two county fire bulldozer operators, starting from opposite directions, demolished a swath of chaparral about 500 yards long and eight feet wide along a ridgeline and down steep slopes, punching out a “fuel break” to stop the fire. As the flames raced uphill, Peterson said, the men called in an aerial water drop “to keep themselves from getting incinerated.”

“These guys probably would have died, had that helicopter not been there,” Peterson said. “Keep in mind: It’s dark, they’re covered with smoke, there’s embers flying everywhere. They got drenched. But they were able to get in front of this fire and cut it off.”

Yet for all the success of their operation, Peterson is fed up with risking his men in bulldozers while fires explode around them. A native of Santa Barbara who grew up in chaparral country on West Camino Cielo, the blunt-spoken chief has become a vocal advocate for a project that environmentalists have long opposed – connecting a patchwork of 1960s fuel breaks, mountain roads and heat-absorbing avocado orchards to create a continuous (in Peterson’s words, “big-ass”) fuel break along the “front country” from Montecito to Goleta.

“It’s my people out there who are putting their lives on the line,” Peterson said. “I feel like I’m duty-bound to scream and yell. We have to be able to sacrifice a little bit of this chaparral – that we all love, that I grew up in, that I love the smell of, that I loved to roll around in – in order to save the rest of it.

“We should start looking at these things not as an ugly scar in the hills, but as a battlement, much as people in medieval times looked at walls against the invading hordes. That’s really what we’re dealing with.” 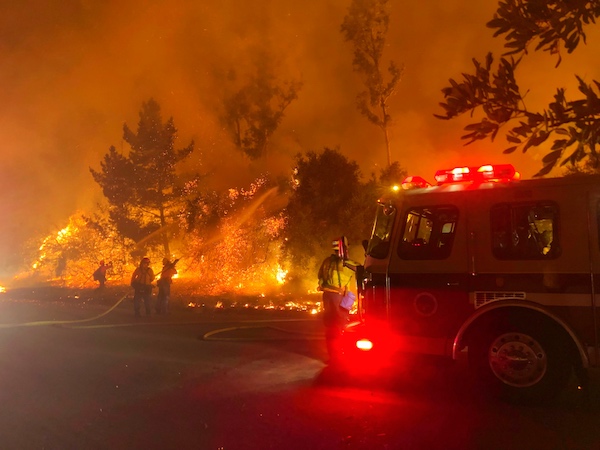 In sundowner winds on July 6, the Holiday Fire burned 20 structures, including 13 homes, in the area of North Fairview Avenue, near the boundary with the Los Padres National Forest. (Photo: Mike Eliason, Santa Barbara County Fire Department)

“Grinding up the vegetation”

The impact of the Holiday Fire fuel break is starkly obvious at a glance. On one side of it, perilously close to a hilltop estate, the ground is charred and stripped bare; on the other side, the landscape is green and brushy.

During sundowner winds of 40 miles per hour, the fire destroyed 24 structures, including 10 homes. Three additional homes were damaged. But the fuel break prevented the blaze from moving upslope into the national forest overnight, Peterson said. In typical sundowner fashion, it could have roared back down into the urban area the next day.

“We need more fuel breaks that can take some of the heat out of these fires and give us opportunities to fight them,” Peterson said.

But if Peterson is adamant in his support for such large-scale projects, Rick Halsey, director of the California Chaparral Institute, an Escondido-based research group, is an equally determined opponent of what he calls “grinding up the vegetation” to fight fires.

“We have to look at how we protect lives and property, not how we stop wildfires,” he said. “The problem is, we keep doing the same thing, over and over again.”

Halsey grew up on More Mesa, became a biologist, spent a stint as a firefighter, and has lectured about fire risk reduction at the Santa Barbara Museum of Natural History. He believes it is more effective for residents to thin the vegetation right around their homes than it is to create fuel breaks miles away from them.

“How about trying to prevent the fire in the first place?” Halsey said. “I think everybody wants the same thing. It’s crazy we don’t sit down and figure out how to do it.”

According to Los Padres Forest Watch, a Santa Barbara-based preservationist group, the Thomas Fire of December, 2017, jumped a network of 70 miles of fuel breaks in the national forest around Ojai and Lake Casitas on its way to becoming the largest fire in California history.

Last year, Forest Watch and the Chaparral Institute filed a lawsuit against the U.S. Forest Service over its plans to create a fuel break six miles long and up to 300 feet wide along the crest of the Santa Ynez Mountains on the Gaviota coast, effectively widening an old dirt road. The groups said the $150,000 project would destroy Refugio manzanita, a rare species found only in the Santa Ynez Mountains. 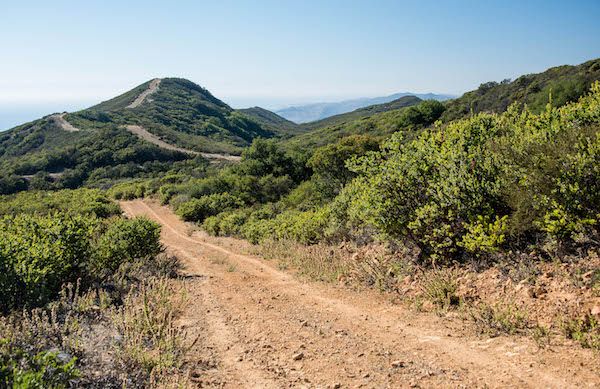 Two environmental groups sued the U.S. Forest Service over a proposal to widen this old road as a fuel break for six miles along the crest of the Santa Ynez Mountains on the Gaviota coast. The opponents argued that it would destroy swaths of rare Refugio manzanita, shown here. The Forest Service canceled its plans last year (Photo by Rick Halsey)

The Forest Service eventually dropped its plans for Gaviota. But the agency is proposing to reestablish 24 miles of old fuel breaks in Monterey County, saying the project would protect several small communities, including Big Sur.

This spring, Halsey and representatives of Forest Watch, the Santa Barbara Urban Creeks Council, Sierra Club California and 15 other environmentalist groups sent a letter to Gov. Jerry Brown, urging him to shift tens millions of dollars in state funding slated for controlled burns and thinning out dead trees to tax rebates for fire-proofing homes.

“What we have been doing, trying to control the natural environment, is not working,” the groups wrote on May 16, pointing to last year’s devastating fire season, in which 45 lives were lost and 10,000 structures burned, including 12 in Montecito.

“We must look at the problem from the house outward, rather than from the wildland in,” the letter to Brown stated, “… it will require a significant change in thinking.” 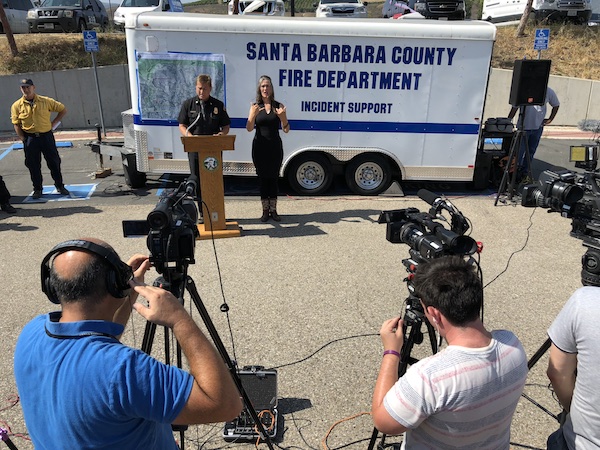 On July 12, within days of the Holiday Fire, state and local fire officials outlined a dire scenario for California at an informational hearing on natural disaster response, convened at the Montecito Union School by state Assemblywoman Monique Limón and state Senator Hannah-Beth Jackson, both Democrats from Santa Barbara.

In the shadow of the Thomas Fire, which triggered the catastrophic debris flow in Montecito on Jan. 9, killing 23, the mood in the school auditorium was somber.

“Climate change is changing the fire environment,” Tom Porter, chief of Cal Fire for Southern California, told an audience of about 75 people. He dismissed the term “new normal,” saying, “This is the normal.” There had been more fires in the past five years, Porter said, more than during any other five-year period in state history. Eight of California’s 20 most destructive fires have occurred in the past four years.

“Every acre can and will burn at some point,” Porter said.

Peterson spoke next, praising a new program that provides state funding for local agencies to strategically “pre-position” resources during the kind of hot, dry, windy Red Flag Warning weather that these days is virtually guaranteed to “pop a fire.” Two hours before the Holiday Fire, Peterson said, five extra fire trucks were staged at the corner of Hollister Avenue and Turnpike Road, allowing firefighters to respond more quickly when the blaze began.

“They were at work within minutes,” Peterson said. “That is an example of being nimble. It was extremely encouraging.”

But Peterson said there was “no time” for longer-term prevention measures during what is now a year-round fire season. Again, he made his pitch for a fuel break that would “connect the dots in the front country.”

“We’re always on fire, it seems like,” Peterson said. “The interval between these large catastrophic events is decreasing. We need to adapt to that. This is not a hump we’re going to get over. It’s not going to get better. We need a countywide fuel management working group, and we need to get a plan together.”

As the hearing drew to a close, Limón and Jackson highlighted a spate of bills that they have introduced in the state Legislature, including bills that would automatically enroll residents into county emergency alert systems; translate emergency communications into languages other than English; require insurance companies to cover losses from mudslides and debris flows triggered by wildfires, and bring together federal, state and local agencies to collaborate on forest management.

Another bill proposed by Limón would create a working group of representatives from state agencies, local government, academia, industry and non-profit groups to identify new ways to prevent fires. (Limón also introduced a bill that would have required insurers to participate in consolidated debris removal programs with homeowner consent; but it died in committee.)

“We will get through this,” Jackson assured the audience at Montecito Union. “It’s going to be tough, but heck, we’re Santa Barbara County.”

How many licks does in take

Hoot hoot, I am late, caught

Nice since I'm too big to