The Art and Science of a Prescribed Burn

It’s 8 a.m. on Wednesday, May 26, and 50 or so firefighters in navy-blue dress-downs are gathered in a small clearing on the Chamberlin Ranch just outside Los Olivos. They sip coffee and chat about their kids and the Dodgers as a pair of magpies hop and squawk along nearby fence posts.

There’s a light fog in the air and barely a breeze. Afternoon temperatures won’t get above 75 degrees. Perfect conditions to start a few fires. 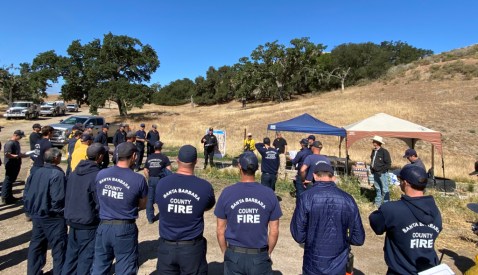 NEAR AND FAR: Firefighters from 13 different California agencies came to Santa Barbara to learn from our experts in wildland containment techniques. | Photo by Mike Eliason

The circle of men and women draws tighter as Anthony Stornetta, a Santa Barbara County Fire Department battalion chief, starts his briefing. The purpose of the prescribed burn scheduled for that day and the next is twofold, he explains.

The first is to provide wildland training for the newest members of regional crews, including those from Montecito and Paso Robles, as well as more urban departments in Fresno and San Diego. Because if there’s anything California firefighters have learned in recent years, it’s that it doesn’t really matter where you’re stationed — when the next hellstorm hits, you go where you’re needed.

But what crews who typically respond to structure fires might not know is that a brush fire can move 16 times faster on a slope compared to flat ground, Stornetta says. Or that grass just a couple of feet high can spit out six-foot flames that are capable of engulfing a field faster than any person can run. “That’s not survivable,” he says, and that’s why learning how and when to escape in the backcountry is critical. “This is real-life stuff.”

The second objective, Stornetta goes on, is to use the series of carefully planned, intentionally set fires — 80 contiguous acres in all — to burn off deadened brush and downed tinder on the property. Removing the excess fuel will offer some protection to the Chamberlins and their neighbors in the event of an actual wildfire, as well as provide a bit of “range improvement,” meaning converting sage and chamise back to natural vegetation for better cattle grazing. Stornetta thanks Russell Chamberlin, who is standing to his side, for partnering with the county on the operation. Chamberlin waves at the firefighters, and they nod back.

Stornetta finishes his briefing by dividing the trainees into “firing teams” armed with drip torches and “holding forces” responsible for maintaining tight grids with hand tools and water-filled backpacks. Contingency plans are discussed for if the flames should jump the line. Helicopters are on standby. And a representative of the county’s Air Pollution Control District is at the scene to make sure Los Olivos isn’t unintentionally smoked out.

As the crews throw on their gear and load into trucks, Stornetta runs through his checklist one last time. It’s hardly his first rodeo, but he still gets butterflies. Months of planning and preparation went into the burn, including the installation of weather stations to track wind patterns and fuel humidity. Stornetta himself was in the field until 8 p.m. the night before, watching the wind. “It’s all about minimizing risk,” he says. “If you’re not nervous, you’re overconfident.”

Using prescribed burns as buffers against extreme wildfires is nothing new for Santa Barbara and the state. Indigenous tribes have done it for centuries. But the strategy had flagged in recent years. Whereas Cal Fire used to clear out 65,000 acres annually in the 1980s, it slowed down to less than 10,000 by 2015.

After a string of deadly, record-breaking conflagrations in 2017 and 2018, however — including the Thomas, Carr, and Camp fires — California’s legislature took major steps toward beefing up its prescribed burn regime. The state now strips nearly 125,000 acres a year, aided by Gov. Gavin Newsom’s $1 billion wildfire budget, with $65 million earmarked for increasing the rate of controlled burns. Stornetta pointed specifically to the Carr Fire as an incident that needn’t have become so disastrous if the buildup of fuel in the area had been better managed. 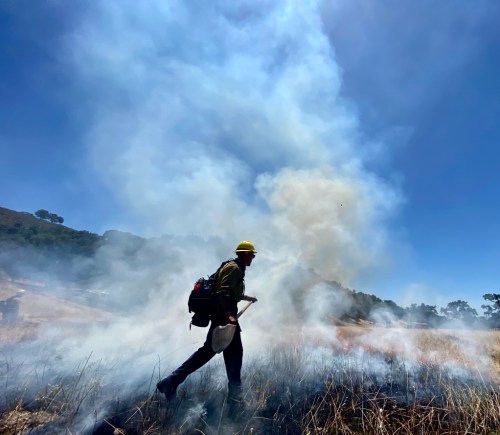 BULL BY THE HORNS: California recently launched a “burn boss” certification program for private ranchers to conduct their own prescribed burns. The first class was conducted in Eureka in May, and Santa Barbara will host its own in the near future. | Photo by Mike Eliason

New laws are helping, too. Senate Bill 1260, authored by Santa Barbara’s former state senator Hannah-Beth Jackson, requires Cal Fire to cooperate on prescribed burns with landowners. It also instructed the agency to create a program for the pre-certification of “burn bosses,” private ranchers who direct operations at prescribed fires on their properties or others’.

Chamberlin cousin Mary Heyden watches as the line of trucks rumbles to its first location while a lookout vehicle takes position on the ridgeline above. Even though Heyden isn’t necessarily ready to become a burn boss herself, she likes the idea and hopes others in Santa Barbara County opt into the fledgling program. “I think it’s a win-win,” she says.

Heyden is grateful for County Fire’s efforts to eradicate some of the tinderboxes on her property. Motioning to a nearby dry expanse, she snaps her fingers. “It can go up like that.” She also points to a semi-blackened hillside that had been choked by thick chaparral until it was cleared away in a previous controlled burn. It’s now dotted with shoots of green that her cattle will one day eat.

But what’s most important to Heyden and her family is the knowledge that Wednesday’s small fires will hedge against future disaster. “Seeing all those fires and knowing it could happen here — we just want our neighbors to be safe,” she says. Still, Heyden goes on, squinting beneath her wide-brimmed felt hat as a fireman drops flames onto the ground, “It’s just really weird to see someone intentionally set fire to your property.”

The day’s seven instructors are busy showing their teams how to wield the drip cans, where to stand, and why constant vigilance over even slight changes in wind direction is so important. They piecemeal the field in a grid to keep the flames from gathering a head of steam. Chainsaws lop off low-hanging oak branches so the fire can skirt underneath without taking the whole tree down. 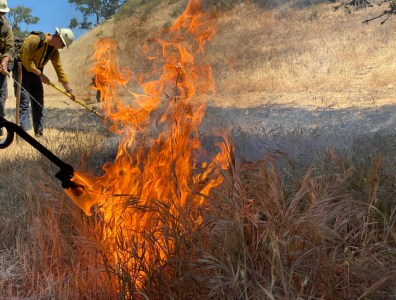 TOOLS OF THE TRADE: Trainees use drip torches filled with a mixture of gasoline and diesel to burn sections of a dry and overgrown field. | Photo by Mike Eliason

Spotters are stationed every few feet with their backs to the action, watching the landscape for any hint of stray embers. Like the rattlesnakes they must constantly mind, they’re calm but ready to pounce.

While County Fire conducts three to four prescribed burns a year, Stornetta says, it only offers the one annual certification. It can be a hard class to get, and it fills up quickly. The Chamberlin Ranch has proved the ideal training ground, he explains, because its existing roads make access easy and provide natural breaks. The undulating saddles of terrain provide realistic containment challenges.

By the end of the two days, each firefighter will be graded on their “knowledge of the job,” “attitude,” “initiative,” “decisions under stress,” and other rating factors.

“This is our bread and butter,” Stornetta says of fighting rural fires and the teachers who show others how to do it. “So we’re good at it.”

BYZ - "I struggle with the

A home in a single family

And it’s only going to get

Around the September equinox,

Definitely leaning to the

Yet another whatabout. Do

WOW! Thanks for sharing!

It’s telling that neither

Aw man, that sucks to hear. I