Today marks the 95th anniversary of the June 29, 1925 earthquake. Though it is best known for bringing about the architecture and planning awareness that made Santa Barbara famous I find it to be an amazing story of a community coming together in time of great disaster and taking care of its own with little outside assistance.

For more years than I care to count I’ve been searching newspapers, magazines, books, diaries and conducting personal interviews to get the real story of what happened not only that day, but the days that followed.

I thought it might be interesting to present pieces of the earthquake saga as it happened over the first three days. All of this is cut from my manuscript “The Great Santa Barbara Earthquake – The Disaster that Built a City.”

At 3:27 a.m. a slight earthquake rolled through the town.  Though not strong enough to wake the citizenry, its presence was noted by the jarring of the needle used to record the temperature at the Southern Counties Gas Co. and on pressure gauge monitors at the city water works.

The sun rose at 4:49 and began the chore of slowly burning off the summer morning fog.  The first to arise were farmers, some of whom said later they noticed their "animals were acting strange". By 6:42 most of Santa Barbara was up and getting ready for a normal Monday. The great excitement that loomed ahead was the upcoming Fourth of July weekend. In sixty seconds, all of that would change.

At 6:43 the city, rocked, rolled, groaned and crashed for 19 seconds. “It sounded like a million dogs crunching bones.” – Ole Hanson. Over the next twenty minutes, four strong aftershocks followed each about 10 to 12 seconds long. 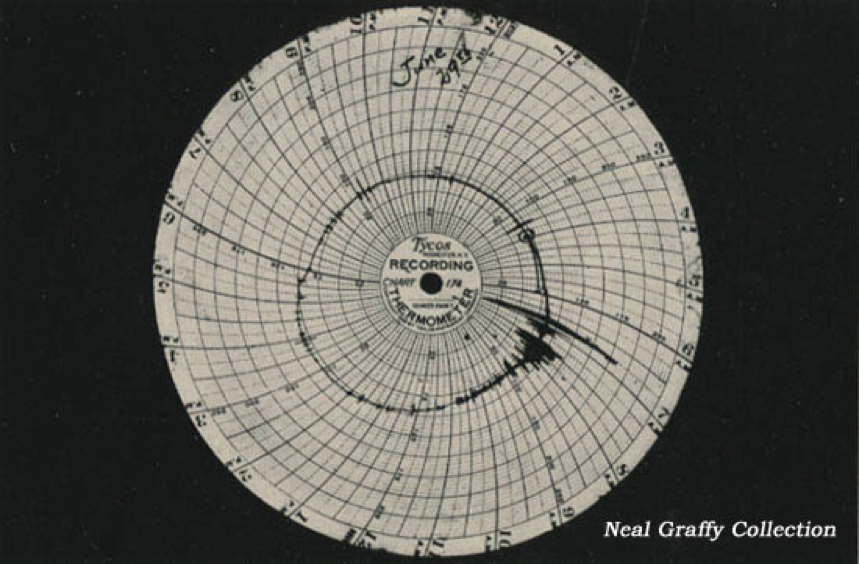 The temperature recording from the Southern Counties Gas Co. Note the little shake at 3:27, the big hit at 6:43 and the aftershocks throughout the day.

The earthquake that struck Santa Barbara was estimated at 6.3 on the Richter scale, “estimated” being the key word as the appearance of Dr. Charles Richter’s “Magnitude Scale” was still a decade away. It is believed the quake was centered in the channel along a portion of the Mesa Fault. It triggered a second temblor when it met the More Ranch Fault under the present site of La Cumbre Plaza.

In our modern world, where even the simplest task seems to require meetings, studies, arguing and lawsuits (and this is when everyone agrees) it is unbelievable how quickly and how well organized the community response was.  It was almost as if a symphony recruited itself, and with no auditions, rehearsals, or conductor just showed up and started playing.

Damage to most houses was slight and once family safety was assured, everyone headed downtown. 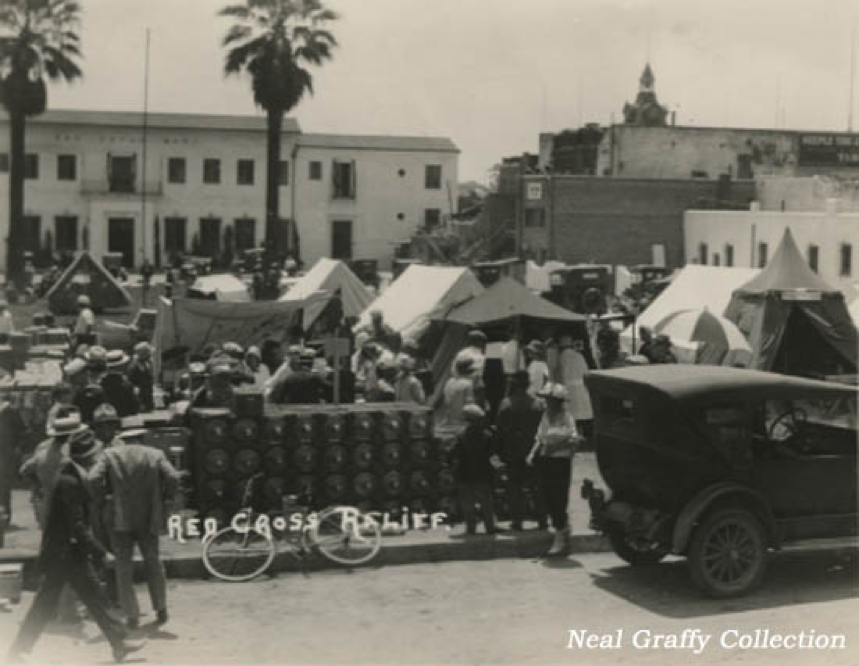 By 8:00 the Red Cross had their first station set up and ready at De la Guerra Plaza. A second station was on the lawn of the library along Anapamu street and a third at Vera Cruz Park. Coffee, donuts, and water were distributed. Nestled between City Hall and the Daily News building, De la Guerra Plaza became the command center. Other tents housed City Manager Herbert Nunn, the chief of police, the American Legion and the Chamber of Commerce (pointed tent at right) and eventually banks, military personal and even the Automobile Club of Southern California. 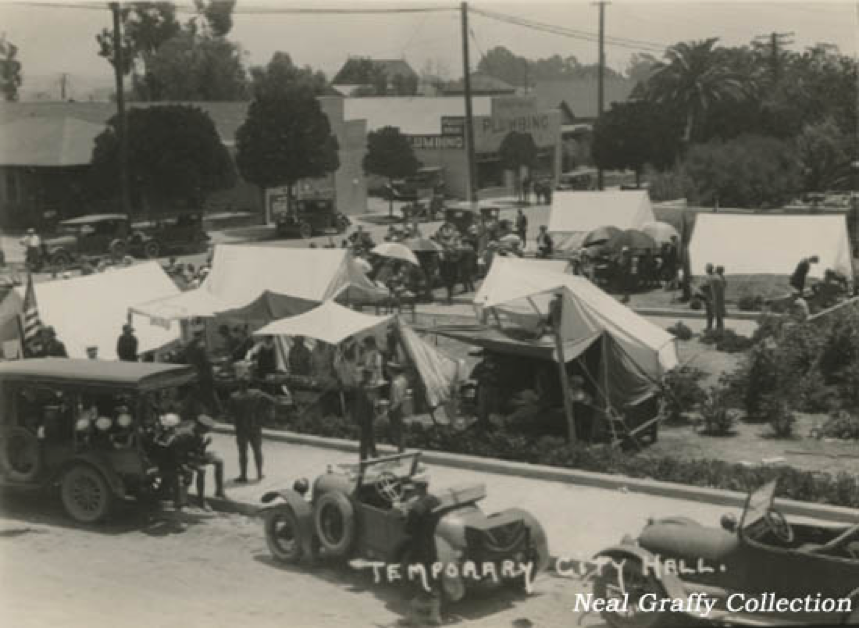 Though the two-year old city hall building seemed safe, a temporary tent city of public services opened on the front lawn. By 9:00 a.m. all city department heads had reported for duty. 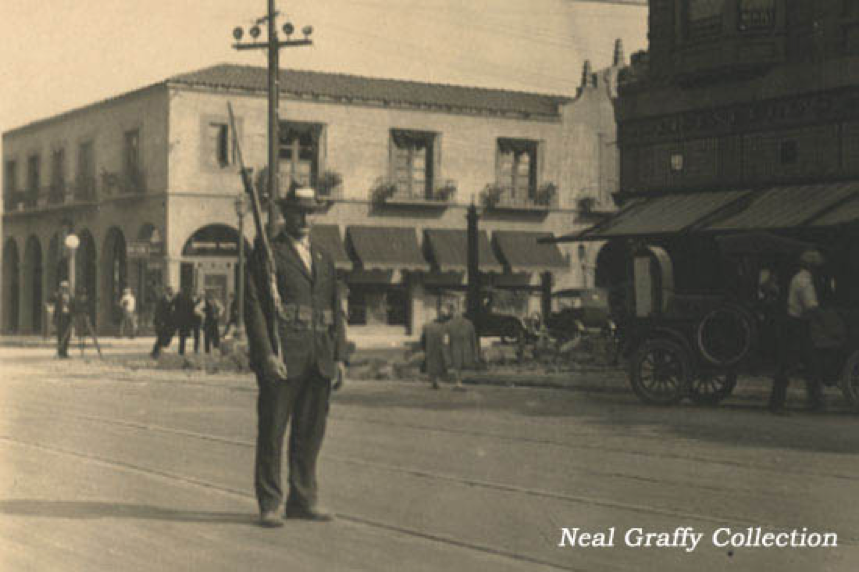 Police Chief Lester Desgrandchamp could count on an active force of 25 men and 20 reserve officers consisting of commissioned citizens (including a number of doctors all now occupied with other matters). He need not have been worried about his small band, the symphony was already tuning up.

Henry L. Ewald, a lino-type operator for the Daily News, was the Commander of the Santa Barbara Post of the American Legion.  As he made his way downtown, he began encountering other legionnaires.  Assembling a quick Committee of Three – Robert Blachford, E. L. Spencer, and Jess Culbert - as his aides, in a relatively short time the American Legion had nearly 100 men along State Street and the downtown, patrolling, and clearing debris searching for victims. Veterans of WW I responded in uniform (and armed!) to guard buildings. The Santa Barbara Naval Reserves provided another eighty uniformed men and officers under the command of Lt. Commander Harvey Kiler and Lt. Commander Sampson.  Meanwhile Chief Degrandschamp commissioned 150 volunteer citizens. Within hours Santa Barbara had a home guard of close to 400.

The Boy Scouts acted as messengers between the front lines and plaza headquarters and also brought refreshments from the Red Cross Canteens to the hundreds of volunteers searching through the rubble and patrolling the streets. The scout’s neckerchief was the silent pass that allowed them through any checkpoints. 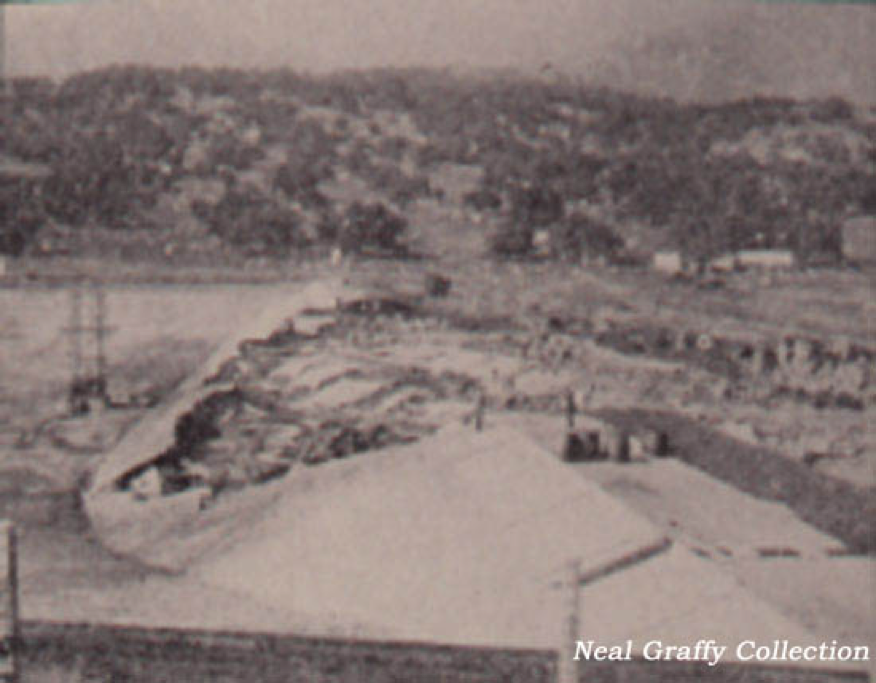 Sheffield Dam had collapsed sending 45,000,000 gallons of water down Sycamore Canyon and through the lower East Side. Fatalities from the wall of water were bovine in nature as several cows unsuccessfully took the white water ride out of the canyon.

However, water was flowing without problem from Gibraltar Dam to the city through the Mission Tunnel. Pipes had broken in the city so the main water valve was temporarily shut off to prevent flooding. By 9:30 a.m. all breaks had been found and by-passed and water pressure stood at 125 lbs. 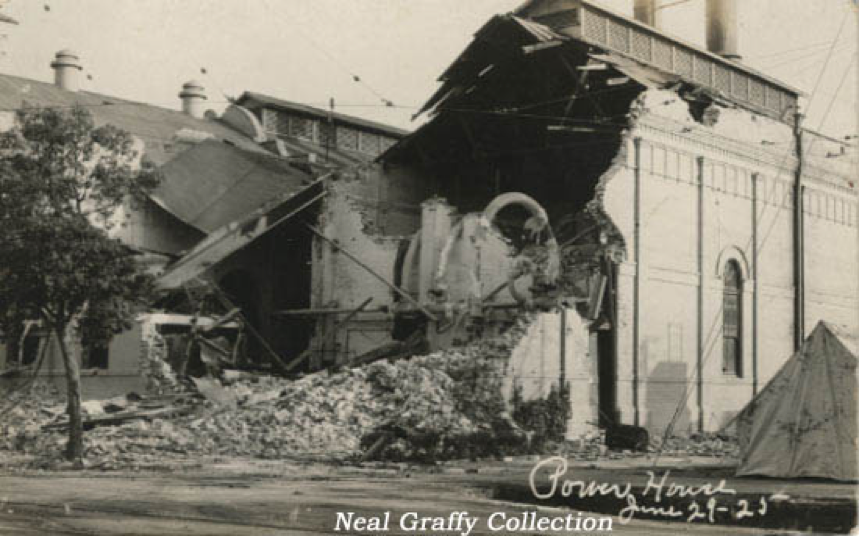 Unlike San Francisco (1906) and Yokohama, Japan (1923) where fire did more damage than the quake, Santa Barbara was saved from that fate by the quick thinking and bravery of two men. At the Southern California Edison powerhouse on Castillo (in what is now Pershing Park) William Engle, the night operator, dashed through the collapsing building (shown above) to get to the switches to cut off all power to the city. A similar scene was played out at the southwest corner of Montecito and Quarantina streets, home of the Southern Counties Gas Co.  Henry Ketz, the night engineer, somehow managed to find his way through the plant to turn off the main emergency valve.  Both were proclaimed heroes and given recognition and rewards.

Actually there was a third hero who was over-looked in all the excitement. William Pfleging, was an engineer at the gas plant who coincidentally lived a few doors below Ketz at 512 Brinkerhoff.  He was in the process of making gas when the quake hit.  He quickly vented the gas, filled the pipes with cold air, shut off the pilot and left the building.  Outside in the yard, the water tanks were swaying so violently they were throwing water 100 feet.  Pfleging reached the valves that shut off the gas to the city and closed them.

An earthquake without a fire was a blessing not only to the town, but to engineers and seismologists. For the first time they were able to study the full effect of a strong earthquake on the many types of building materials, styles and construction. 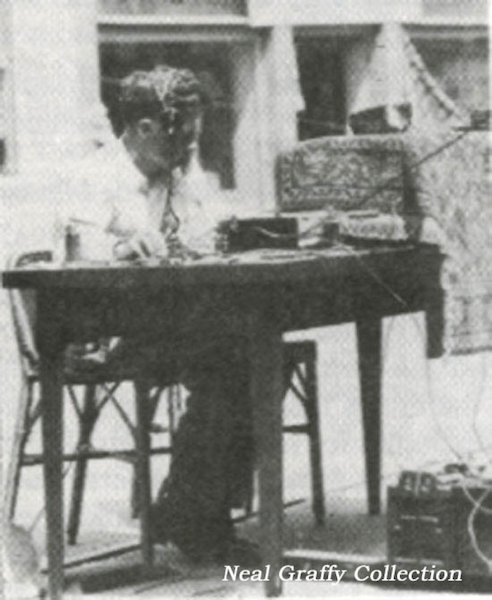 There was no communication with the outside world. Telegraph and phone wires were down, electricity was off, radios inoperable. Rumors were flying as to how far and how severe the damage was - Ventura in flames, Los Angeles destroyed, San Francisco gone.

In what probably constitutes the first and heretofore unacknowledged act of looting, two amateur ham radio operators, nineteen-year old Brandy Wentworth (above) and his friend Graham George spied a brand new RCA Victor Super-Heterodyne Radio, complete with batteries, in the window of a nearby store, Bolton & Jones (819-821 State St.)  They removed the radio and set up shop in the middle of the street.  For an antenna, they ran copper wire to a nearby pole (no easy task considering the number of aftershocks) and soon were listening to a few Los Angeles stations with news and music as normal. But they did hear two ships in the channel, one saying it had “felt a tidal wave and seen the cliffs crumbling along the Santa Barbara shore”.

Quickly raiding the home of another ham friend, Bennie Lopez who was out of town, they set up a primitive broadcasting set and sent out an SOS which was picked up by a passing oil tanker. The tanker passed the message along and it was picked up by a salvage tug, the Peacock. The tug replied it would head to Santa Barbara and tie up at Stearns Wharf to provide better radio communication.  It was now 7:30 a.m., only forty-seven minutes since the quake had struck.

The Peacock arrived early in the afternoon and at 2:12 p.m. broadcast the following message from Mayor C.M. Andrea "for all ships and station."

"Santa Barbara suffered from severe earthquake shock that started at 6:40 a.m. and lasted intermittently for about two hours.  The principle damage is State Street, the main business street, where almost every business block is damaged.

"There is probably some loss of life, but small.  One or more people were reported killed by buildings falling on State Street and it is reported that one or two are in the ruins of the San Marcos Building.

"The main water supply at Gibraltar Dam is believed intact, though the Sheffield reservoir in the city went out.  The city is well policed by the local force, the Naval Reserves and the American Legion.  The Red Cross is in active charge and has established headquarters at several points and is ready to care and feed for the needy.  No call is sent out for help, as it is believed the city is able to care for itself.

"The property loss is very large, but the city will rebuild bigger and better than before.

No Masks? Maybe it was one