Reina del Mar Parlor No. 126, Native Daughters of the Golden West, has selected its member Teresa Kuskey Nowak to portray Saint Barbara, the city’s patron saint, during the 2020 re-imagined Old Spanish Days Fiesta.  She was introduced to the public at Mission Historical Park in Santa Barbara on June 25.  Each year of Fiesta since 1926 Reina del Mar Parlor has chosen one of its members to represent our patron saint.  The parlor was founded in 1901.

Teresa Kuskey Nowak was born on a U.S. Army base in Heidelberg, Germany, while her father was a captain in the Army and her mother taught at the American school.  Her parents had been Santa Barbara residents before Captain Kuskey was stationed overseas.  Teresa attended Montessori and Vieja Valley grade schools, San Roque School for middle school, Bishop Garcia Diego High School, and U.C.S.B.  She has been a professional ballet dancer, a ballet teacher, an event planner, and is director of the award-winning La Boheme Professional Dance and Entertainment Group. 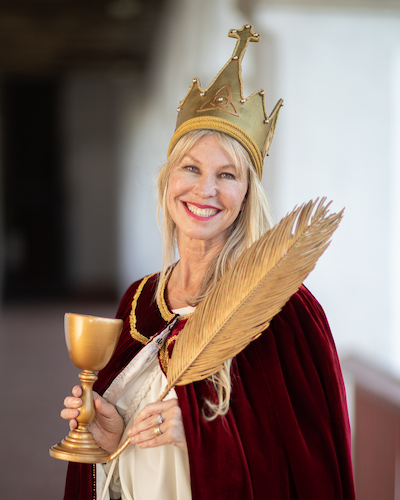 She is a third generation Santa Barbara native.  Her late father was Dr. Garvan Kuskey, a local dentist, and her mother is Mariana Teresa Summerhill Kuskey.  Teresa’s aunt is professional photographer Priscilla, who is a former Saint Barbara and a past president of Reina del Mar Parlor.  Dr. Kuskey’s mother, Mary Agnes O’Shea Kuskey, was born in Santa Barbara.  Teresa Kuskey Nowak is married to Raymond Nowak and they have six children.  A member of the parlor for five years, the new Saint Barbara is chairman of the Veterans Welfare Committee, representing the parlor at patriotic commemorations and collecting items for veterans’ centers.   She has also assisted with the parlor’s civic and social events.  Teresa has performed for Fiesta and has danced with Las Fiesteras and Baile de California groups.  She has participated in numerous local patriotic events, parades, Special Olympics, and fund raisers.

Among the awards Teresa Kuskey Nowak has received are Local Hero from the Santa Barbara Independent, an Apogee award for her education work through dance, and a 2020 finalist award by the Women’s Economic Ventures Spirit of Entrepreneurship.

The 2020 Saint Barbara was inspired by her father’s civic and preservation activities with the Presidio State Historic Park.  Dr. Kuskey was a past president and a longtime board member of the Santa Barbara Trust for Historic Preservation, which operates the Park.  Teresa has fond memories of youthful adventures with archaeological digs, painting parts of the interior of the reconstructed Chapel, and attending celebrations.  She says “I grew up watching a man who continually gave to his community, often anonymously.  His influence is why I give my all to community events.  I am proud of my town and community.  It is a complete honor to represent Saint Barbara.  I know he would have been beaming with pride.  And I do feel he will be on this journey with me.  I dedicate my St. Barbara reign in his honor and in honor of all those who work passionately in their communities preserving history with kindness, leadership, and honor.  I cannot think of a better time to show community love and support than in troubled times.”

For Fiesta events Saint Barbara Teresa Kuskey Nowak will be dressed in the saint’s traditional white gown and scarlet cape, and will wear a golden crown.  She will carry the martyr’s palm frond and a golden chalice.  For social events she will wear an ivory Spanish-style floor-length dress and a mantilla.

The Santa Barbara Channel was named for Saint Barbara during the Viscaino expedition in late 1602.  In the eighteenth century the royal Spanish presidio fortress (1782) and Mission Santa Barbara (1786) were named in her honor.  She is the patroness of protection from lightning and calamity, and is revered by artillerymen, mariners, and architects.

The Native Daughters of the Golden West is a statewide organization of women founded in 1886.  It has a long history of involvement with contributions to historic preservation, veterans’ welfare, conservation, California mission restoration, the N.D.G.W. Children’s Foundation charity, patriotic activities, and college scholarships.  Reina del Mar Parlor No. 126 was chartered in Santa Barbara on April 20, 1901.  It is well known for its Old Spanish Days Fiesta activities, child welfare work, over one hundred years of mission preservation, plaque dedications at historic buildings, veterans’ welfare, and civic participation.

Dr. Kuskey was my dentist for a time, and my mom used to work for him. He was a good guy. Congrats!

So perfect, beautiful and "about time"--this is the optimal selection for someone who models, like so many other women before her, the virtues attributed to Santa Barbara, not only symbolic-- especially at this time when she will have to be creative without normal Fiesta events. I hope Dative Daughters rises to the occasion to highlight her reign with with unique ways to offer and illuminate all the roles Theresa and others play. Her work with Special Olympics, and Veterans, and as a entrepreneur like previous St. Barbaras reflects how Women before her have truly shaped our City as leaders, Moms (6) and just loving kind people always reaching out. Maybe she should reign one more year to offset the reduction of meaningful events and add to provide us more moments for celebration!

Public Health Officials Urge Residents to Get a Flu Shot

Work for the BOS: it's not

Lost my vote with this

Seriously, she and Orlando

We live in the city of Santa