The evening sky of Wednesday, April 15 was temperate, clear, dark, and steady. Conditions were great for a leisurely telescopic stroll through the mid-April sky.

Closest to us was the planet Venus, the bright beacon in the western sky as the Sunsets. It was just under 50 million miles away, and since it is currently between us and the Sun, it appears as a fat crescent, with the side facing away from us getting most of the light. Here's an enlargement showing the current phase. You can see that there was still some turbulence in our upper atmosphere distorting the image. 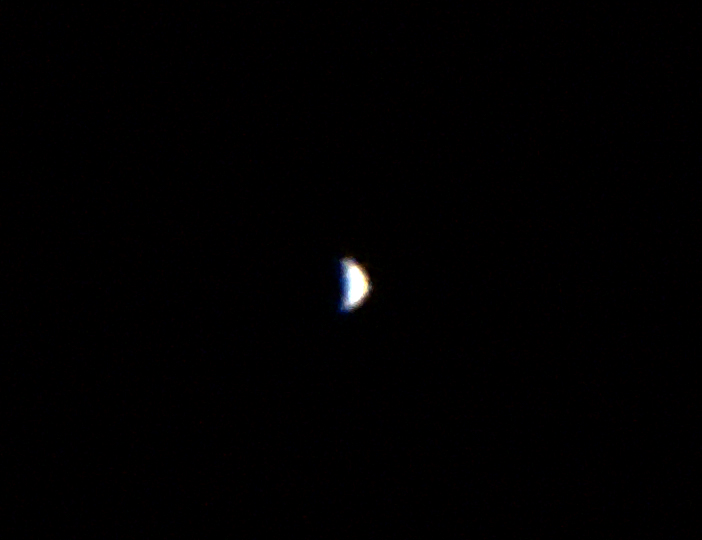 Venus is roughly the same size as Earth, and is highly reflective because its atmosphere is topped by thick clouds, which hide surface features from view in visible light. With its dense atmosphere of carbon dioxide, a potent greenhouse gas, the entire surface of Venus is at an average temperature of 864 degrees Fahrenheit. Some surface features, thought to be volcanos, are detectable in amateur instruments equipped with infrared detectors.

Watch Venus over the next month as it continues to swing around the Sun. You will see the crescent getting taller and thinner, but its brightness will increase because it will be getting closer to us.

Next, at a distance of about 92 million miles, was comet C/2019 Y4 ATLAS, which we visited last month. Alas, despite hopes that it would make a dramatic naked-eye sight as it approached perihelion, it has broken apart under the stresses of solar heating, and dropped to about a sixth of its brightness in March. You can see in the image below that the nucleus appears linear, and images from larger scopes show a train of fragments there. 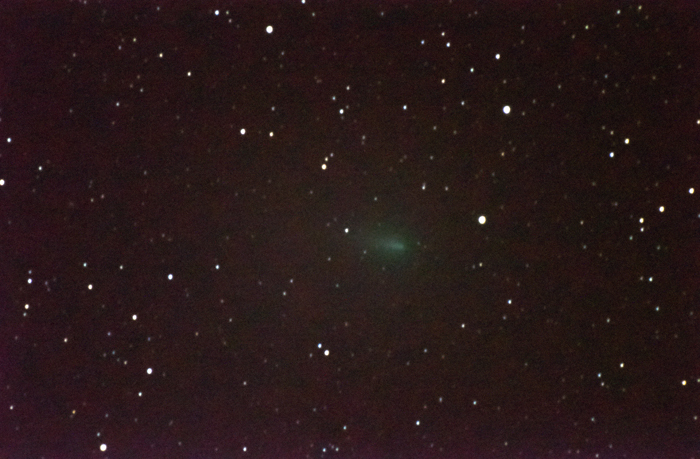 Faring a little better is comet C/2017 T2 PANSTARRS, also visited last month. It was about 162 million miles away, still heading in. It hasn't changed appreciably in brightness, but better sky conditions for this photo showed a little more of its fan-shaped tail. 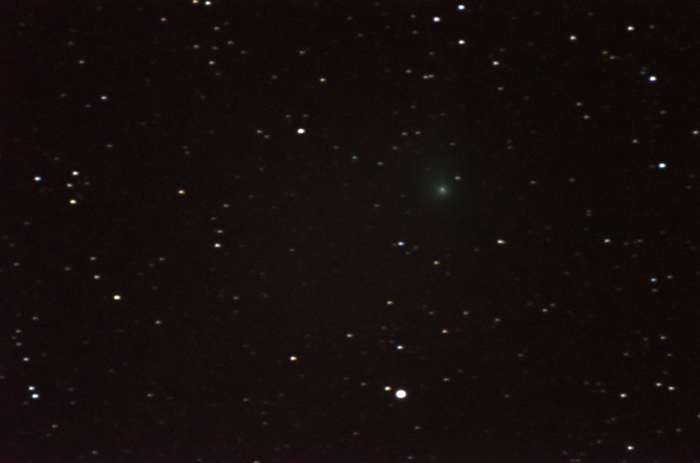 There's another potentially bright comet on the way for May, though right now only visible from the Southern Hemisphere. This is C/2020 F8 SWAN, discovered on March 25 in ultraviolet emission from outgassing hydrogen by the SWAN instrument (Solar Wind Anisotropies) on the SOHO spacecraft (Solar Heliospheric Observer). Then again, it may fizzle, too. Stay tuned!

The winter constellation Orion was low in the west, seemingly standing on the horizon. The bright orange star Betelgeuse in his shoulder made news in the last few months because it had suddenly dimmed down to less than half of its normal brightness. We know that Betelgeuse is a massive red supergiant star that is nearing its inevitable death as a core-collapse supernova. Everyone was hoping that the dimming was a prelude to the explosion, and we would experience something like this image, bright enough to see in the daytime and cast shadows at night. 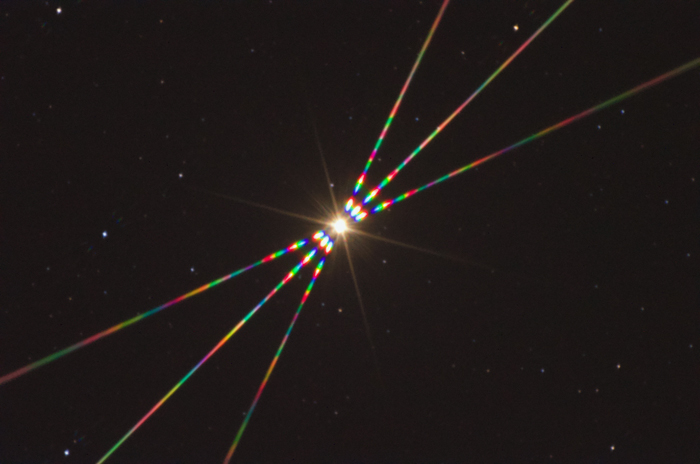 OK, that's not really a supernova image. I just left the focusing mask on the telescope when taking the photo. Those rainbow streaks are diffraction spikes caused by a pattern of lines engraved on a clear plastic focusing aid known as a Bahtinov mask. When you see the spikes in a symmetrical pattern, you are in focus, a demonstration of photons behaving like waves. Here's the real Betelgeuse. 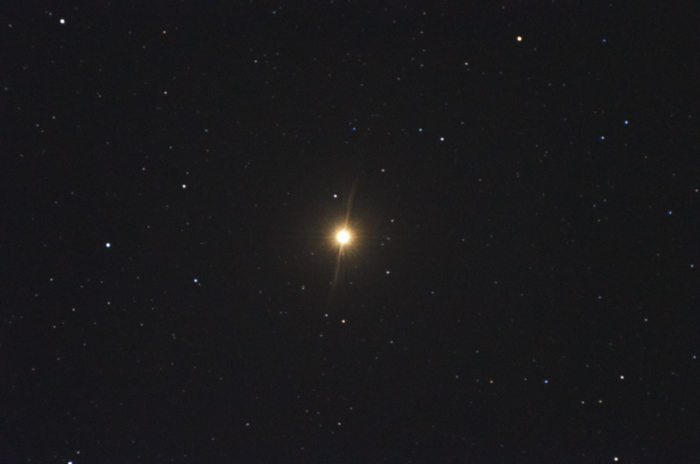 Betelgeuse did not explode, and has regained almost all of its former brightness. It never dimmed at all in infrared wavelengths, showing that the dimming was most likely caused by the ejection of a cloud of coarse dust particles from the star's cool bloated atmosphere, blocking our view in visible light until it dissipated. Betelgeuse is about 670 light years away.

One highlight of the winter sky is the Great Nebula in Orion, down in his sword. Though it was low in the sky and subject to a lot of atmospheric distortion, I couldn't resist a goodbye visit. 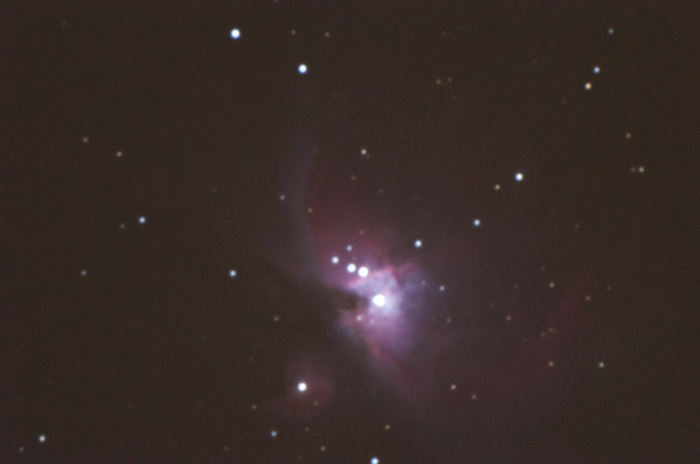 The Orion Nebula, also known as Messier 42, is about 1400 light years away. That whole area of the sky is suffused with giant molecular complexes, clouds of gas and dust that are a birthplace for new stars. The glowing pink areas are fluorescing hydrogen, energized by the powerful ultraviolet light coming from the massive young stars that have formed at its heart.

The gas and dust in the nebula will eventually get used up in making stars, with much of it blown away by strong stellar winds. The end result is something astronomers call an open cluster, a loosely gravitationally bound group of relatively young bright stars. A great example is Messier 35, in the feet of Gemini, the Twins, standing above Orion. 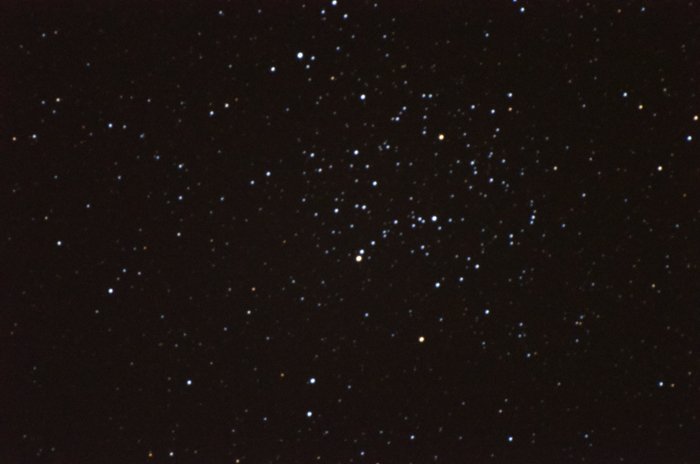 M35 is about 3500 light years away, and probably contains thousands of stars. In scale it is about the size of the Full Moon in our sky, which equates to a diameter of about 20 light years, and it is estimated to be a little less that 200 million years old.

Moving a little further afield, at a distance of about 12 million light years, are two bright galaxies in Ursa Major that are interacting gravitationally. The larger of the two is Messier 81, also known as Bode's Galaxy, a large fat-nucleus spiral. 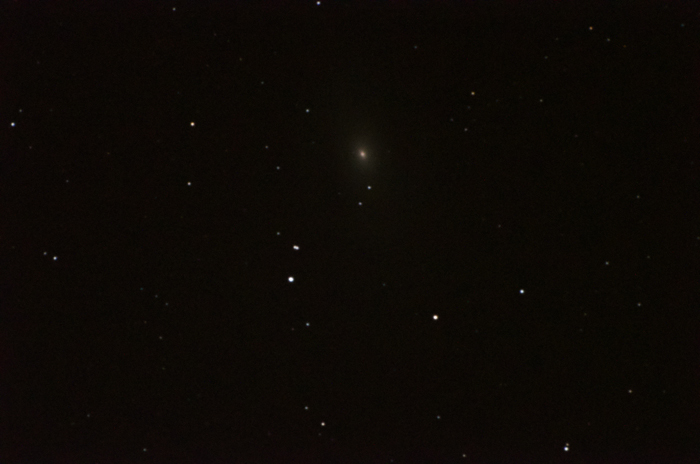 At a separation of about 300,000 light years from M81 is Messier 82, also known as the Cigar Galaxy because of its linear appearance. This is a less massive, edge-on spiral galaxy that is being tidally disrupted by M81, distorting its shape and causing bursts of star formation and supernovae. This makes M82 a noisy galaxy in infrared, radio, and X-ray wavelengths. In a couple of billion years, these two galaxies will merge. 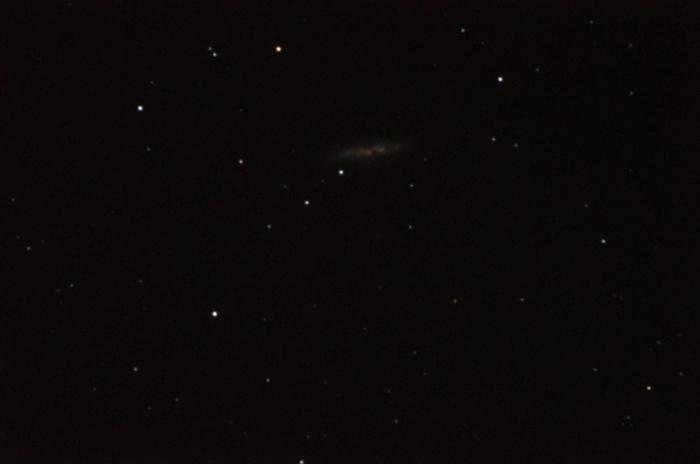 Our last stop is a more obvious example of gravitationally interacting galaxies. This is an image of Messier 51, or the Whirlpool Galaxy, and its smaller companion known as NGC 5195. 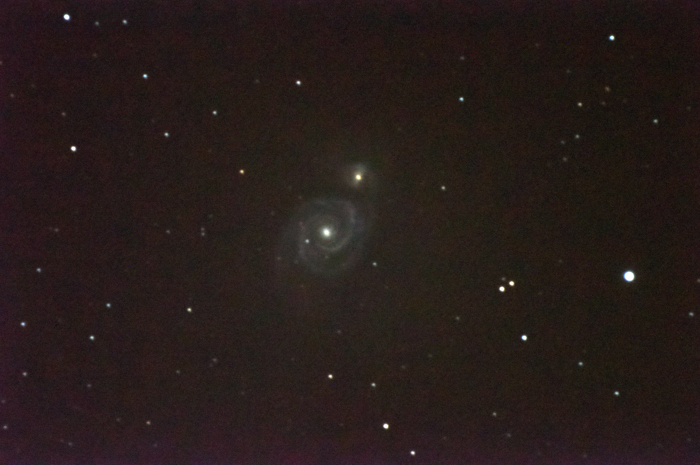 The Whirlpool is a big, beautiful, face-on spiral. It is the first galaxy in which spiral structure was detected, in 1845, by William Parsons in Ireland. At the time, he had the largest telescope in the world, with a 6-foot diameter speculum mirror, in just about the worst observing weather in the world.  You can still visit the telescope, known as the Leviathan of Parsonstown. M51 is estimated to be about 25 million light years away.

Just remember, when the walls seem to be closing in on you because of the current pandemic restrictions, you can always go out on a clear night and experience the wide-open expanse of the Universe.

I'm not much of an astrophotographer. Look up some of the great shots by dedicated photographers like Rob Gendler, Tony and Daphne Hallas, or Babak Tafreshi, and images from large professional telescopes to see what I mean. My images were quick and dirty shots with a Nikon D5100 DSLR shooting through a 130mm apochromatic refractor telescope with a native focal length of 819mm. There was also a 1.7x Barlow lens attached. The image of Venus was at 1/800 second at ISO 100. The comet images and the M51 image were Photoshop composites of 8 images at 1/30 second at ISO 3200, with a single dark frame subtracted, shot at the same settings, to eliminate hot pixels. The other images were all single shots at 1/30 and ISO 3200 with dark frame subtracted. The mount was a computerized AP400 GTO.

Show Comments
A Telescopic Stroll Through The Mid-April Sky

Ha, I recognized that Bahtinov mask pattern right away (got mine from Lonley Speck). Awesome night sky tour.

Thanks, everyone. The weather prediction right now is for clouds on Wednesday evening (04/29), but if you get a peek at the Moon with binoculars between about 8:09 PM and 10:43 PM PDT, look along the terminator (the day/night line) for the Lunar X, a set of crater rims in sunlight forming a white X in the still dark area near the terminator.

Very nice Macpuzl! Thanks for sharing.

Wow! Great photos and so much fascinating information. Thank you. Had heard Betelgeuse might be exploding, but not the follow-up.

the trippy part is betelgeuse might have exploded 670 years ago and we just dont know it yet.

Great information. Thank you for sharing your knowledge.

Thanks for the great photos and background information! I had been wondering what brilliant planet I have been seeing in the evening western sky.

SBLife: No thanks for your

Businesses that can't hack it