A Santa Barbara teenager has been arrested for DUI, vehicle theft, and other crimes from a vehicle collision on the Mesa earlier this month.

Sofia Nichole Koch, a 19-year-old nanny, turned herself in to the Santa Barbara Police Department accompanied by her attorney on Wednesday.

Initial reports state Koch allegedly took a vehicle from a gathering on May 7. Around 1:00 a.m., Santa Barbara Police responded to a collision in the 1500 Block of Cliff Drive that involved a serious injury from a moving vehicle colliding with two parked cars.

A 2020 Range Rover was traveling east on Cliff Drive at a very high rate of speed when it clipped a parked Volvo wagon then careened into a parked Scion sedan.

The velocity of the Range Rover caused the Scion to be hurled 160 feet down the road from where it was parked. The Range Rover then rolled, struck several trees and a concrete retaining wall.  The Range Rover's roof separated from the vehicle completely and was ejected down the road. The debris field spanned over 1,300 feet. 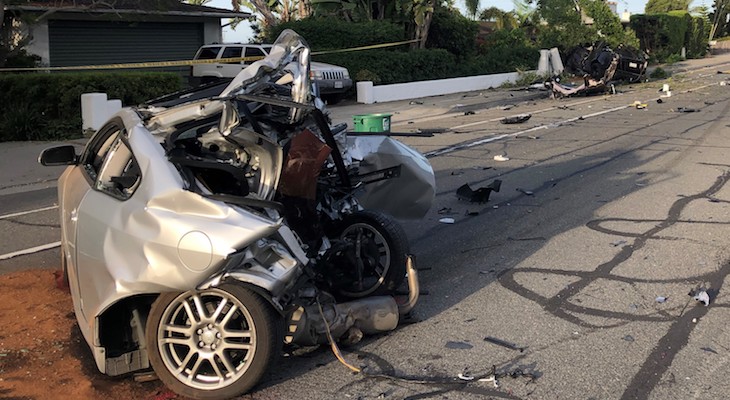 Scenes from the May 7 collision (Photo: Santa Barbara Police Department)

Koch, the driver, and her female passenger, 20-year-old Maesyn Fitzgibbons of Santa Barbara, were extricated from the Land Rover by first responders. Both sustained major injuries. They were transported by ambulance to Cottage Hospital.

Fitzgibbons sustained severe injuries including a broken sacrum, multiple breaks in the pelvis, and amputation of her left leg from the shin down. She's recovering at Santa Barbara Cottage Hospital.

A GoFund Me fundraising account has been created to raise money for Fitzgibbon's medical expenses.

Koch has been officially charged with driving under the influence and causing great bodily injury as well as excessive speed, vehicle theft/joyriding, driving without a license, and refusing to take a blood-alcohol test.

she dodged a major bullet by not killing her passenger or an innocent person on the road. i really hope she can channel tragic night and resulting lifetime of consequences into structuring her life to giving back to people less fortunate her. growing up in santa barbara makes your personal problems trivial to the rest of the world no matter how bad you might believe you have it. there's still a billion people on earth whose main concern is obtaining clean drinking water each day.

Thanks for the reply and also

A Most Distant Signal

Roger is fine, he has left

I haven’t seen Roger on here

Sorry for the double reply. I

I also heard something about

I also heard something about