Amazon is primed to set up shop in the former Saks Off 5th store at 1001 State Street with plans to grow its Alexa research team in the 46,813 square foot space. A variety of jobs are posted online looking for candidates in Santa Barbara.

Last month Invoca leased the 27,773 square foot building at 419 State Street, quite a jump from their former 14,746 square foot office at 1025 Chapala Street. Since starting in 2008, Invoca has provided artificial intelligence-powered call tracking and analytics for marketers. The tech company received $60.8 million in funding from various investors, including Santa Barbara-based Rincon Venture Partners.

“We are excited about this move for two reasons,” Dave Coburn, SVP, Finance & Operations with Invoca said. “First, with our employees working, shopping, and eating on State Street, Invoca hopes to contribute to the ‘revival’ of this area. Also, our Santa Barbara team looks forward to being able to walk to everything, including the beach and the Funk Zone.” 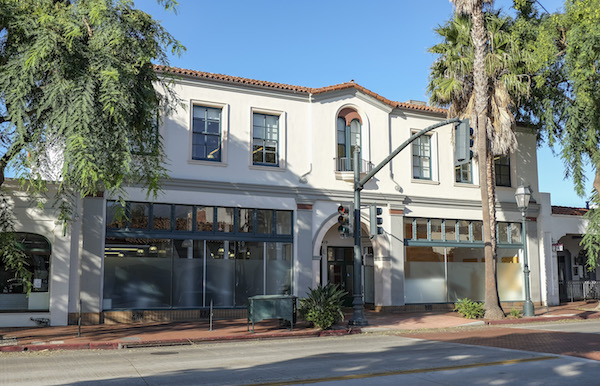 Sonos has occupied 419 State Street since 2013, but no longer needs the space as it shifts employees to other offices downtown. Invoca will sublease the building from Sonos for about a year and then commence a five-year direct lease with the property owner, reports Hayes Commercial Group.

Well Health Inc will be taking over Invoca's former space at 1025 Chapala Street, moving from their 5,708 square feet at 12 E Carrillo Street. The company provides a platform for patients to communicate with healthcare organizations in an effort to transform everyday interactions between patients and doctors. They have been headquartered in Santa Barbara since its founding in 2015.

"Well Health has already outgrown two office spaces since moving their headquarters here in late 2017,” said Caitlin McCahill Hensel with Hayes Commercial Group. "This shuffle of downtown office tenants proves that there is demand to be downtown and walkable to the amenities of State Street."

Throughout the past 15 years, tech companies have eyed downtown Santa Barbara for offices off State Street. Hayes Commercial Group reports the rents are a bit higher than other South Coast locations, but companies cite the walkability and energy of downtown as a “lifestyle benefit” for employees.

Ahh Invoca. These are the people who turn your innocent phone call to some service or supplier into years of unwanted calls, ads, junk mail and of course spam. In case you were wondering what they do... They tie phone calls to digital ads in order to allow the spammer better target more ads at the people who call. Perhaps the last thing anyone wants, well, ever... Unless of course you're a spammer. But hey, they're paying rent on State St, so its good what they do, right?

So true. And guaranteed management thinks of themselves as brave new world liberal do-gooders.

Isn't that pretty much the goal of the Internet Disrupters these days? Create a compelling app that lures you in for the sole purpose of targeting you with advertisements? The company I work for just spent the last 4 years buying up content for the sole purpose of developing targeted ads. We exist to be sold to - that is our only purpose in this Brave New World.

Getting locals back on "main street" will benefit our local businesses and add vitality to that area. Yes, there are consequences (parking etc) but there can be solutions for that. I would like to see more residential units on State along with desirable markets for locals. A live/work/shop & walkable city.

I’ve definitely seen an uptick of software engineer types walking packs and hitting the good restaurants and that’s a good thing for state street. We just need to keep up enforcement on the homeless and druggies or it’ll be a mirror image of San Francisco.

As unwanted, time-consuming and annoying as it is to people on the other end of the sale of personal information to third parties, it's a legitimate business model until law-makers stop being bought on the cheap and protect citizens, so don't hold your breath.

Honestly the only thing to

This is how a city works.

Good call to cancel this.

Face Masks Required & Pedestrians Only in 500 Block of State Street

Be aware they are still out

There is a vehicle stopped

Face Masks Required & Pedestrians Only in 500 Block of State Street

They are still looking for