The Santa Barbara County Sheriff’s Office has identified the woman who drowned in the ocean Sunday as Marcie Kjoller, 50 of Santa Barbara.

According to scanner traffic, emergency officials responded to East Beach off Cabrillo Blvd. around 10:00 a.m. for a report of a woman suffering a medical emergency while swimming in the ocean. Upon arrival, Kjoller had been pulled to the beach where bystanders were performing CPR. Medics were unable to resuscitate her.

Kjoller, a teacher at Santa Barbara Charter School, was considered one of UC Santa Barbara's top freestyle swimmers of all time.

"She was a three-time NCAA All-American and helped UCSB win four straight Big West Conference women's swimming titles. She was inducted into the Gaucho Hall of Fame in 2016," reports KEYT.

A video was published to YouTube yesterday from students and coworkers discussing what they love about Kjoller.

An adult woman died Sunday morning on Santa Barbara's East Beach after she was brought to shore from an ocean swim.  During that swim with others, she had what was described as a medical emergency.   Santa Barbara City Fire, AMR and police were on scene within minutes along with several citizens.  CPR was performed for about half an hour.   Her identity was not released. 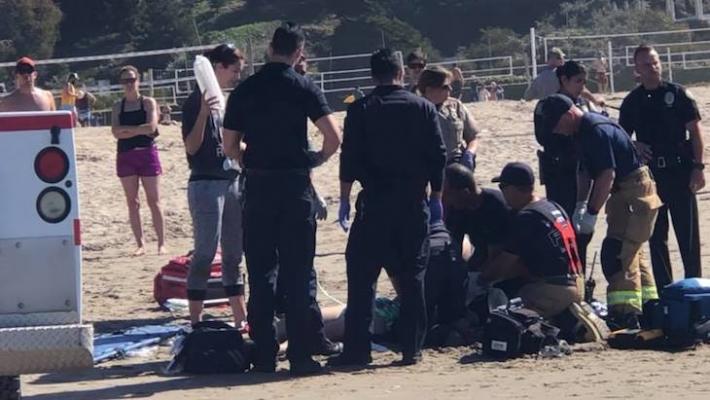 Swimmer dies after suffering a Medical Emergency in the waters off East Beach.

Rest in Peace, beloved educator and athlete. Your life touched many, and you wont soon be forgotten.

So odd that someone so at ease in the water would die there. I know Swimmers who excelled in high school and college stolick with the sport for life, which is a wonderful thing about it. But some swimmers, such as a friend of mine, develop an arrhythmia caused by the shock of cold water. I wonder If that is possibly what happened here. The water is especially cold this winter and she’s a regular swimmer who probably goes at it hard. Quite a loss.

Marcie Fuller Kjoller Memorial Celebration will be this Sunday, April 7th at 1:40pm at East Beach in Santa Barbara. Bring towels to sit on, boards and boats/kayaks etc. to paddle out. The celebration will continue at Marcie's happiest place on Earth- The Red Piano 519 State Street immediately following the paddle out. (Must be 21 years or older for the Red Piano.) ------
In lieu of flowers, please consider making a donation in her name to any of the following:
1. UCSB Swimming Marcie Kjoller Most Inspirational Scholarship
2. The Red Piano Marcie Musical Scholarship
3. Heal The Ocean
4. Alpha Resource Center

They said some very nice things about her on KEYT. A great loss for our community.

Please note that the video is from one year ago. She was at the homeschool part of Charter School for many years. When she left to come to campus based, this video was made for her.

She will be so missed. A truly great human. Kids can tell.

Beautiful video. I am sure those families are taking the news hard.

What a wonderful video. She will be missed by many.

sad news for the swimming community.

Such a bummer. She was an awesome teacher at SBCS. RIP!!!!

There hasn't been an announcement about who she is yet, has there? Tacky to indicate that info if you're not a family member!

Maybe Santa Barbara Christian School? They call it Providence too.

The Swimmer was a female who was in the water with others she had a medical incident went under was pulled from the water the Fire department, and Medics preformed CPR on her for some time but she passed away...

No more info from me sorry...

Any info make or female?