On September 16, 2021, around 12:20pm, the Santa Barbara Police Department and Santa Barbara County Bomb Squad determined a suspicious package near De La Guerra Plaza was a cardboard box full of clothing. A portable X-Ray device was used to determine the contents of the package. The box was located in the open courtyard adjacent to the City Attorney’s Office.

The Santa Barbara Police Department greatly appreciates the cooperation of the businesses affected and community members complying with the evacuation / stay away order.

Though this particular box was not to be dangerous, we always recommend calling law enforcement officials if you see a suspicious packages. We treat every situation like this as if it could be a dangerous device and harm members of our community. 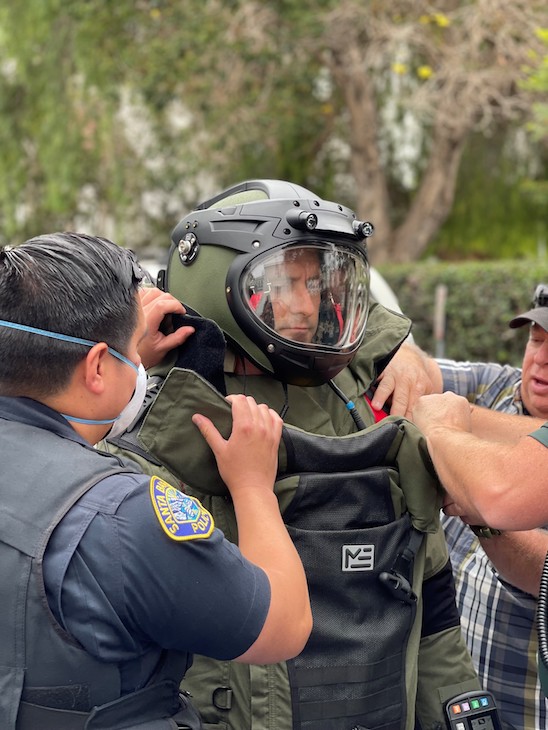 Situation at De La Guerra Plaza has been resolved. Area is now open to vehicles and pedestrians.

Currently, the Santa Barbara County Bomb Squad has been notified and is responding to the De La Guerra Plaza area. Notifications are underway of those businesses and surrounding areas that needed to be evacuated. The area is being cordoned off, and no pedestrian or vehicular traffic will be allowed in the area until further notice.

We are requesting community members stay away from the 700 block of State Street, First block of East De La Guerra Street, and De La Guerra Plaza until this situation is resolved.

If there is a future area or business that needs evacuation or if there is a public safety concern, those establishments will be contacted by law enforcement personnel.

Maybe if we did something about the homeless problem, we wouldn’t spend thousand on a bomb squad call out for a box of clothes. Maybe the bomb squad should check every underpass and tree line next?

CONSERVATIVE - ugh, really? How does this have anything to do with the homeless problem? Also, context. A cardboard box near a government building, especially during these times of domestic terrorists planting or plotting to plant bombs near government buildings, is far more alarming than a box in a homeless encampment. Then again, the way some of you people speak on here, maybe we should be more vigilant about bombs in homeless encampments....

You’re right SACJON, the government officials and transients have a deal not to cross paths on each other’s territory

CONSERVATIVE - huh? Made absolutely no sense.

Sac, my first instinct as someone who spends a lot of time downtown, is that this was a box of clothes left for the homeless by a good samaritan. Every week I see bags of groceries and a few times I have seen clothes left, too. Usually around Canon Perdido, DLG.

Yet more evidence that conservativism is intellectually bankrupt.

Ask Biden, maybe he hasn’t handed them all out to the Taliban yet

Did Biden "hand them out" before or after Trump signed the surrender agreement that was made possible by releasing 400 of the most vicious Taliban terrorists?

Biden’s handlers have been President for 9 months, stop blaming Trump for everything. I know you aren’t ACTUALLY defending the way Biden handled it

trump literally penned that withdrawl...... sorry buddy but your not going to push that lie on here.

VOICE - "Every Trump plan" or most/some of them?

VOICE - Bingo! I was wondering if you were going to catch that. Yep, my comment was a whataboutism, but I couldn't resist. See how admitting flaws can be liberating?

SERIOUSLY! STOP IT! This thread is about a "suspicious package" and I open it to see you all bitching and whining about that idiot Trump and his mindless followers. How about keep it on topic? That too much to ask?
Suspicious package, let's call in the Calvary....because we are THAT paranoid and THAT brainwashed to think that every box on the ground is gonna go BOOM? That's sad and a bit too much.

Look, this is Santa Barbara, we are not a target, there are no terrorists in SB or near SB. We are VERY small on the global scale. Love ya all, but this is just weird...

“Paranoia the destroyer”
- The Kinks

I sincerely hope that people

Living around the corner, the

This is another example of

The company that flies the

Thank you for your great

I hope they're thinking of a

I'm surprised they built out

This photo is horrible and