"At the request of the Guadalupe Police Department, Sheriff’s detectives will be investigating an officer involved shooting that occurred this morning at the intersection of La Guardia Lane and Gularte Lane," wrote Sheriff's Public Information Officer Raquel Zick in a Twitter post.

After 6:30 a.m. five Guadalupe Police officers responded with Guadalupe Fire to a report of a tire fire in the area of Gularte Lane and La Guardia Lane. Guadalupe Police are automatically dispatched and respond to all fire and medical calls in Guadalupe. The Fire Department was staged in the area due to previous contacts with a dangerous subject that lives in the area, according to the Sheriff's Office.

The sequence of events that transpired after officers arrived on scene, and before the suspect was taken into custody is currently under investigation by Sheriff’s Office detectives. 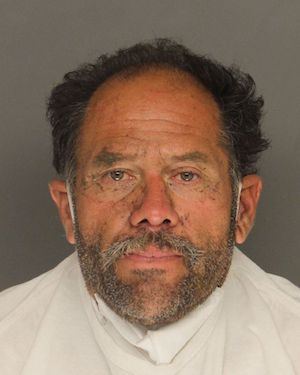 Scanner traffic reports the suspect, 48-year-old Paul Delgadillo of Guadalupe, attempted to ram officers with a vehicle. The Sheriff's Office states three of the officers fired both lethal rounds and less-lethal launchers at the suspect. Delgadillo was taken into custody, transported to a local hospital where he was medically cleared before being transported to the Main Jail.

Delgadillo was booked for assault with a deadly weapon- other than a firearm against a peace officer (felony), and obstructing a peace officer (felony). Detectives authored a request for bail enhancement due to the seriousness of this crime and the danger to the public. The bail increase was approved and Delgadillo is being held on $1,000,000 bail.

The officer who discharged his firearm was Sergeant Frank Medina, who has served the Guadalupe Police Department for 17 years. This investigation remains ongoing. There were no officers injured in this incident and the suspect was not struck by gunfire. The Sheriff’s Office will be conducting the criminal investigation, and Guadalupe Police will conduct the administrative investigation.

A subject was at gunpoint with a pipe in his hand refusing to comply then jumped in a green van threatening to run over law enforcement. Guadalupe Police and Sheriff's Deputies are responding code 3 (lights and sirens).

This was on La Guardia Lane lost cross street...Subject was refusing to comply first with pipe in his hand then jumped in van threatening to run over LE..Before I could get it written up heard "Shots Fired" then heard hit with a pepper ball...Great Job Guadalupe PD...

Subject is a male who has had numerous run ins with Police and becomes 415, with police not one to comply. He is lucky to be alive after threatening to run them over.

Clearly a frequent flyer. Belongs in a mental hospital, not the streets.

They serve better food in those places than jail.

From Sorrow to Celebration: A Community Memorial Altar at Paradise Found

Biden's energy plan is to

Nobody cares about these

Very glad to see these

Now that is a job well done

The blame lies with the

Fire department to have

Clear of the incident at the