Deputies have arrested a suspect responsible for two brandishing incidents in the past week. On Saturday, April 24, 2021, at 3:37 p.m., deputies responded to the 5900-block of Stagecoach Road on a report of a subject pointing a rifle at people in the area. The suspect fled in a silver Honda Accord prior to deputies’ arrival, but they were able to gather witness descriptions of the suspect and his vehicle.

Today, at approximately 7:44 a.m. deputies were dispatched to a call of suspect with a rifle in a silver Honda Accord threatening to kill people in the 100-block of Winchester Canyon.  The suspect again fled prior to deputies’ arrival. Through their investigation, deputies were able to identify the suspect as 39-year-old Marcelino Valente-Cruz of Santa Barbara.

At approximately 3:12 p.m. this afternoon, deputies spotted the suspect in his vehicle in the area of Mandarin Drive and S. Fairview Avenue. The suspect was taken into custody and the weapon used in the brandishing, a Red Rider BB gun, was recovered from the vehicle. Deputies’ investigation revealed that Valente-Cruz was the suspect for both brandishing incidents.

Valente-Cruz was booked at the Main Jail for brandishing (misdemeanor) and criminal threats (felony). He is being held without bail. 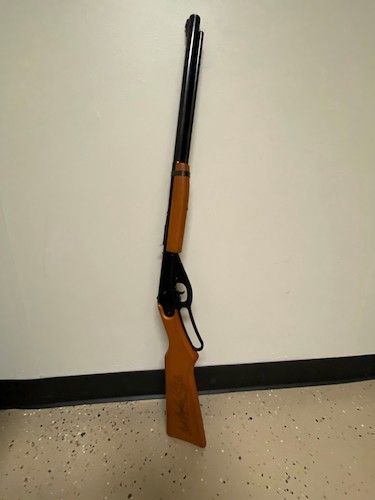 Suspect brandishing a gun at employees of Bragg Farm, 199 Winchester Canyon Road, and threatening to kill them.

How is it that no one in these incidents recognized the fact that it was a Daisy Red Rider BB gun? When I was a kid, we all had one.

Red Ryder BB Gun this guy watched The Christmas Story alittle too much...

He lives in Santa Barbara it would be nice if they did release him if they let us know when he gets released..

Thanks for the info he was a weird guy I hope they hold him awhile..

Pretty sure they got him but did not hear in custody can anyone confirm the capture??? 8nn?426 Honda silver civic or Accord SB City resident.

Maybe he will spend some time in jail..

I know they had him stopped they cleared code 33 so hopefully all is well..my radios not coming in so well..

I don't know the location.

Sounds like a Felony Stop requesting less lethal say he is not speaking english..

I HEARD THEM SAY HANDS IN THE AIR..

Possible sighting of Brandisher on Fairview..

No updates weird call just like the other one at Cold Springs the other day not sure what is going on with this they do have the original guys address..

ROGER - any update on this? This is very concerning as I am a block away from this farm!

Sure hope that BOLO works!...before the trigger is released!

In the Cold Springs Tavern incident the subject was driving a silver Honda Civic older model.

SBSO&SBPD Be on the Lookout BOLO...

[Update]: A vehicle fire spread to nearby brush starting a 20-acre fire south of Jalama Road on Monday.

Burglary in Progress at Mountain Ave

Roger reports a burglary in progress in the 2000 block of Mountain Ave.

Roger reports a suspect approached a victim with a butter knife in his hand in the 900 block of State Street.