Suspect Arrested After a Robbery With a Knife in Isla Vista

One suspect was arrested and another suspect is still outstanding after a robbery with a knife in the 700 block of Camino Del Sur. On 06/21/2018, at about 11:00 a.m., two suspects in a pick-up truck confronted a man as he rode his bicycle near a parking lot at his apartment complex. The driver of the truck, later identified as 18-year-old Marco Mendoza of Isla Vista, shouted at the man and accused him committing crimes in the area. Mendoza then got out of his vehicle while brandishing a knife and he threatened the man. The victim dropped his bicycle, backed away from Mendoza, and he began to yell for help. 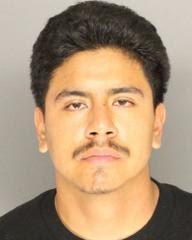 Mendoza then went to take the bicycle, but he was interrupted when other residents of the apartment came to help. Mendoza got back in his truck, while the other suspect ran off through an adjacent alley. While leaving the area, Mendoza drove his vehicle toward one of the good Samaritans that came to assist. According to that victim, he had to jump out of t he way of the accelerating vehicle to avoid being struck.

The responding deputies quickly broadcast information about the crime to other law enforcement personnel in the area. Mendoza and the vehicle he was driving were located a short distance away at his residence in the 6700 block of El Colegio Road. Mendoza was booked into the Santa Barbara County Jail for violations of California Penal Code § 211 - Robbery, 182 - Conspiracy, and 245(a)(1) – Assault with a Deadly Weapon. He is being held on $100,000 bail.

Toggle Comments (Show)
Suspect Arrested After a Robbery With a Knife in Isla Vista
Doesn't sound like the knife helped much, when criminals get caught they are not mean't to be criminals...
Please Login or Register to comment on this.

The back room deal making