Less than 48 hours after defeating the San Francisco 49ers in the NFC Championship game and punching a ticket to Super Bowl LVI, Los Angeles Rams linebacker Von Miller made a special appearance at Cate School to kick off its celebration for Black History Month.

The eight-time Pro Bowler and Super Bowl 50 Most Valuable Player answered questions one-on-one from Cate junior Carlo Kim about his life and career before addressing questions from the entire community.

Miller opened up about his midseason trade from the Denver Broncos to the Rams, his work ethic and inspiration from Kobe Bryant, being one of the last players ever to sack Tom Brady, and his career backup plan as a poultry farmer if football didn’t pan out.

“Thank God I made it to the NFL,” joked Miller, who majored in poultry science at Texas A&M. 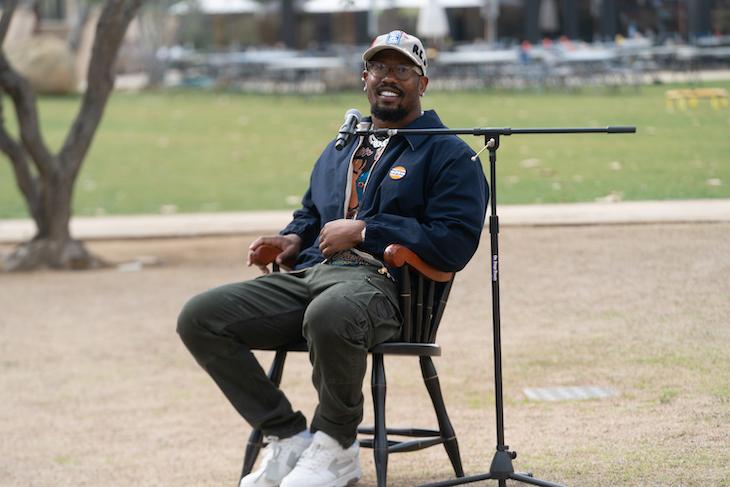 Kyle Mason, Cate’s Director of Outreach & Recruitment and Head Track & Field Coach, helped organize the event with the Kim family and spoke to the excitement of having the future Hall of Famer on campus.

“We are honored and blessed to have him open our Black History Month this year as we celebrate Black Joy at Cate School,” Mason said. “He has affected change on so many levels beyond football and does so much more than what we know him for.”

Miller, who has overcome lifelong vision problems and asthma to reach the highest level of his sport, founded the organization Von’s Vision, with a mission to provide low-income students with the eye care they need to be their best in the classroom and in life.

“I started out trying to help one or two children, and now we have raised millions of dollars in eyewear,” Miller said. “It’s an honor and a privilege to start Von’s Vision and for it to have the type of impact that it has.”

Following the Q&A, which lasted well over an hour, Miller took photos and signed autographs – even for one brave student wearing a Cincinnati Bengals jersey.

He also took a photo with members of the Cate football team, also nicknamed the Rams, who won the School’s first-ever CIF Division I 8-Man Football Championship in November.

It was a memorable afternoon on the Mesa, and there will undoubtedly be many Cate Rams cheering on Miller and the Los Angeles Rams come Super Bowl Sunday.

Von Miller should have NOT attended, a simple "Dog and Pony Show" - it's called connection$... Shame on him... Really, CATE, howz about a visit to (any) local High School where kids need hope, and encouragement (many) parents can't pay for...

Why are you shaming Von Miller for stopping by a school?? That's just an odd reaction to someone doing something nice....

Ooof.. yet no update about the school's "alleged" history of protecting child molestors?

That’s cool that the students got that experience. I still wouldn’t send my kids there. Too much molestation.

I guess you weren't touched by his visit, heh.

Good on him for making time for kids. More successful people should. The whole privileged supporting the privileged thing is kinda lame. Maybe a visit to Franklin School or another lower-income school would be better. Cool for the kids nonetheless.

FOND - it's beyond that now,

You could have meant "5

Sac : so should you!