Groups of local students are planning to walk out of class at 10:00 a.m. Wednesday as part of a national movement to honor those who died in school shootings.

Students from Dos Pueblos High, San Marcos High, and Santa Barbara High are expected to participate and meet at various locations for rallies.

One month ago, Nikolas Cruz killed 17 students and faculty members at Marjory Stoneman Douglas High School with an AR-15-style rifle in Parkland, Florida. The surviving students and their allies have banded together forming a movement of activism and advocacy.

Wednesday's national school walkout urges their peers across the country to join them in honoring those who have lost their lives in school shootings and to demand that Congress acts now on passing stricter gun control laws.

According to EMPOWER who is organizing the movement, among their demands participants want Congress to:

On 3/14, students are walking out of class at 10am across time zones to demand Congress take action to stop gun violence. Show your solidarity with @WomensMarchY:

The walkout is expected to last 17 minutes, one minute for each person who lost their life last month.

Many schools are threatening detention, suspensions, and other disciplinary actions to students who participate in this walk out. It's unknown if Santa Barbara area high schools will punish students who walk out of class.

Edhat will update this article with more information about local students as soon as its available.

Do you have photos or video of the protest? Send it to ed@edhat.com for us to post!

I happened to see students at Monroe Elementary join the 10:00 walkout today holding signs of support for the students in Florida and against guns being in schools. Some cars honked as they went by. 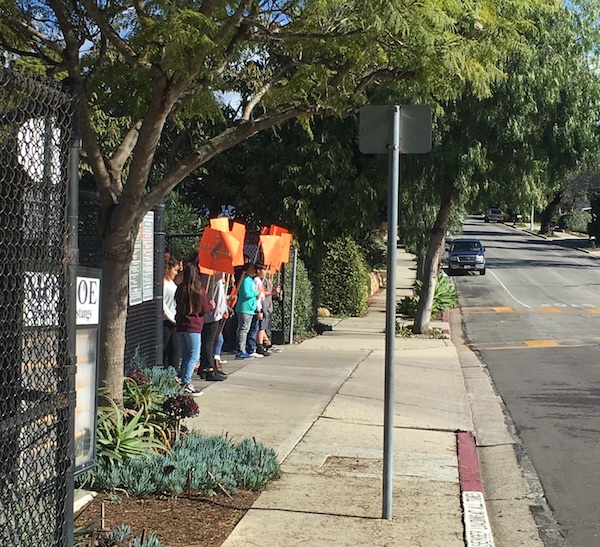 These students are getting used for clearly partisan political purposes. Teachers unions donated $200 million to political campaigns while the NRA donated only $20 million. Who is really running the political agenda on gun issues, along with plenty of outside money including George Soros.

Factotum, you seem to be a right wing shill. Quick google search shows:
"If you add it all up -- candidate and party contributions, independent expenditures, and lobbying -- the NRA has spent $203.2 million on political activities since 1998." They spent $30M getting Trump elected alone. If you think your facts are right, give a reference next time. Mine is politifact dot com.

You left out how much the teachers unions have been spending. plus all the other public sector unions. Who really owns the current political agenda? Not the NRA. By a long shot - if you pardon the pun.

Rather than name call and cherry-pick facts out of context, everyone is invited to visit the website OpenSecrets to see who are the political-funding heavy hitters. By far, it is various unions, who have direct interests in taking as many of your tax dollars as possible.

SMHS Students at LaCumbre Plaza just heard SBPD say there were counter protesters near by...Per Student Walk Out some teachers are with them.

Elementary kids are still on school grounds! And 10 am is recess for many.

There was a fight brewing but it's OK Now SBPD on scene with teacher involvement Keeping the Peace, more SBPD units responding.

Most of the group is heading back to SMHS Half is still on scene at least 5 SBPD Units are on scene at La Cumbre Plaza.

When this country decides to not revolve its entire existence around money, politics, guns and religion then we’d be ok but to brutally honest we are screwed as a whole :(

These poor kids should not have to be protesting anything because school shootings shouldn’t even be a thing. They should be happily bouncing around on the playground with their friends.

We just hope all the students and adults strive to be
kind to each other...High School has not been historically
a hotbed of love and compassion for those who are different.

Good for these students getting involved and protesting the affair our country has with guns and the NRA. For one thing, there is absolutely no reason for assault rifles; when he 2nd was written there were "muskets". The 2nd amendment says we have a right to bear guns "for a well armed militia". What in heck do people think our armed (well armed) military forces are?

Flicka: It's obvi when you say "What in heck do people think our armed (well armed) military forces are? " that you do not understand. C'mon Flicks!

Roger - i didn't say YOU were accusing or amything, sorry if you misunderstood. Take a look the comments on the Independent if you want to see what I'm talking about with LBRB though.

Roger, LBRB was known as LRBR on Noozhawk and other sites. The only thing he ever comments on is "racism" against Hispanics, which he pretty much accuses everyone of. He is not a well person. While I like interaction with people whose views I don't share, I will no longer engage this…person…as he's a one-trick pony with nothing at all to talk about but "racism." He is the counterpart to "JoseyPhD." They're at opposite ends of the political spectrum, but are equally as pathetic. I guess it was inevitable that he'd show up here on Edhat at some point. Fortunately, most Edhatters will, I'm sure, see through LRBR/LBRB and his odd agenda and act accordingly.

OK Cool I guess we will just see whats what? I'm not in charge I just think everyone should be allowed to voice their opinions without getting Gonged but I have been guilty of that myself and when that happens the blasting we and or I gets deleted.

Many (most?) of the student protest signs reflect a protest about the NRA. But as far as all the available news info shows that none of these shootings has been done by an NRA member. Why are they protesting NRA - is it a scapegoat for the real culprits? I'm confused by that.

Sure is interesting when the votes are voted down who's names are revealed then you find out who the real trolls are Welcome LBRB What's good for the Goose is good for the gander...It's really funny the trolls squeak louder in injustice though they slander the loudest too....Enjoy your down voting Boys!

A-152, You are so right, none of the school shootings have been done by an NRA member. The NRA simply make sure anyone, no matter their mental capacity, has a right to unnecessary assault guns or any gun that can take out dozens of lives in the shortest period of time.