Santa Barbara residents are upset with the City's decision to continue street sweeping, causing a major dust-up of ash particles from the Thomas Fire and disregarding the Public Health Department's advisory.

On Wednesday, December 13, the City of Santa Barbara sent out a press release stating the residential street sweeping resumed in order to clean up the substantial amount of ash and debris caused by the Thomas Fire.

"As a result of the street sweeping operations, some dust and ash might be blown around the street area. Cleanup is a priority and the street sweepers are necessary to removing the ash and avoiding further accumulation of soot that risks causing heavier pollution problems. The City advises residents to wear masks when outdoors," the press release stated.

However, the Public Health Department has emphatically warned against doing any activities that stir up ash. The Department states ash from burned homes and other items will likely contain metals, chemicals, and potentially asbestos, items that may be considered toxic if breathed in or touched with wet skin. Some wet ash can cause chemical burns and inhaled ash may be irritating to the nose, throat and lungs, potentially causing severe health problems. 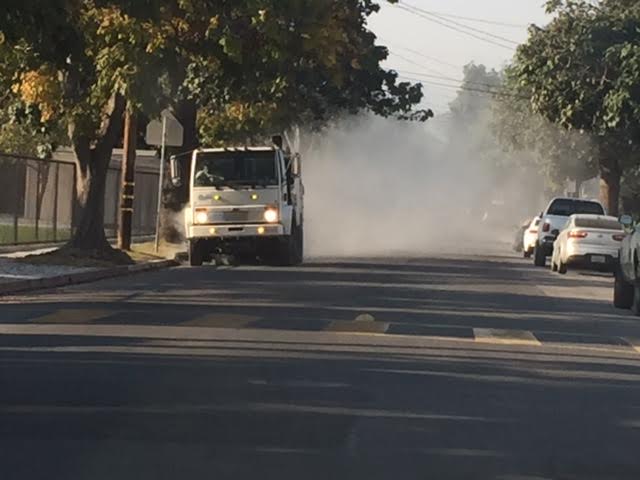 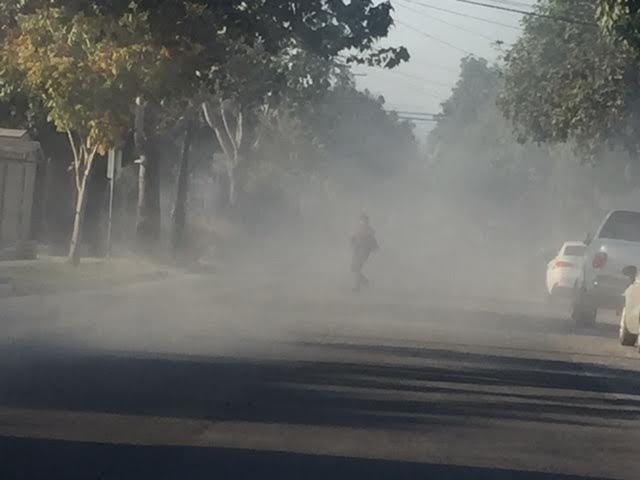 In a press release from the Public Health Department, it advised "avoid doing activities that stir up ash" and "avoid getting ash into the air as much as possible, avoid sweeping it up dry."

Many edhat readers have been confused, some outraged, as to why the City of Santa Barbara decided to continue with street sweeping while ash is still falling.

On edhat reader who asked to be anonymous wrote, "Why is the City ignoring the direct advisory from Public Health? Everyone is supposed to avoid stirring up the ash and interacting with it, yet the City is moving this harmful and dangerous ash into the air of our communities. How do we get them to stop?"

Edhat reader Jim S. wrote in stating, "Hey street sweeper, stop it! My family would like to walk to our car without being in a cloud of hazardous dust."

On Wednesday evening*, the City of Santa Barbara sent out a tweet stating they will be pausing street sweeping until consultation has occurred with ash experts. Street sweeping parking citations have been suspended as well until Monday, December 18.

[*Editor's Note: A previous version of this article did not include the City's decision to cease street sweeping.]

I remember the street sweepers as a kid back East we had a lot of dirt almost as much as these ashes and most of the time they would just blow the dirt around. A lot of Folks just swept the streets and side walks in front of their homes on their own..Same thing when it snows snow plows come along and buries your cars cleaning up the street...Just heard a leaf blower call cleaning ash in the county.

It was stated by a Public Health Doctor on the 4pm press gatherings, for 2 days, that we were NOT to sweep ashes as it is dangerous. Also not to use leaf blowers. So telling people to go sweep in front of their homes is the WRONG advice. I hope no one listens.

Funny I just heard the name Tagdes on the scanner, weird.

If you watched last night the same public health doctor is there every evening and was the one that met with the city to determine to continue sweeping. Also stated was to use damp towels when wiping down cars and WET the ash prior to hand sweeping while of course wearing your mask. Also wait until the ash has quit falling to do so. The best as already stated is watering it into plantings or your dead lawn where it won't be so susceptible to being blown into finer particles. There are many areas where watering is not an option and one must sweep it up unless they have a hepa filter shop vac. Sweeping is not WRONG if done safely and properly.

The doctor explained it on the 4:00 pm briefing. For all of you complaining, yet don't understand the issue, it's not what you can see that is dangerous. Look at the particulate breakdowns in the air quality charts. The machine , and yes it does vacuum and it used water on our street has filters that get 80% of the nasty stuff. Or as already stated get it now or leave it until UPS chews all of it up to nasty stuff. Best as I and another person said sweep it yourself and like Rex hose it into plantings or flower beds. A certain amount of ash is good for your plants.

It's not going to vacuum everything though and with the brushes going through it just stirs it all up. I think some people expected they would clean it all up.

I concur with other posters who recommend hosing down one's own yard. I got weary of having to towel off my two Huskies every time they went outside to chase each other and play in the garden. I finally just hosed down the entire yard, directing the ash to the flowerbed adjacent to the curb. I was quite surprised that by being careful with the spray, I was able to not only divert all the ash to the plants, but keep every drop of water confined to the garden itself, with none reaching the gutter. Since that time a few days ago, I've only had to hose down the yard once. No more ash tracked into the house.

They are basically breaking the Air Pollution Control District Nuisance Rule 303 by doing this - look it up. They may be gathering up some dust but they are re-entraining it into the atmosphere for other to inhale. Cease and desist City unless you have a sweeper that has a high dust control efficiency. I would rather it stay on the ground and hope it rains some day and washes away than to take this approach.

The company I work for, closed down for a few days due to the air quality. I was home at 9:09am yesterday, 200 Block west of State near the mall.
The street sweeper was driving down my block, with a massive cloud of ash enveloping the truck and following it down the street. The driver looked completely oblivious. I called public works, quite bent, that they would authorize this. The lady completely agreed and noted that they were NOT supposed to go out. I noted that he looked a bit clueless. How could you NOT see that massive cloud of ash? Wouldn't you think to pull over and call the bosses to check on this? That machine hardly spits out any water at all (if any), the brushes just break up the ashes into more tiny fine particles and sent it flying. It's inside of our home and cars since they did this. I guess simple logic doesn't apply to those folks? Water will help settle the ash....

it's not. The machine/truck they use is modified, i was told, and does not spit out water, nor does it suck up debris...it just mixes it up and pushes it around...

In front of our house we dragged a broom and put it in the flower beds. When the sweeper went by it was quick, very little dust that settled quickly. Now today what little ash there is is easily swept with no dust. If you don't like what the City is doing then pick up a broom and take care of your property. When the winds pick up tonight you will be glad you did something.

I find their idiocy disturbing.

LMAO Everyone seemed to want the streets cleaned but now that the dust is flying folks are freaking out...What did you think they were going to vacuum the ashes?

I have to agree with other replies here. Over the decades, homes in my small neighborhood have skyrocketed in price and been bought/remodeled as vacation and/or spec homes (who can afford a $2M - $3M vacation home?). You should see how dark my street is at night. All those folks have left for their other homes while the rest of us work and do the best we can under these conditions. Lucky for them.

Glad you have the privilege of being able to just pack up and leave to play golf while the rest of us are here working in this crap. How about you stay away? We really don't need more like you here. And what, exactly, are we supposed to "enjoy while we can?" Enjoy street sweeping? Jeez, try to organize a coherent thought while you're on "vacation." Ugh.

Says you from far away. As long as you're not breathing it in, screw everyone else. Idiot.

At the 4PM briefing yesterday, Mayor Schneider stated that street sweeping would NOT be done today. Guess the crews didn't get the memo.

I don't see the time on those pics. Is it possible those pics are from the 13th? But if we don't do something with the ash, we will never be able to go outside without a mask on until the April winds come and blow the ash back to Ventura. Maybe each homeowner should have to clean their sidewalks with a broom. I plan to use my laundry wash water to rinse off my patios and sidewalks.

This is beyond idiotic and reckless! What possible good could it do to clean the ash this way? It's lazy and hazardous. I saw a gardener in Goleta yesterday near my home rev up a leaf blower to clean ash and before I could walk over to him, someone else pulled up in a car and yelled to shut it off. We do NOT want to be breathing this crap! Why is SB ignoring the myriad of health professionals and taking the lazy route?

I was responding to A

They will just start using

And you know what is

I am so sorry for your loss,

This is incredibly important

Let me know when Laguna

This should be interesting...