A suspected vehicle thief was arrested at gunpoint inside the bathroom of a Goleta shopping center on Tuesday afternoon.

At 3:47 p.m., Santa Barbara County Sheriff's Deputies responded to the Camino Real shopping center on Hollister Avenue due to a stolen vehicle out of Santa Maria. Officers drew their weapons and entered the public women's bathroom behind Starbucks Coffee.

A Sheriff K-9 unit and helicopter also responded to the scene as the stolen vehicle, a white Toyota 4-Runner, was recovered.

It was later determined the female suspect was not in the bathroom but the Sheriff's Office did confirm the suspect was apprehended. Angel Marie Ybarra, 31-years-old of Santa Maria, was booked at the Main Jail for vehicle theft and an outstanding no-bail felony warrant.

The stolen vehicle was released to the owner at the scene. 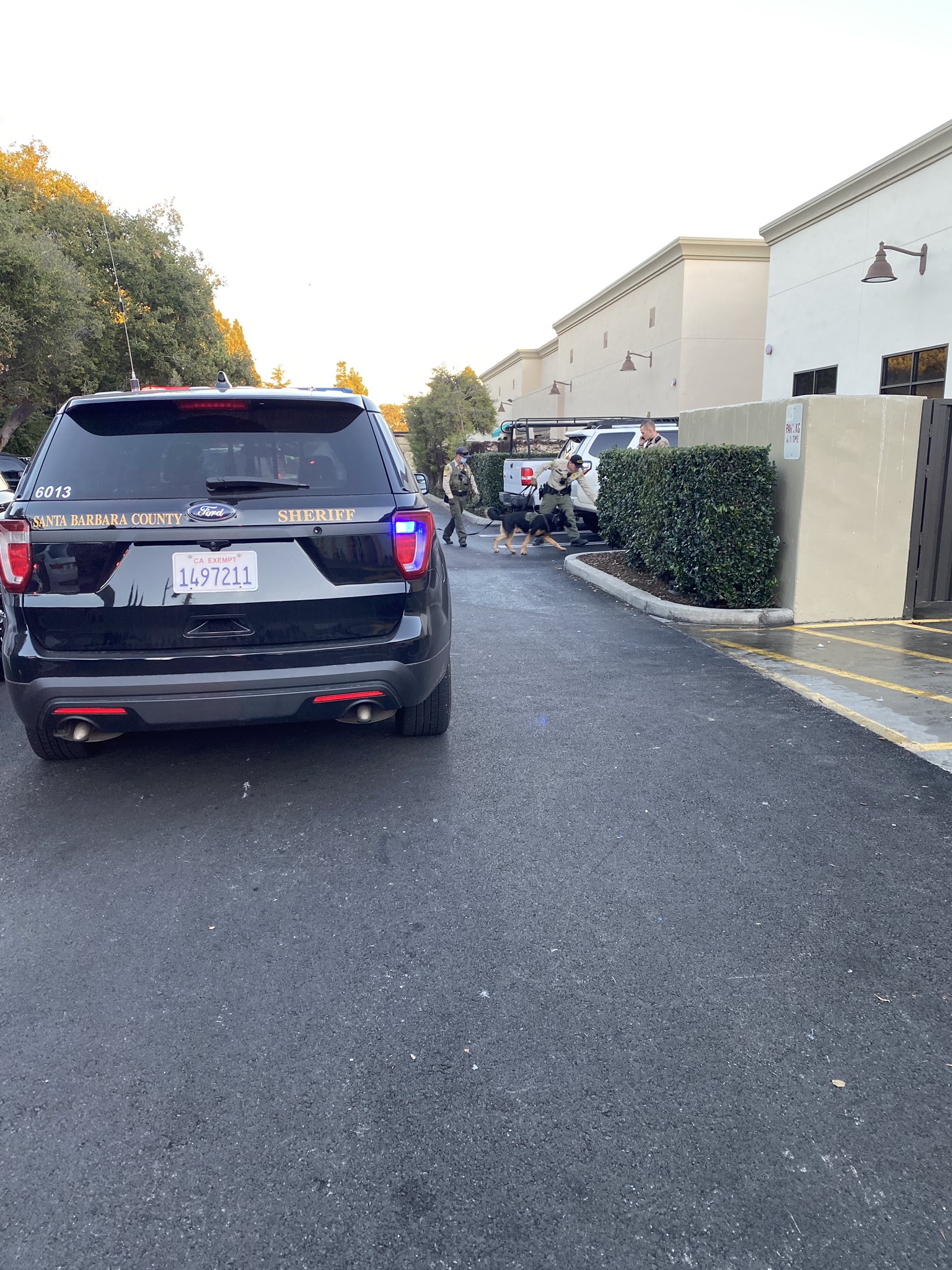 I've got a novel idea.

Why don't we keep her in jail this time instead of releasing her again like they will probably do. (pick your excuse they have an endless list of them)

One of the three deputies pictured gives a damn about the community at large.

@ 12:51 AM - I'm sooo offended! (haha...), My main point was that the K-9 unit
looked pretty eager eager to go into whatever situation was required. Our 4-legged
FRIENDs didn't get to "Choose" their profession, but seam to do the task whatever it
may be rather willingly. Obviously I greatly appreciate their dedication! side note
be pretty funny if they used cats/felines, I can see it now time for a nap.
just to be clear I'm NOT really offended... Thanks JB86

@1:22 I think you have which political leaning demands blind obedience backwards. What has a non-sheep here demanded obedience to other than the constitution and our laws? (FYI, not going to debate the difference between mandates and laws, and the judiciary vs. legislature here).

BICYCLIST, Smoking? How about its a command whistle for the dog. Leash to know where? Maybe its an extra long leash to let the dog get out ahead of the officers.

11:14 - what would you do if an unmasked, unvaxxed person tried to force you or your family to interact with them in close contact or get in a car with them? I'd sure as hell protect my family! Since they're cops though, my only real defense is to call 911. I'd demand proof of vaccination. I'd be a crappy father/husband if I didn't.

You people love to call us liberals sheep, then in the same breath you demand blind obedience to authority even if it puts you or your family's health and safety at risk. Hypocrites!

Haha yeah I knew that would rile some of you up. Lol

ZeroH - I must have a bad connection... After reading that comment yesterday, I looked at the picture and "Assumed" that the reference was that at least the K-9 was eager to go! Looked even closer & it appears that one of the SO's is smoking? My question would be the "Smoker" appears to be dragging a leash that goes backwards yet ends at his left foot?

If an SBSO officer were to approach myself or my family, I'd be inclined to call 911. They are a menace to our society.

one in 3 wearing a mask in the photo. the other 2 don't give a damn about their coworkers or the public, because ya know...proving a point is worth catching Covid.

What are you referring to?

Per Santa Maria Times Arrest Log, arrested on Dec 28 in Pismo Beach for drug paraphernalia possession. Arrested the next day in SLO for receiving or concealing stolen property.

Suspect's ID is known - she has felony no-bail warrants, and has eluded police so far, changing clothes twice. Last seen on La Calera near South Glen Annie. Caught her at 5:03 near Pet Smart.

Apparently she's not in the restrooms...Possible suspect seen near La Calera

Suspect is from Santa Maria

Copter 2 is now on scene

That guys been circling outside my work for the last half hour..
If she's locked in the bathroom idk how they haven't got her yet, or why they'd need the chopper since she's cornered

Possible inside the restrooms

wow all for a crappy stolen toyota. funny...when my truck was stolen last year, not 1 SB Sheriff assisted, in fact they blew me off completely. Ventura and SBPD helped recover it and VPD actually stayed with my truck while a friend drove me to VTA to pick it up...just so his boss wouldn't have it towed

Haha I just heard that on the scanner, that's related to this..? I got to work at Costco 10 min ago and there's like 10 cop cars blasting sirens going all around Camino, didn't hear anything obvious on the scanner app, but I did just hear the bloody finger on the door/dude in toilet a few min ago

Haha I just heard that on the scanner, that's related to this..? I got to work at Costco 10 min ago and there's like 10 cop cars blasting sirens going all around Camino, didn't hear anything obvious on the scanner app, but I did just hear the bloody finger on the door/dude in toilet a few min ago

One of the stalls is locked and the subject is possibly on top of the toilet not complying with commands. Likely the suspect.

Vehicle is unoccupied, suspect is somewhere in the marketplace

In the Camino Real Marketplace

SB on Storke south of Hollister