The 90th Academy Awards on Sunday 4 March at the Dolby Theatre in Los Angeles will be a big huge night for the cast and crew behind The Shape of Water, having been nominated 13 times, and Christopher Nolan's Dunkirk got eight nods. And once again, Jimmy Kimmel will return to the stage as host.

The Governor's Ball is the official post-Oscars celebration, which immediately follows the awards ceremony. It is hosted by Academy governor Lois Burwell, event producer Cheryl Cecchetto, and master chef Wolfgang Puck. It will be a world of culinary wonderment at the Governor's Ball, the official after-party of the Academy Awards, hosted in the Ray Dolby Ballroom immediately after the awards ceremony. An estimated 1,500 guests have been invited to the event, including this year's nominees and presenters. In honor of the special 90th anniversary of the awards show, the Governor's Ball is set to pay tribute to the history of cinema with original artifacts and music from every era of film. 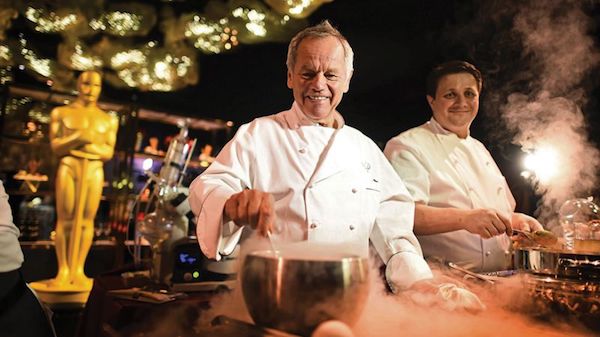 Included among the more unusual dishes Chef Puck and his staff will serve are caviar parfait dusted with 24-carat gold, caramel passionfruit lollipops. The coup de gras are always those famous chocolate Oscars – handmade by Wolfgang’s team and covered in 24-carat gold dust. Meanwhile, the chef has ensured he is bringing back some of his signature dishes such as Wagyu beef sliders, pizzas and chicken pot pie, which he says is a particular favorite of Barbara Streisand. Caviar, lobster, and truffles are all also on the menu for the Governor's Ball after the 90th Oscars ceremony, which is created by Wolfgang Puck each year. When the Oscar party gets started more than £1,400 bottles of Piper Heidsieck Cuvee Brut will be poured.
The menu starts with delicious nibbles such as wagyu beef tartare, puffed black rice, and spicy tuna tartare. The stars then feast into the small plates including white asparagus soup, caviar, truffle pot pie, black bass, and scallops. There is even a raw bar which has oysters, sea urchin, caviar parfait, and crab claws and legs.

Mango-lime pate a fruit with Tajin pop
Macarons - Negroni, mojito, piña colada
Blueberry-violet cake
Lychee-rose-raspberry tart
Ruby chocolate strawberry and cream
As Chef Puck points out, by the time they get dinner, they’ve been so busy getting ready they won’t have eaten all day. He said: "They might have had an espresso, a cup of tea in the morning. That was it. So they are all really hungry.” Kudos to Wolfgang and his staff and congratulations to all the winners, presenters and nominees of the 2018 Oscars. Visit: www.wolfgangPuck.com, www.Oscars.org
Login to add Comments

Hollywood. Movie Stars. TV Stars. Producers. Ultra wealthy. Every moment they talk the talk.....and then they talk even more.///////////// "According to Feeding America, 1 in 7 people in the U.S. face hunger every year. The rates of hunger in children are even higher, with about 1 in 5 lacking proper access to food at some point during the year."..............////////Fill your bellies Hollywood....and keep talkin' the talk.//////////Maybe Jimmy Kimmel can stop making political jokes for 5 seconds to make a plea to feed the hungry.....which is no joke./////Maybe Streep, Hanks, or Streisand could save a couple of them negroni, mojito, or piña colada macarons for a hungry kid....I bet them hungry kids would enjoy one of those along with a slice of ruby chocolate strawberry and cream thing....or even just a small portion of mini ravioli of pea and carrot with black truffle and cipollini onions. ////Why push for gun control if you can just starve them? Enjoy the show folks.

Absolutely !! Bravo !!
And you hit it right on what those self glorifying hypocrites are really all about !

Good heavens, just because people eat well at a yearly party doesn't mean they aren't donating to a good cause, or more. For instance, Jeff Bridges does a lot to donate and bring attention for "Feeding America" which addresses child hunger. I'm sure there is a lot of food left over from these big deals that gets donated to a homeless shelter or some place similar. Not likely dumped in the garbage. Maybe instead of having a steak barbeque we could all give our dinners to someone hungry. It's sort of like comparing apples to oranges.

......or comparing apples and oranges to self-absorbed multi-millionaire movie stars (except Jeff Bridges).

This leftover food will really fix a lot when LA homeless population, for instance, is huge and growing. "Los Angeles County's homeless population has soared 23% over last year despite increasing success in placing people in housing, according to the latest annual count released Wednesday. The sharp rise, to nearly 58,000 ..." -------------- http://www.latimes.com/local/lanow/la-me-ln-homeless-count-20170530-story.html