Goleta, Santa Barbara, and Carpinteria came together for the first-ever joint Chamber of Commerce event this week.

Under the new banner of the "Santa Barbara South Coast Chamber of Commerce," city representatives, business owners, movers, shakers, and hobnobbers alike came together on Wednesday at the Hilton Santa Barbara Beachfront Resort for a State of the City luncheon.

“This does feel historic to have brought them all together in one event so that our business members can come and hear from all three cities at one time,” said Kristen Miller, South Coast Chamber of Commerce president and CEO.

In the Spring of 2020, it was announced that all three Chamber of Commerces would join forces to be a super-duper South Coast Commerce creating a unified voice for local businesses, and making it a lot easier to attend events for multiple cities.

Following a lively networking hour were presentations from the three Mayors and city staff from Goleta, Santa Barbara, and Carpinteria.

Goleta Mayor Paula Perotte and Finance Director Luke Rioux gave the most in-depth update on the city's completed projects, upcoming projects, financial status, and beyond. There were so many informative charts and graphs, I felt like I was back at the dreaded statistics course at UCSB. Regardless, I commend them for being prepared and informative.

Gregarious and ever-charming Carpinteria Mayor Wade Nomura livened up the crowd with a pro-Carp, save the small-town kind of speech that just makes you smile. The biggest developments were the completed funding for the $2 million skate park that is set to break ground this summer and the transition of the Santa Barbara County branch library to a city-run Carpinteria Community Library. 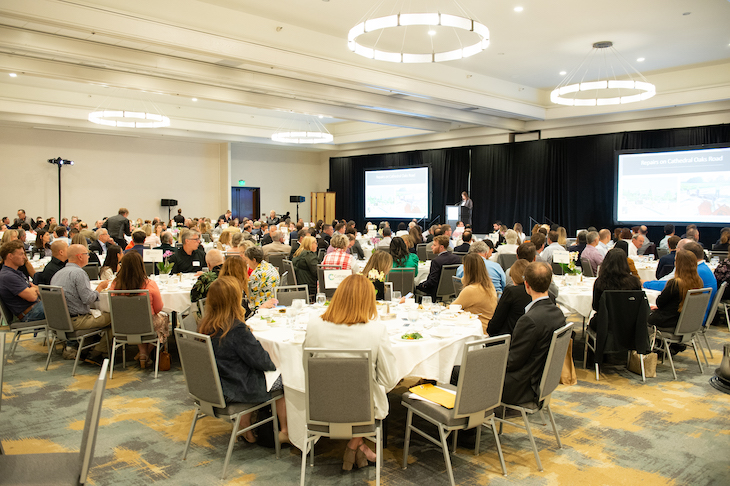 Santa Barbara Mayor Randy Rowse kicked off his speech with a joke that insulted the crowd, saying it's good to see everyone without masks but many are not quite as attractive as he remembered. Yikes. He then "smoothly" transitioned into the success of the newly opened $15.5 million Las Positas and Modoc Road Multi-Use Path, State Street's transformation into a parklet promenade, and updates on the Central Library's new plaza.

The newly crowned Santa Barbara City Administrator, Rebecca Bjork, was the last speaker who gave a very brief overview of the city's financial standing and explained that cruise ships are good for the local economy.

For more in-depth facts and figures about the South Coast, the Chamber of Commerce released a data dashboard this week to showcase the region's economic development and recovery. It includes data relating to the local workforce, real estate, taxes, tourism, homelessness, poverty, and COVID-19. It's definitely worth checking out here.

I can't write about a luncheon without mentioning the lunch. A healthy green salad was the starter with a side of some type of clotted cream that tasted way better than it looked. The entree was comprised of a slow-roasted chicken thigh and wing atop gnocchi and vegetables with a light and flavorful herb sauce. It was followed by a delicious slice of strawberry cake. The meal was beyond tasty and almost made it worth being called ugly by Mayor Rowse.

Learn more about the Santa Barbara South Coast Chamber of Commerce at https://sbscchamber.com/

Glad to read recaps like this with a little bit of flavor. The others are a bit stiff and don't give you the feel of what it was actually like there.

We used to call ours "Safety Meetings".

No matter the name, somebody fired up a joint.

Time to fire your joke writer Randy. Can only imagine how flat that fell on this crowd.

UC is UC. if they’re able to

It’s the can of worms,

Anyone know what those two