New reports are coming in that the start of the fire was near a homeless camp.

John Palminteri of KEYT captured photos of the camp reporting it's near the point of origin. There were no reported injuries and the official cause is under investigation.

At 4:53 p.m. Santa Barbara County Firefighters responded with a full brush response to an area between Los Carneros Road and Fairview Ave along Highway 101 southbound.

Crews found a brush fire burning between the freeway and railroad tracks in heavy grass.

Fire Captain Dave Zaniboni reports the fire is less than a 1/2 acre and forward progress has stopped, but it is putting up a lot of smoke.

Firefighters will be on scene for quite a while doing an extensive mop up. The cause of the fire is unknown at this time.

Highway 101 is slowed down to one lane in the southbound section. California Highway Patrol is on scene monitoring the traffic. 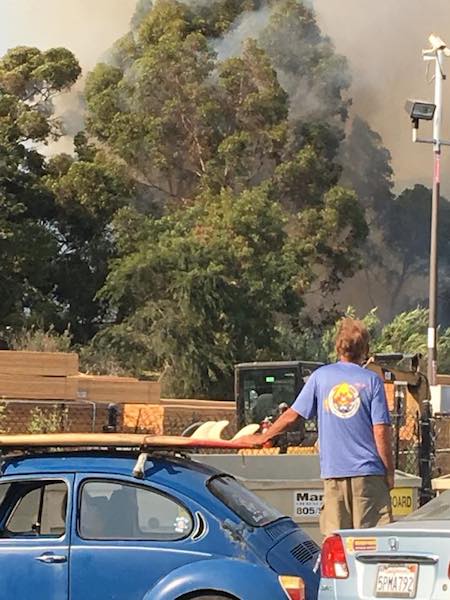 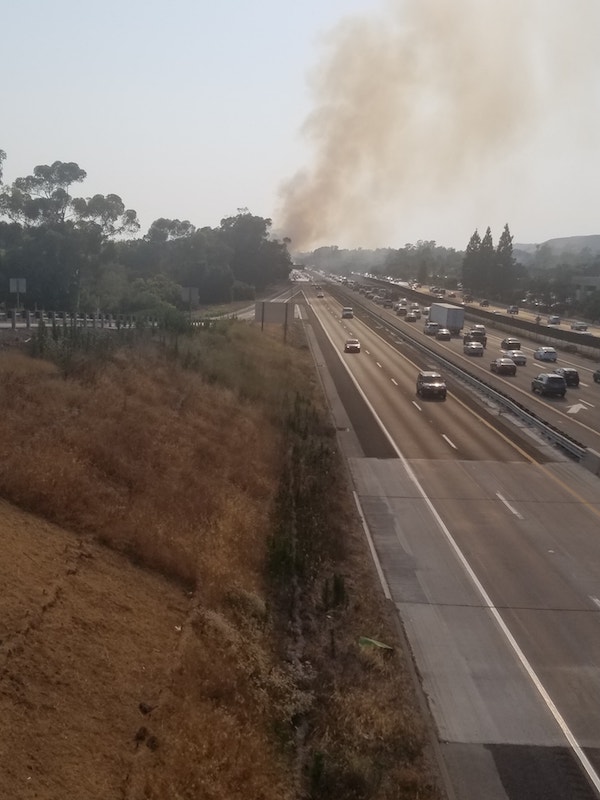 The other day there was a homeless guy walking down our street yelling at some pedestrian, who was yelling back (dumb idea). .The homeless guy was really aggressive and worked up. He walked up our front lawn right towards my front door, which was open due to heat (for cross ventilation) and almost came in! Luckily I happened to be there to see it and quickly slam the front door. He did walk away when he saw me, so I didn't call the cops, but i wonder had i not been in the room would he have just walked right in? Yes and then what? Forget about stupid straws, something needs to be done here! It really scared me. Could the citizens form some sort of coalition to get something done, like the RV ban?

So my previous post pointing out that neither Goleta nor Carpinteria have done anything of significance to address the homeless problem that so many residents of these towns hysterically comment on was 'downvoted' in another act of Orwellian knee jerk response. If we don't have record of the comment then 'history' will show that it didn't happen. It would be so much more adult to speak to the facts, respond to the thoughts and engage in a dialogue than to pretend that your 'side' is unbesmirched in the back and forth. These are the tendencies that make one fear for democracy.

Check out real estate prices in Trona California - $25,000, estimated monthly mortgage payment $100 a month, Move in with a friend. Place to park your RV.. It is absurd to say you cannot find places to live in this state, even on SSI payments.

If every "Homeless" sympathizer would invite just one of these people into their homes, I think they could alleviate- or at least mollify- the problem. Yet in all my years of living, which are bordering on 70, I've never seen a soft-hearted idealist put their money where their mouth is.

These softhearted idealist put their money where their mouth is when they support governmental programs to provide safety nets, basic health care, education and housing to the less fortunate. This is their tax money as much as yours. At the same time your side seems only willing to spend tax money on violence, war, repression and incarceration. I choose the bleeding heart side over the bleeding bodies side.

What a GREAT idea!!

I took many people in many only acouple did not screw me over, I heard Ken Williams used to take people in though he never told others about it. Alot of the people I took in have lives now and they don't help others they talk alot of crap though...

Obligation? If you think that way you are part of the problem. Govt is not there to solve all ills. If your car needs repair which city council member do YOU call?

Welfare nation, is that what you are proposing? Opportunities are rife to avoid homelessness for those willing. Bootstrap theory.

How down on your luck is it to demand to be fed, clothed, housed and cared for for free in this premium coastal California location. Sounds like Lady Luck is smiling on these people. It is long past due to re-open state funded institutional care facilities that were available in the past for those clearly incapable of independent living. The rest nee to make the best decisions in their own lives and find a place they can afford to live, on their own resources.

"Goleta in particular has completely ignored any obligation or equitable concern for the homeless in their community." RHS how can you say this? Of course Goleta has comprehensive programs for their homeless. Goleta has buried its head in its share of the Montecito muck and when they open their eyes all its homeless will have moved to the new freeway view sites in Carpinteria. In the meanwhile all that's needed are smoke detectors and fire extinguishers for the 'Fairview village.'

Kind of not fair though. I work extremely hard just to be able to afford my rent and pay my bills and I can barely make it. I don’t get any help! Why should they when they don’t do anything??

Homeless camps and poorly maintained autos recently causing multiple brush fires. In our highly over-regulated state. Why is this happening when we can no longer even use plastic straws without risking going to jail.

SBitZ.NET has the smoke map along with some other stuff I found rummaging the web just now. It's the 3rd Topic, or you could try this direct link - https://groups.google.com/forum/#!topic/sbitz/P-gwKEUOSdY - Scary fire season ahead. :(

Smoke from Yosemite and other fires to our North was very thick here at sunset. The continental smoke map showed heavy smoke over almost all of Canada and nearly all of the U.S. - Basically all but the states where flooding is going on. I've been seeing this sort of continental heavy smoke coverage more often in the past few years. The air quality map similarly shows large affected areas. Did anyone get pix of the red moon it created? If the lunar eclipse creates a "blood moon" what would you call the full moon we saw through last night's smoke?

Interesting, approaching sunset, maybe around or close to 8, I definitely smelled smoke but I assumed it was from the fire off the 101. So you're saying it was from the Yosemite fire? Wow. I did check the Moon (and Mars) out last night, but it was clear and bright and not red from my vantage point.

Around 5 PM, on Lower Riviera I could smell this smoke in my backyard and thought "Fire somewhere?" Amazing that the smoke stench can travel that far, that fast.

Is the fire still going? Smelling a lot of smoke on the Mesa

Why not clean that area out starting to see tents on the sides of the highway 101. Plus now who pays for this fire?? Sheriff Brown can we do something about all the homeless camps popping up in SB!!

Smell smoke, get these homeless out..Sick of this ! Homeowners, Business Owners, unite..

I agree, this has now affected plans for the evening due to massive delays on 101 and 154. I feel sorry for the hardworking commuters who have to deal with this, from people who are just bums.

All effected homeless are being evacuated to State Street.

Thanks for the grammar lesson.

The beach would be better.

Command Post set up between Fairview and Los Carneros Southbound 101 at the Batt: Chiefs vehicle...

Witness: Male and female Homeless couple seen leaving the scene of the fire as it was starting...

Homeless camp and fire personnel with a chain saw a woodchipper might come in handy too..

Looking for Peds on the RR Tracks heading Northbound walking toward the fire.

If anyone is in the area or was let us know what you saw sounds like a sizable fire.

Saw from fairview onramp. Looks to be homeless camp.

On ramp and the number 2 lane blocked...

Edhat, sorry, but I was