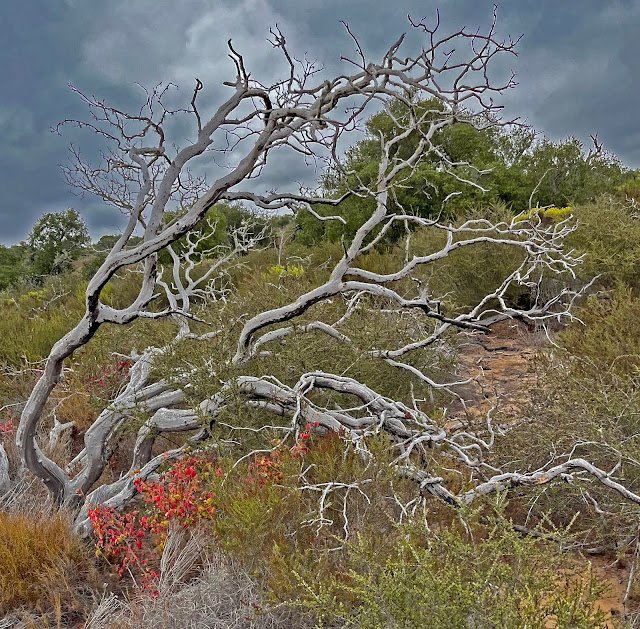 The weather is turning to Fall, the stark skeleton of a manzanita stands in the chaparral amid crimson poison oak. We went for a ride to see the seasonal changes at La Purisima Mission above Lompoc. 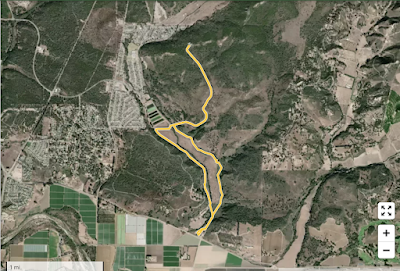 Instead of our usual exploration of the sandy trails, this time we stuck to the paved and dirt roads surrounding the central valley and then walked up to the water towers for the overlook.

Tobe Mule has a hoof injury, so we had to stick to civilized paths. 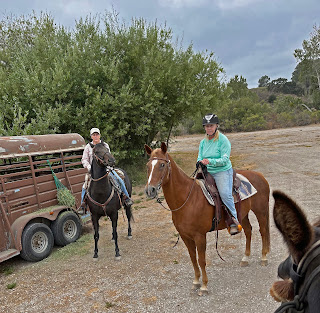 We were joined by our pals Jamie on Mosca and Kim on Kitty.

There is a lovely old bridge near the Mission and I invited the ladies to stop for portraits under the lace lichen hanging down. 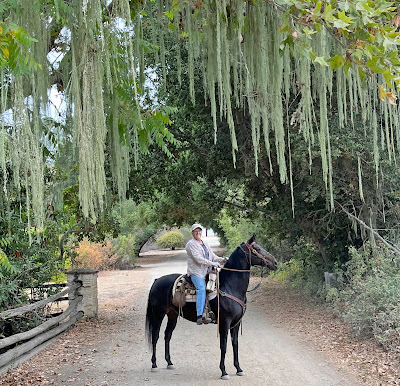 Mosca the Appendix thoroughbred always poses like a supermodel, very alert, and Jamie has to be alert also to ride her! 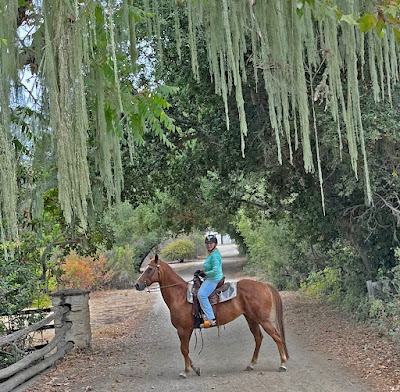 Miss Kitty is a classic quarterhorse, and most of the time a relaxed trail companion.... except when she notices something out of the corner of her eye and Kim has to manage a bit of a rodeo reaction!

TobeMule is happy to escort the mares. 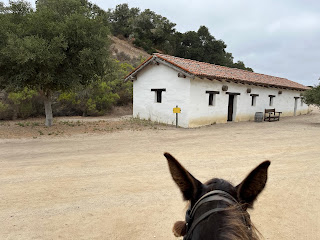 As we walked out from the Mission buildings area Tobe gave the ears up alert. Something odd up ahead. 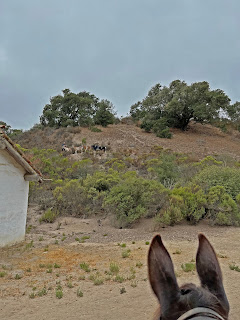 What the heck? Up on the hillside behind the last adobe were five goats! According to the U.S. Geological Survey, a group of goats is called a tribe or a trip. Tobe was tripping on them!

As always I enjoy being able to zoom into my iPhone photo and give a closer approximation of what Tobe can see with his huge eyes, which are eight times larger than human eyes; in fact, they are larger than those of any other land mammal.

I'm still wondering what kind of goats they are and he can probably tell their sex and age.

We waved to the goatherd and went on. 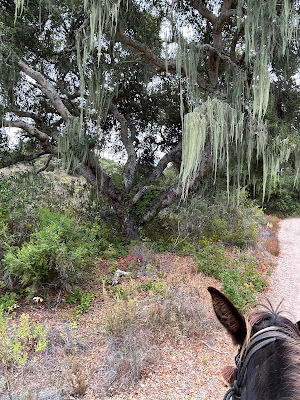 The lace lichen was everywhere, lush and spectral, waving lightly in the air. I can imagine the original padres who settled this Mission feeling at home when they saw it, thinking it is similar to Spanish Moss. 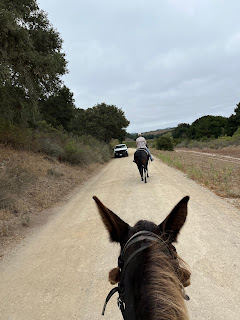 On the road that encircles the central valley we saw some staff members in a jeep. They nicely stopped for us to pass. I mentioned that the trails seem very overgrown and I asked what their current staffing situation is. Well, they used to have over a dozen people assigned to the groundskeeping, now there are only three. 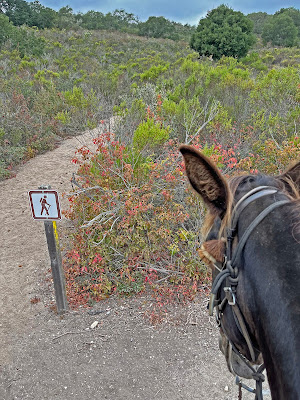 With the large number of people who visit daily that is not nearly enough staffing.

Today we look wistfully up some of the hiking trails that lead into the hillsides, but for a while we are stuck on the flats. Where as usual we encounter bicyclists. This fellow was perfect. He stopped, said hello, pet the creatures, nice encounter.

LATER when we came upon a small bridge further up the trail the OTHER kind of bike rider came whizzing around a corner and right on top of us. Too occupied with keeping my seat as Tobe did a bounce to the side to get out of his way I was unable to take his photo, but I did yell "You're supposed to STOP!" at which point the thoroughly Anglo 20-something jerk yelled back "NO HABLA!" and sped off at warp speed. Yikes.

We know someone who was thrown from her horse here and hospitalized with injuries by an identical encounter, and she no longer rides.
“Courtesy costs nothing, but buys everything.” 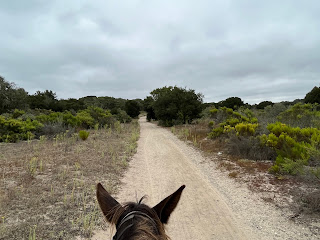 And we stroll on.

Much as I like to go bashing and thrashing through the undergrowth of the hillside trails, today it was quite enough to be out for a walk with friends and look at plant life. 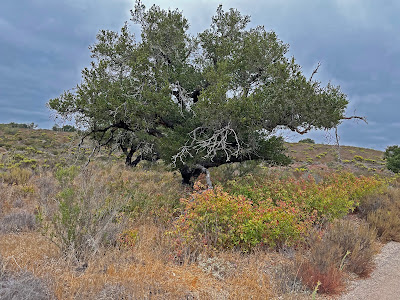 The oaks show the scars of past droughts, with skeletal branches among the new growth. For anyone who hikes or rides in the Central Coast they are the iconic species. 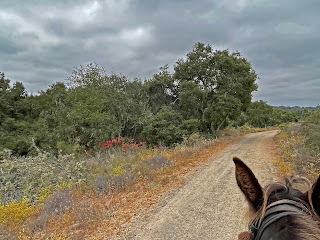 And on the Mission grounds they may have been here since the padres and their Indian converts made this landscape a farm and ranch. 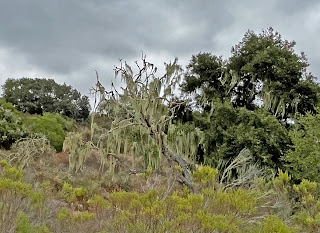 What I have always thought was Spanish Moss festooning our oak and other trees is actually our state lichen, the lace lichen — known by its scientific name, Ramalina menziesii. If you take a closer look at it, the lichen grows in amazing patterns with fine reticulated nets. No two strands look alike. 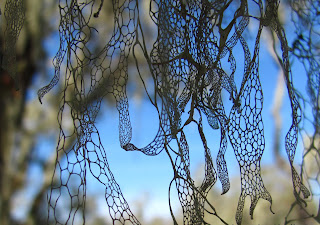 Just another way that nature reveals herself to those who pass slowly across a landscape. 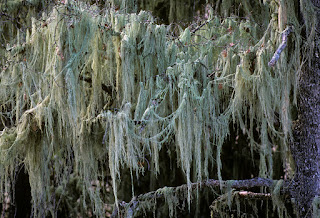 Learn something every day !

The plant communities support a large number of birds and animals also, which we sometimes see or more frequently hear, scurrying about in the underbrush or branches. 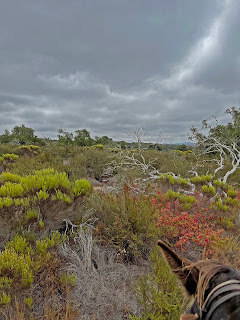 Right now the poison oak is a brilliant red. It is always present, but is more of a hazard when it is camouflaged with the same green as nearby plants. TobeMule likes to eat it, so he does his part to nibble back this pest that can cause such an annoying itchy rash. It has my favorite Latin name: Toxicodendron diversilobum. It has a lovely ring to it. 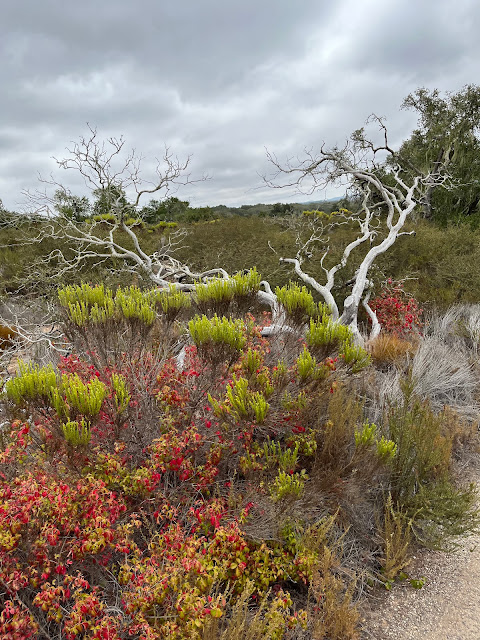 So the toxic in Toxicodendron is a good reason to stay on the path or wear protective clothing if you intend to explore the smaller sandy trails. On top of equines we are well above the bushes of it. 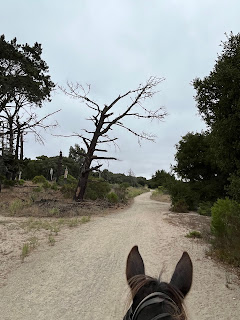 Heading up to the water tanks we pass this stand of snags. When I first started riding here they were a lush group of pines, but after a fire swept through they have slowly fallen one by one. Sometimes we see raptors perched in the branches.

Today we only saw turkey vultures, Cathartes aura, buzzards. They have an eerie presence, always make you look around to see what dead thing they might be circling. They seem so close, but when you try to take a photo with a phone they are just a speck. 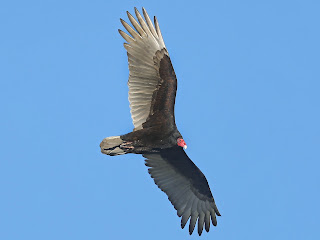 Then, we attained the top of the hill and could look down across the Lompoc Valley. Allow me to brag that having a mule so steady and compliant as to stand utterly still for a panoramic photo is unusual! 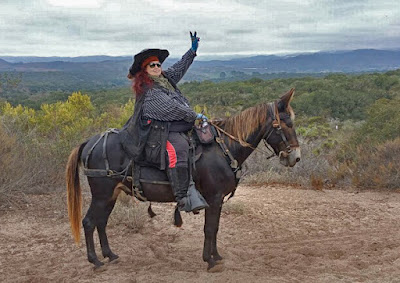 Then here we are taking a break to contemplate the view. Flashing the sign for Victory with Long Ears. 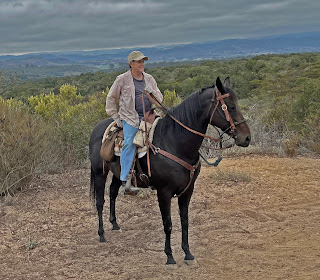 Jamie and Mosca on the height 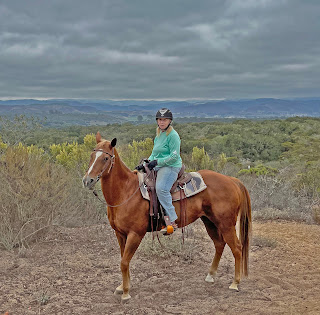 and Kim and Kitty looking pretty.

And so another day has led us to a goal, and we could turn around and sashay back to the trailers and lunch for all.

"The reward of a thing well done is having done it." -- Ralph Waldo Emerson

Thanks.
I like Toby's adventures.
My folks ranch is visible in the trail map.

I love these accounts as I walk here daily. Some references you make infer this was the original location of the working mission. This actually is a WPA project to replace the mission that was located on what is now south F street. Anyone have more historic background on La Purisima mission?

Love following your Toby rides. SB native, but went to the mission for the first time last year. Had no idea how large it is and well preserved

Always refreshing. Thank you. I share these posts with a local trails friend in Eastern WA.

Always enjoy your ride pics! As a long time recreational cyclist I apologize for the inconsiderate rider you encountered, I hope that behavior is in minority of riders you meet.

I stand corrected by FITZ and will make a trip into the interpretive Museum on site to get the real story soon.