Jeff Harms' house at 1247 E. Valley Rd., shown here in May, 2018, was badly damaged in the debris flow. The county is reviewing his plans to rebuild 25 feet from the creek's edge. The house must be elevated nearly six feet off the ground to comply with FEMA flood maps (Photo: Nell Campbell)

Mary Beth Myers figures she’s got a lot to be grateful for. For starters, she’s alive.

On the eve of the catastrophic debris flow of Jan. 9, 2018, Myers couldn’t get a fire going in the chimney of her cottage at 1225 East Valley Road, just below the bridge across Montecito Creek. So she spent the night in downtown Santa Barbara – and awoke to the news that 11 of her neighbors had perished in a river of mud and boulders before dawn.

In all, 23 people died in the disaster. On Myers’ block, along the west bank of the creek, all eight homes were badly damaged or destroyed. Myers’ cottage was swept clean away, leaving only a chandelier dangling from the branch of an oak.

Two years later, Myers is the first on her block and one of the first in Montecito to rebuild from the ground up. Overall, it’s been a slow recovery for those who lost the most.

According to county Planning and Development, of 306 “dwelling structures” marked by building inspectors with red or yellow tags as unsafe to live in after the debris flow, including houses, guest homes, cottages, second units and mobile homes, fully 138, or 45 percent, have not been fully repaired or rebuilt. That number does not include homes that were demolished and have not been rebuilt. And that’s in an affluent community where the median household income is $146,000 per year. 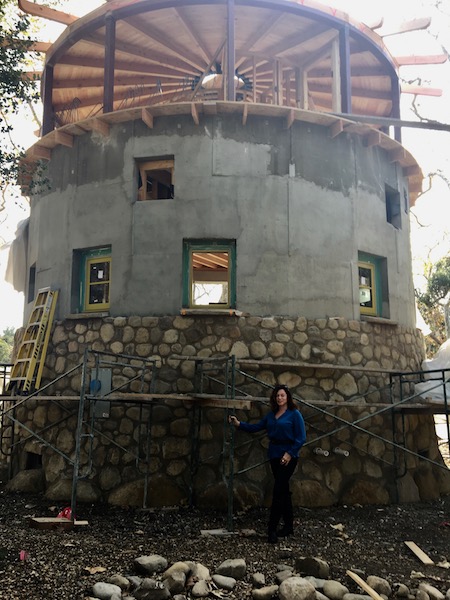 Mary Beth Myers is the first to rebuild from the ground up in the 1200 block of E. Valley Road, where 11 people perished in the debris flow of Jan. 9, 2018. Her new house is a tower built on steel and concrete caissons sunk 22 feet into the ground. The first floor is elevated six feet off the ground (Photo by Melinda Burns)

“The disaster was such an extreme event,” said Joseph Dargel, a county supervising planner. “When you drive through Montecito today, you can see the hardest-hit areas are still empty. The property owners are not coming in because they’re not ready, or they’re still working with the new flood elevations and figuring out what to do.”

Moreover, on 64 properties damaged by the debris flow, including properties with minor damage tagged “green” by building inspectors, the county has not had any contact with the owner or a representative, the data show. That number has barely budged for months; it represents 12 percent of 524 damaged properties.

“We urge any owners who have questions and have not reached out to their case managers to do so,” Dargel said.

Myers’ new home – she hopes to move in this April – is a two-story steel and concrete tower designed by Jeff Shelton, a Santa Barbara architect. It looks like a lighthouse and is anchored to the ground with nine caissons of steel and concrete sunk 22 feet deep. In compliance with the Federal Emergency Management Agency flood map for this location, the first story is elevated six feet off the ground.

The debris flow hurtled through here at about 25 miles per hour, leaving splash marks 15 feet high on giant oaks and sycamores. Somehow, it did not take a bite out of Myers’ postage-stamp-sized lot, less than one-tenth of an acre.

“My creek wall held, among other major favors,” she said. “I’m the luckiest person in town.”

But is it safe to live here, even on caissons? Myers’ lot was created before the county began requiring 50-foot setbacks from creeks. Under a waiver, Myers was allowed to build her tower less than 25 feet from the edge.

Under global warming, scientists say, there will be more frequent wildfires and debris flows. And it’s not the first time the 1200 block of East Valley, formerly a historic community known as “Old Spanishtown,” has been hit: portions of it were obliterated during the massive debris-laden flood of Jan. 25, 1914, including the Chinese laundry and the jail. A debris flow in the wake of the Coyote Fire of 1964 took out bridges and washed away the garage on what is now Myers’ land.

Myers said she had no choice but to rebuild. Before the disaster, she said, she had already invested more than $700,000 in the property and a prior set of building plans. Her cottage was uninsured.

The lure of nature draws her forward, too, Myers said; she’s enchanted by the picturesque woodland and abundant wildlife along the creek. In a “leap of faith,” she said, she even purchased the small lot at 1221 E. Valley, next to her property, as an investment in late 2018. The price was $390,000. Myers said the owners, a couple from Texas, told her they “never wanted to set foot here again.”

“Global warming is everywhere, I don’t care where you choose to hang your hat,” Myers said. “I built the strongest house I can that’s round and fireproof and bolted to the earth. I’m going to have my emergency food and water kit ready. I guess I’m very stubborn. I refuse to live in a state of fear.” 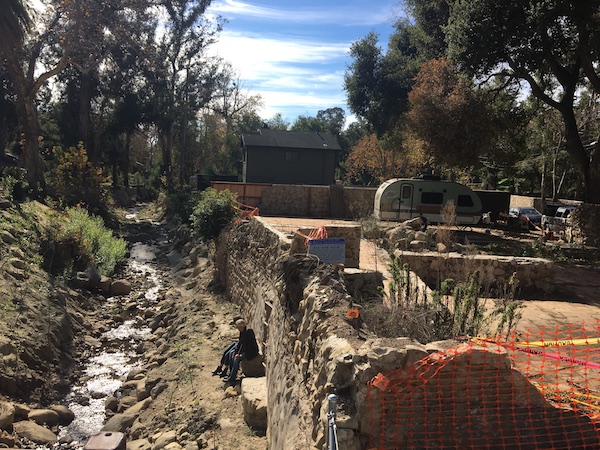 A view of Montecito Creek below the bridge on East Valley Rd. shows slow progress since the catastrophic debris flow of Jan. 9, 2018. The Harms' guest bedroom and garage, shown in the background, survived the disaster, but eight homes on the block, including theirs, were destroyed or badly damaged (Photo by Melinda Burns)

Based on property tax assessments of homes before the disaster, and the ongoing cost of repairs, Robert D. Niehaus, Inc., an economic consulting firm in Santa Barbara, has estimated the full cost of rebuilding in Montecito at $58 million. In a report released last month as a public service, the firm said that at the current rate of construction, it would take the community until early 2029 to fully build back from the Jan. 9, 2018 disaster.

There was an initial six-month delay as survivors waited for FEMA to set new floodwater elevations covering roughly half of Montecito. Uncertainties in the insurance market have caused further delays. Some owners have moved away and some have put up their land for sale. Others have chosen to postpone rebuilding until after the five-year period of highest risk has passed, following the Thomas Fire of late 2017.

Finally, the emotional impact of a disaster that took lives, laid waste to entire neighborhoods and reconfigured the topography of Montecito, cannot be underestimated.

Myers is one of only three Montecitans in the disaster area who have been issued a building permit for a new home, county data show. On Myers’ block, two of her neighbors, including one who lost family members and tenants in the disaster – nine souls in all – have submitted no rebuilding plans to date.

Two others, Jeff and Joel Harms of San Diego, have been waiting since July for a green light from county Flood Control. The couple are the only people living on the block in the wake of the disaster; they stay in a guest bedroom above their garage on weekends. The garage had “breakaway” panels and survived the debris flow, though it filled with six feet of mud. But the house was badly damaged.

The Harmses purchased the Montecito property 12 years ago for their retirement. As proposed, their new 900-square-foot house would be elevated nearly six feet off the ground. The sticking point, Jeff Harms said, is that because the lot is small, the house would be only 25 feet from the creek. The county, he said, wants them to provide a study of creek scouring in that location. (Flood Control officials declined to comment on the case.)

“We’ve got a contractor, I’ve purchased a kitchen to put in there, I’ve got everything lined up,” Harms said. “We’re building a tiny house that has a 100-year life to it. I could start tomorrow. Why can’t we build?” 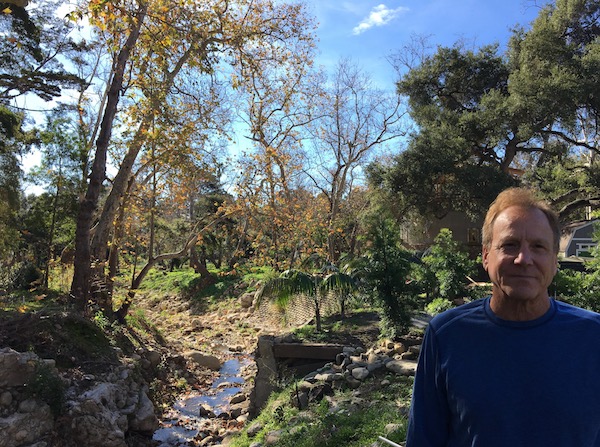 Mark Karpeles' family bought a quarter-acre property at 1231 E. Valley last May as an investment. The family hopes to rebuild the house and a vehicle bridge across the creek that were destroyed at this location (Photo by Melinda Burns)

Banking on the creek

Just downstream, at 1237 E. Valley, Larry Lopez, whose family has owned land in Old Spanishtown since the mid-1880s, has submitted plans to the Montecito Board of Architectural Review for a small Spanish Colonial-style home and carport. His previous home, built in 1914, was destroyed in the debris flow. That night, Lopez had crossed the creek to stay with his family on the east bank; they were able to flee to safety.

Next door to Lopez at 1231 E. Valley, David and Marsha Karpeles purchased the quarter-acre lot for $400,000 from a Sacramento couple last spring as an investment. In the past, they had once owned the property and built a house there. They also own a large house on an acre of land across the creek on the east bank, and an acre of woodland on the west bank.

Mark Karpeles witnessed the raging wave of mud and boulders on Jan. 9, 2018, as it approached the home where he and his parents live on the east bank. He felt the impact as it slammed into the house, filling the basement with eight feet of mud, and he thought he was going to die.

“Sometimes I think about it and remember the fear,” he said. “I think I’ve repressed it a lot. When it hit the house, the noise was unbelievable.”

Nevertheless, Karpeles said, “The odds of this happening again in the next 100 years are pretty remote.” The family still has its old blueprints for a one-story house at 1231 E. Valley, he said, but the new building will be elevated six feet off the ground and moved back an additional 15 feet away from the creek.

“It’s a totally good thing to rebuild,” Karpeles said. “It mends the heart.”

On a recent weekday, standing in her second-floor master suite, which looks out into an oak canopy, Myers said she was looking forward to installing the built-in furniture she ordered from a boat-builder to keep her circular rooms shipshape. Living in her tower, she said, will be like living in a boat that can ply the stormiest of seas.

“It’s been quite a journey,” Myers said. “I never thought the day would come.” 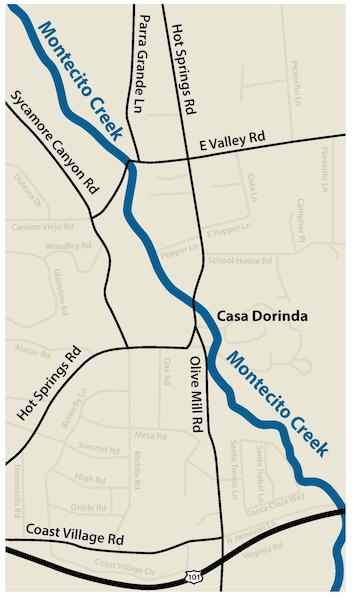 Scour models are notoriously tricky and difficult to run and get valid results out of. Really the assumptions you use in the input dictate the results you will get out of them. It seems like the extensive modeling that FEMA has done should already provide the County with the info they need to make land use planning decisions. If they are outside of the FEMA floodway, they should be allowed to build.

I love it when a survivor states that a recurrence within the next 100 years is "pretty remote." You couldn't pay me enough money to build a home in that area, much less sleep there as a guest. At any time of the year. Ever.

The Dept of Agriculture