Shining and Sharing at the 47th Santa Barbara Writers Conference

The 2019 Santa Barbra Writers Conference was officially opened by Grace Rachow, SBWC Director at a banquet in the Hyatt Hotel in Santa Barbara to a huge crowd of attendees from around the country. The schedule for the conference that ran from June 16-21 was packed with impressive authors, poets, agents, film makers and a bevy of specialty magazine writers who shared their expertise in workshops, panels, private meetings with attendees, as well as giving talks at group banquets and gatherings. The 2019 kick-off dinner event honored author Lisa See with the Ross Macdonald Literary Award, which according to SBWC is bestowed on “a California writer whose work raises the standard of literary excellence.” 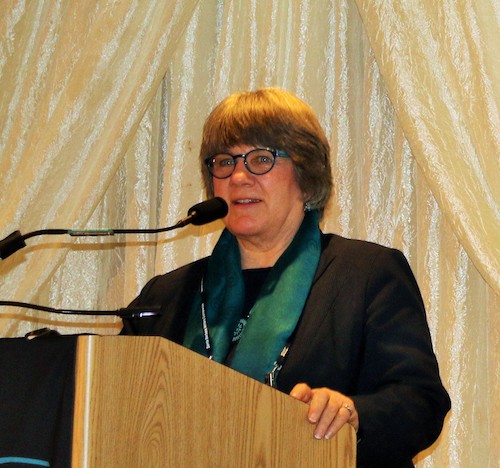 Grace Rachow
Most writers and authors spend the majority of their time alone and working into the night hoping that their story or manuscript will be appreciated, possibly win an award, and actually earn them funds to keep going to the next project. During the opening night author Monte Schulz, son of renowned cartoonist Charles M. Schulz, who says he grew up and learned he was a writer at SBWC gatherings. He indicated writing is a lonely journey and no one should have expectations about getting rich at it, but shared he was genuinely happy he had pursued his wish and worked to become a writer.
The writer's lounge was an exciting center throughout the conference for checking-in, getting information, purchasing the books of workshop and panel authors from the Chaucer's Books table, enjoying conversations over coffee and refining a daily schedule for conference events throughout the week. Kudos to the Hyatt Hotel staff who provided wonderful banquet style dinners, lunches in their restaurant, and a fun atmosphere by the pool for a SBWC cocktail party. I'm always amused while attending events at this hotel remembering it was once considered the 'Western White house Press Center' during the Presidency of Ronald Reagan.
As a travel writer I thoroughly enjoyed the Travel Writing (Nonfiction) workshop of Jerry Camarillo Dunn, Jr. who has done some amazing writing for National Geographic. I am also a big fan of Dale Griffiths-Stamos, author of RenWomen, whose Story Structure for all Genres workshop was fascinating, but I was blown away by the showcase of the short films she has done. It is so exciting to see an author segway into film so successfully! Listening to Catherine Ann Jones, who managed to win some major awards for her work in Hollywood talked about 'Finding Your Voice in Memoir' and her advise was quite interesting and helpful. 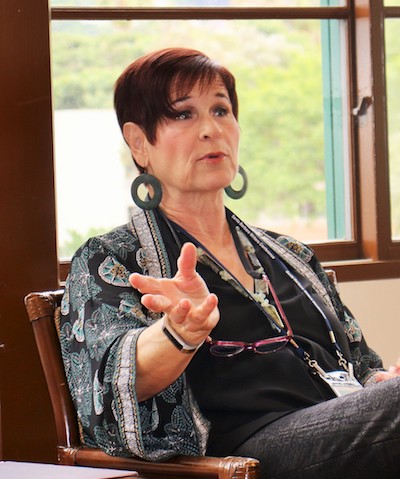 Dale Griffith Stamos
Special thanks to the SBWC staff Y. Armando Nieto, Marianne Dougherty, Ned Bixby, Jim Alexander, Fred Klein, Linda Stewart-Oaten and Director Grace Rachow as well as all the speakers, panel-workshop & pirate speakers & coordinators and the many volunteers for 'bringing it' to the 2019 Santa Barbara Writer's Conference. You were all amazing!
The sweet ending of the conference for me was a very productive panel discussion on Building Your Author Platform, moderated by Marla Miller, that included panelist' Elizabeth Gould, Jake Wachtel, Flor Edwards and Hendrika de Vries. It was a reminder that, when push comes to shove, the individual published author must do his own due diligence in promoting him/herself and their books with a carefully crafted plan on creating an image and making memorable connections using all aspects of communication available to them, especially the web, as well as community and national organizations.
Grace Rachow did a fabulous job, especially as emcee for the closing awards, where winners read their honored works, shared their excitement and thanked SBWC for recognizing their efforts. Such a wonderful experience to see the respect shared by this group of writers, and the helpful tips for success and encouragement being offered. The dates have been chosen for 2020 Santa Barbara Writers Conference and if I'm not in an air balloon floating over Turkey, which is a big one on my bucket list, I will once again be at the inspiring SBWC. For detailed information visit: www.sbwriters.com.
Login to add Comments

Toggle Comments (Show)
Shining and Sharing at the 47th Santa Barbara Writers Conference
Congratulations to Lisa See for being honored with the Ross McDonald (Ken Millar, pronounced Miller) Literary Award.
Please Login or Register to comment on this.

Mattyboy - I hate to poo on

Nice to be reminded of the